Background: Follicular lymphoma (FL) is the most common indolent non-Hodgkin’s lymphoma, with 8% of patients presenting with stage II disease. Stage II FL is potentially curable with radiation therapy (RT), but more than half of patients relapse within 10 years. The Ann Arbor stage II definition encompasses a broad spectrum of disease extents and distributions; understanding how these factors affect outcomes could enable identification of patients at higher risk for progression. The purpose of this study was to investigate the impact of disease extent and distribution on outcomes in stage II FL.

Methods: The study included patients who were diagnosed with stage II or IIE, grade 1–3A FL from 1980 to 2016 at BC Cancer, had non-mesenteric disease, and were treated with curative-intent (≥ 20 Gy) RT alone. Our provincial recommendation was to use curative-intent RT for limited-stage patients, with limited stage defined as stage I or II, non-bulky, radio-encompassable disease with no B symptoms. Prior to February 1998, the provincial policy was to use involved regional RT. In March 1998, the policy was changed to use involved-site RT. Medical records were retrospectively reviewed for patient, disease, and treatment characteristics and outcomes. Survival estimates were calculated using the Kaplan-Meier method starting from the diagnosis date. Events were defined as relapse for freedom from progression (FFP), relapse or death from any cause for progression-free survival (PFS), death due to FL or FL treatment for disease-specific survival (DSS), and death from any cause for overall survival (OS). Univariable analyses (UVA) were performed using the log-rank test, and multivariable analyses (MVA) were performed using the Cox proportional hazards model. Results were considered significant if p ≤ 0.05.

Results: 222 patients were diagnosed with stage II, grade 1–3A FL from 1980 to 2016. 56 patients were excluded due to mesenteric involvement. Of the 166 remaining non-mesenteric patients, 16 were excluded due to treatment with chemoimmunotherapy only, 28 due to combined modality therapy, 3 due to palliative RT, 19 due to management with watchful waiting, and 1 due to treatment refusal. The remaining 99 patients formed our study cohort. The median follow-up duration of living patients was 13.6 years (range, 4.8–35.4). The median age at diagnosis was 59.5 years (range, 33.2–86.2), and 56% of patients were male. Eastern Cooperative Oncology Group (ECOG) performance status was 0 in 68% of patients and 1–2 in 34%. 18% of patients had extranodal disease, 11% had grade 3A disease, 4% had complete resection of disease prior to RT, and 2% had elevated lactate dehydrogenase (LDH). The median greatest diameter of any individual mass was 3.6 cm. 11% had 1 involved lymph node region (staged as IIE due to extranodal disease), 64% had 2 regions, 18% had 3 regions, and 7% had 4 regions. Table 1 shows the FFP, PFS, DSS, and OS at 5, 10, and 15 years for the study cohort. Of the 57 patients who relapsed, 1 (2%) had in-field relapse only, 1 (2%) had in-field and marginal relapse, 9 (16%) had in-field and distant (± marginal) relapse, 2 (4%) had marginal relapse only, 7 (12%) had marginal and distant relapse, 36 (63%) had distant relapse only, and 1 (2%) had unknown site(s) of relapse. On UVA (Table 2), age ≥ 60 years was associated with inferior DSS and OS; greatest diameter ≥ 3.5 cm was associated with inferior FFP and PFS (Figure 1A and 1B); disease involving the paraaortic region was associated with inferior FFP and PFS; and involvement of 4 lymph node regions was associated with inferior PFS (Figure 1D). On MVA (Table 3), greatest diameter ≥ 3.5 cm and involvement of 4 lymph node regions were associated with an inferior FFP and PFS, while older age was associated with an inferior DSS and OS. Bilateral disease, infradiaphragmatic disease, and extranodal involvement did not correlate with worse outcomes on UVA or MVA.

Conclusions: Greatest diameter of disease ≥ 3.5 cm and involvement of 4 lymph node regions are significantly associated with inferior FFP and PFS in stage II FL patients with non-mesenteric disease and treated with curative-intent RT alone. Bilateral disease, infradiaphragmatic disease, and extranodal involvement are not associated with worse outcomes. These results may assist clinicians with identifying specific patients in this population at higher risk for progression, facilitating improved treatment decision-making and patient counselling. 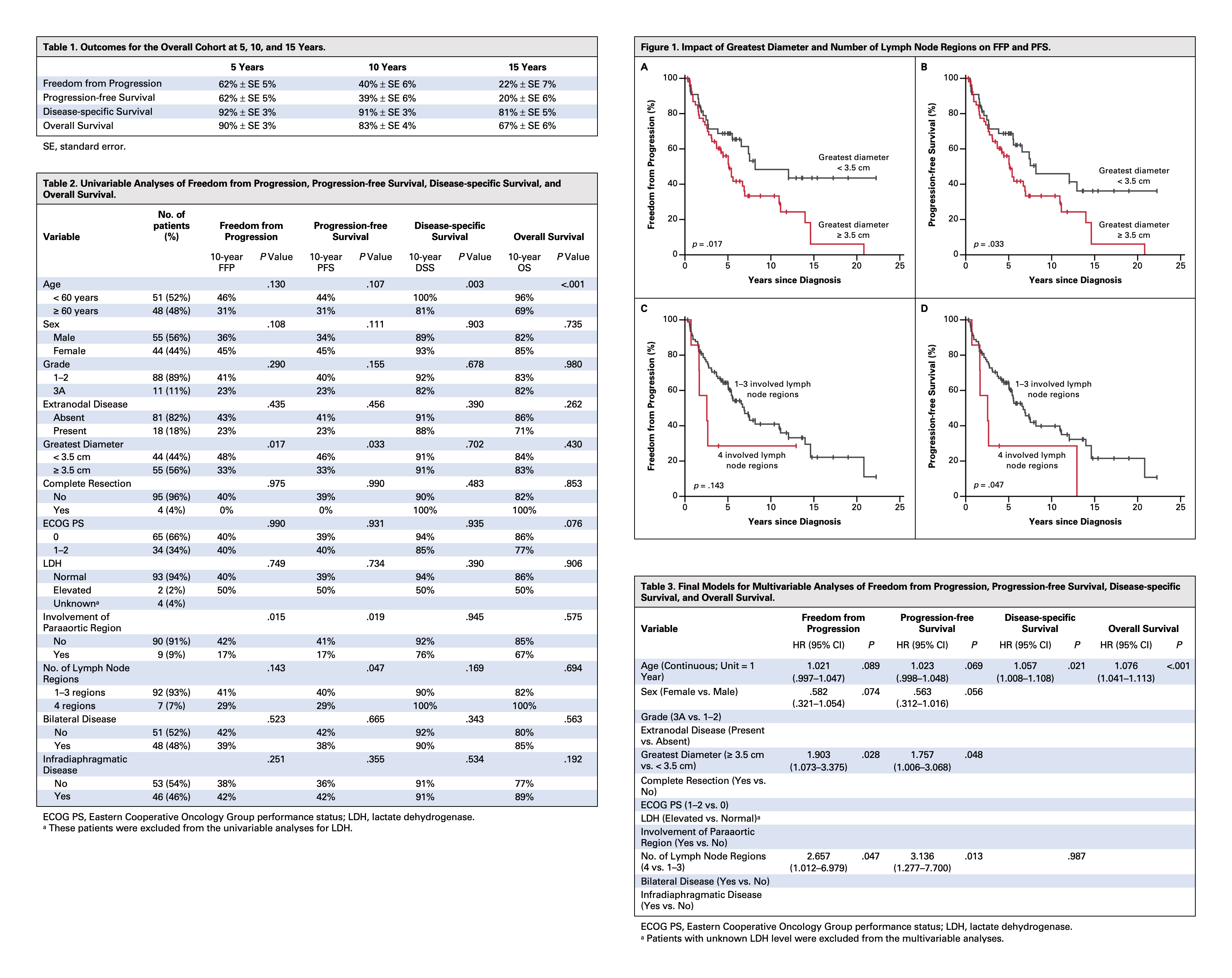