COVID-19, caused by severe acute respiratory syndrome coronavirus-2 (SARS-CoV-2), has become a global pandemic. Patients with hematological disorders are known to be at high risk of morbidity and mortality from COVID-19, and vaccines against SARS-CoV-2 have been rapidly developed. Although mRNA vaccines against SARS-CoV-2 are reported to be effective, efficacy in patients with hematological malignancies who have received anti-CD20 antibody treatment remains unclear. Here, we prospectively evaluated the efficacy of BNT162b2 mRNA COVID-19 vaccine in patients with B-cell malignancies treated with anti-CD20 antibody.

We first evaluated antibody titers in 12 healthy volunteers (median age 75.5 years, range 57–82) and three lymphoma patients undergoing R-CHOP therapy (73, 81, and 81 years old) who had received 2 vaccine doses of BNT162b2 at pre-vaccination, 21 days after the first dose and 14 days after the second dose of vaccination. IgG antibody titers for S1 protein were measured in serum samples by ELISA. In healthy control subjects, titers were clearly increased. In contrast, no patient treated with R-CHOP developed antibodies even after the second vaccination (Figure A). To determine the SARS-CoV-2-specific T-cell reactivity in these three patients, we evaluated interferon (IFN)-γ response to the SARS-CoV-2 spike peptide before and after the second vaccination dose, and detected IFN-γ responses after vaccination in all three patients (Figure B).

Next, to investigate the duration of the effect of anti-CD20 antibody on antibody production to BNT162b2, we enrolled 36 patients (median age 74 years, range 50–87) who had received the final dose of anti-CD20 antibody 48–1320 (median 571) days before vaccination. S1 antibody titers were measured 14 days after the second dose of vaccination. Diagnoses included diffuse large B-cell lymphoma (n = 21), follicular lymphoma (n = 9), lymphoplasmacytic lymphoma/Waldenström's macroglobulinemia (n = 3), and mantle cell lymphoma (n = 3). Thirty-four patients had received rituximab-based and 2 had received obinutuzumab-based therapy, with a median of 6 (range 3–20) courses. No patient had received any chemotherapy after the last anti-CD20 antibody dose. No patient vaccinated within close to one year or sooner after the last anti-CD20 antibody administration showed an increase in titers. Furthermore, titers in most patients were lower than in healthy volunteers even among those vaccinated more than three years after the last administration (Figure C). Finally, we investigated surrogate markers of antibody production ability. We found no relationship between the percent of B-cells (CD19-positive cells) and S1 antibody titers (Figure D), whereas all patients (n = 9) with total IgG level below lower normal limit (< 870 mg/dl) had low S1 antibody titers (< 0.16), below the lowest optical density (O.D.) value in healthy donors (Figure E).

These findings indicate that the antibody-mediated response to vaccination in patients following treatment with anti-CD20 antibody was considerably impaired for an extended time. Alternative protection strategies for these patients are therefore warranted. Although T-cell responses were detected, we recommend that these patients continue to wear a face mask and wash their hands to prevent COVID-19 even after vaccination. 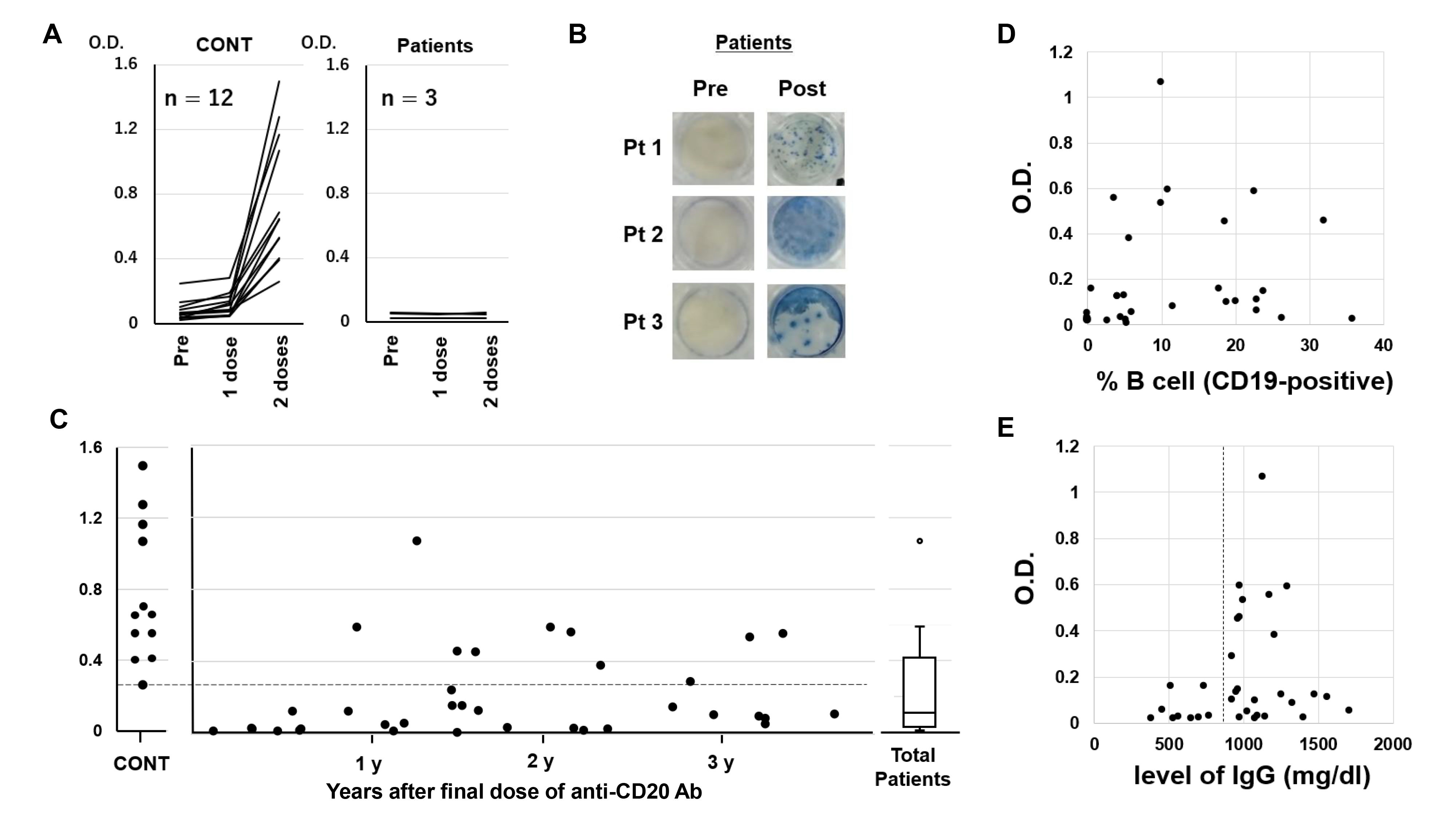