Introduction: CAR T cells in B-ALL have recently focused on the dual targeting of CD19 and CD22 to enhance long term remissions and prevent antigen negative recurrence that is frequently encountered with single antigen targeting. However, a barrier to this approach has been the retention of dual specificity killing and ongoing persistence. PLAT-05 is a multisite phase 1 trial (NCT03330691) that was undertaken to evaluate the safety and feasibility of SCRI-CAR19x22v1, a dual transduced patient-derived product with lentiviral vectors encoding for either a CD19- or CD22-specific CAR, both with 4-1BB co-stimulation. Early results of the first 27 subjects infused demonstrated feasibility and a favorable safety profile with encouraging CR rates. Products were fractionated evenly between CD19 CAR, CD19+CD22 CAR and CD22 CAR. However, engraftment was predominated by the single CD19 CAR population, leading to unsuccessful eradication of CD19-CD22+ leukemia. This finding led to re-engineering the CD22 CAR construct for enhanced CD22 targeting, and re-initiation of dose finding with the new product, SCRI-CAR19v2.

Methods: After enrollment, subjects undergo apheresis followed by a combined CD4/CD8 positive immunomagnetic selection and seeded at a prescribed ratio for co-culture in a closed-system G-Rex bioreactor. Following anti-CD3xCD28 bead stimulation, T cells are transduced with two lentiviral vectors that encode for either a CD19- or CD22-specific CAR. After flu/cy lymphodepletion, CAR T cells are infused at one of three dose levels: 0.5, 1 or 3 X 106 CAR T cells/kg. Toxicity is graded according to CTCAEv5 except for CRS and ICANS which are graded per ASTCT criteria. Leukemic response and CAR T cell persistence are evaluated by flow cytometry.

Results: 14 subjects enrolled onto PLAT-05 for the SCRI-CAR19x22v2 dose escalation and products were successfully manufactured in all subjects with an average of 8.9 days in culture (range 7-12 days). In contrast to v1 products, the CAR composition of v2 products was skewed in favor of CD22 CAR expression, with median expression of each population as follows: 42% CD22 only, 33% CD19 and CD22, 3.2% CD19 only. Twelve subjects were infused (0.5x106/kg n=3, 1x106/kg n=3, 3x106/kg n=6), 11 of whom had prior exposure to CD19 or CD22 targeted therapies with diverse expression of CD19 and CD22 on the leukemic blasts. No dose limiting toxicities occurred in the 11 fully evaluable subjects (1 subject is pending) and the recommended phase 2 dose was determined as 3x106 CAR+ cells/kg. CRS was present in 45% of subjects, all grade 1. Neurotoxicity occurred in 45% of subjects, all grade 1 except a single self-limited grade 3 ICANS event (due to a single time point CAPD score). 91% of infused subjects obtained a CR, of which 100% were MRD negative. The non-responder had persistent disease that was CD19-CD22-. The in vivo engraftment of CAR T cells peaked most frequently between day +7 and +14 and was predominated by the CD22 CAR T cells, with some minimal contribution of dual and CD19 CAR T cells. Of the 4 subjects who had previously received an FMC63 based CD19 CAR, expansion was due to solely to the CD22 CARs in all 4 subjects, with apparent rejection of the T cells expressing CD19 CAR.

Conclusions: We demonstrate enhanced activity of SCRI-CAR19x22v2 compared to v1, now with dual activity against both CD19 and CD22 demonstrated by elimination of ALL with single antigen expression. We maintained encouraging CR rates with a favorable toxicity profile. Interestingly, the product is predominated by CD22 CAR and CD19/CD22 CAR populations, while in vivo engraftment is predominated by single CD22 CAR expressing T cells. Subjects exposed to prior CD19 murine based CAR rejected the CD19 CAR but engrafted the CD22 CAR with demonstratable activity, a potential advantage of a dual transduced product. The impact of lower CD19 CAR engraftment on durable remissions is unknown. While limited expansion of the CD19 CAR population could be protective against exhaustion, the uneven engraftment of the CAR populations may ultimately lead to single antigen targeting. Optimization of transduction may be required for a more balanced product to maintain dual targeting and give further insight into the behavior of dual-expressing CAR T cells. An expansion cohort is currently underway to further characterize engraftment kinetics and in vivo performance to best inform future development of this product. 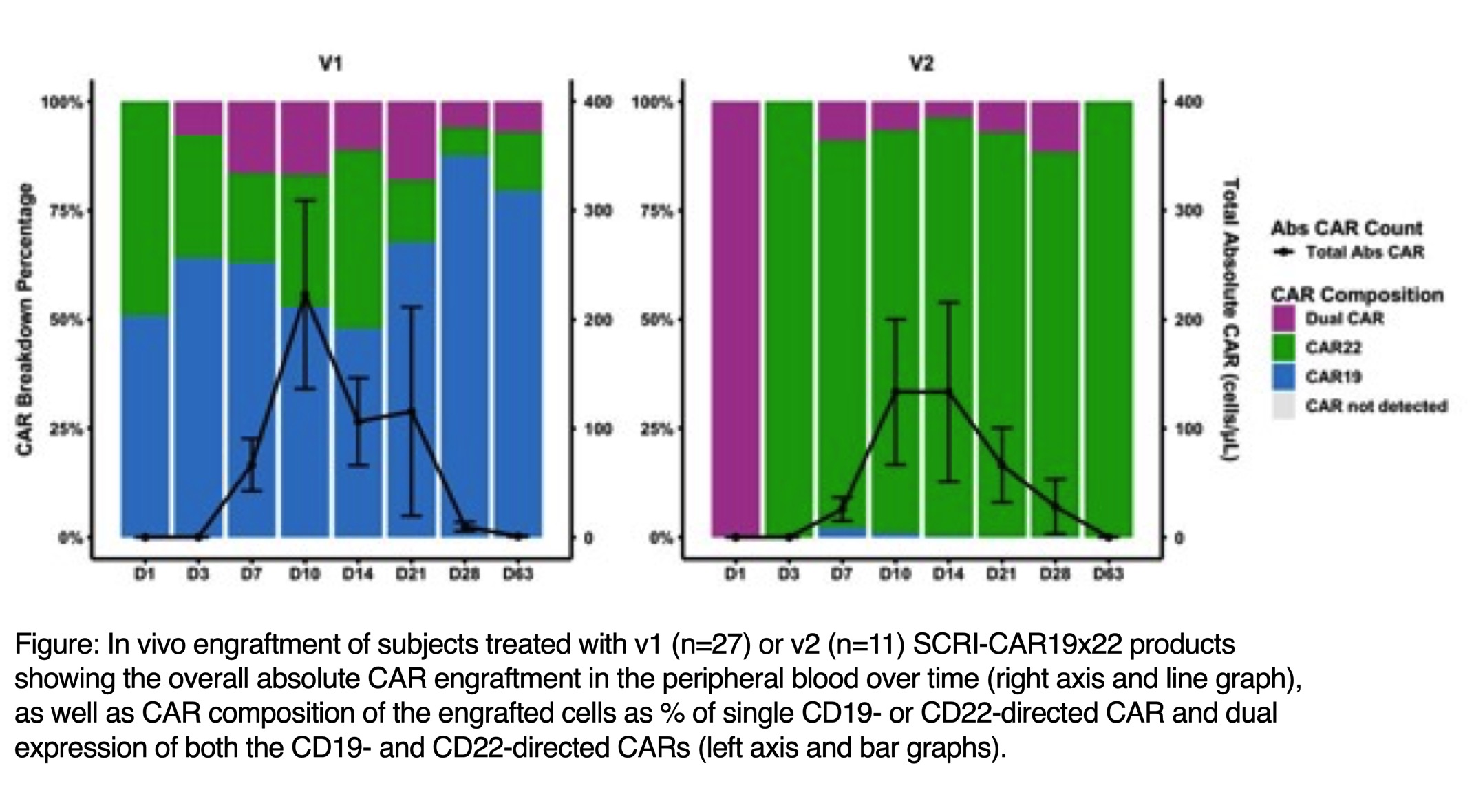 OffLabel Disclosure: investigational use of SCRI-CAR19x22 will be discussed