Introduction: Tyrosine kinase inhibitors (TKIs) are the standard of care for patients with chronic myeloid leukemia in chronic phase (CML-CP). The advent of TKIs has led to improvements in survival, with a life expectancy nearly matching that of the general population. However, TKI failure rates increase with subsequent lines of therapy, leading to worse overall survival in patients in later lines of therapy. There are 5 approved TKIs (imatinib [IMA], bosutinib [BOS], dasatinib [DAS], nilotinib [NIL], and ponatinib [PON]) that may be used based on patient characteristics. IMA is frequently used in first-line (1L) therapy. Second-generation TKIs (BOS, DAS, and NIL) can be used in the 1L or second line (2L) depending on choice of 1L therapy. Use of PON is reserved mostly for patients with T315I mutations due to its adverse event profile. However, little guidance exists concerning which TKI to use in the third line and beyond (3L+). Here we present the results of a real-world evidence study of treatment patterns of TKIs in patients with CML-CP initiating 3L+ TKI therapy.

Methods: This is a noninterventional, descriptive cohort study based on secondary use of data from 3 existing CML registries (Czech INFINITY, Dutch PHAROS, and Swedish CML). The observation period was from January 1, 2008, until the last available date of follow-up for each registry (6-12 years depending on the registry). Patients aged ≥18 years with CML-CP initiating a 3L TKI after registry enrollment were included in this analysis. Exposure was defined by TKI treatment with IMA, DAS, NIL, BOS, and PON. Descriptive statistics were used to describe patient demographics and treatment duration. Alluvial diagrams were used to describe and represent all treatment patterns.

Conclusions: Based on these real-world treatment patterns (which may provide insights into TKI access in various settings), patients in the 3L were most frequently treated with the second-generation TKIs NIL and DAS, with a smaller proportion treated with BOS and PON. However, no common agreement in sequencing of TKI treatment was seen across the 3 registries. Duration of treatment was longest in patients receiving NIL and DAS. Treatment discontinuation occurred frequently due to both R to and I of the 3L TKI used. Between 12.8% and 35.7% of patients that started a 2L TKI required 3L+ therapy, and therefore additional treatment options that are efficacious and well tolerated are needed for these patients.

This study was a research collaboration between Novartis and the 3 registries and was funded by Novartis. 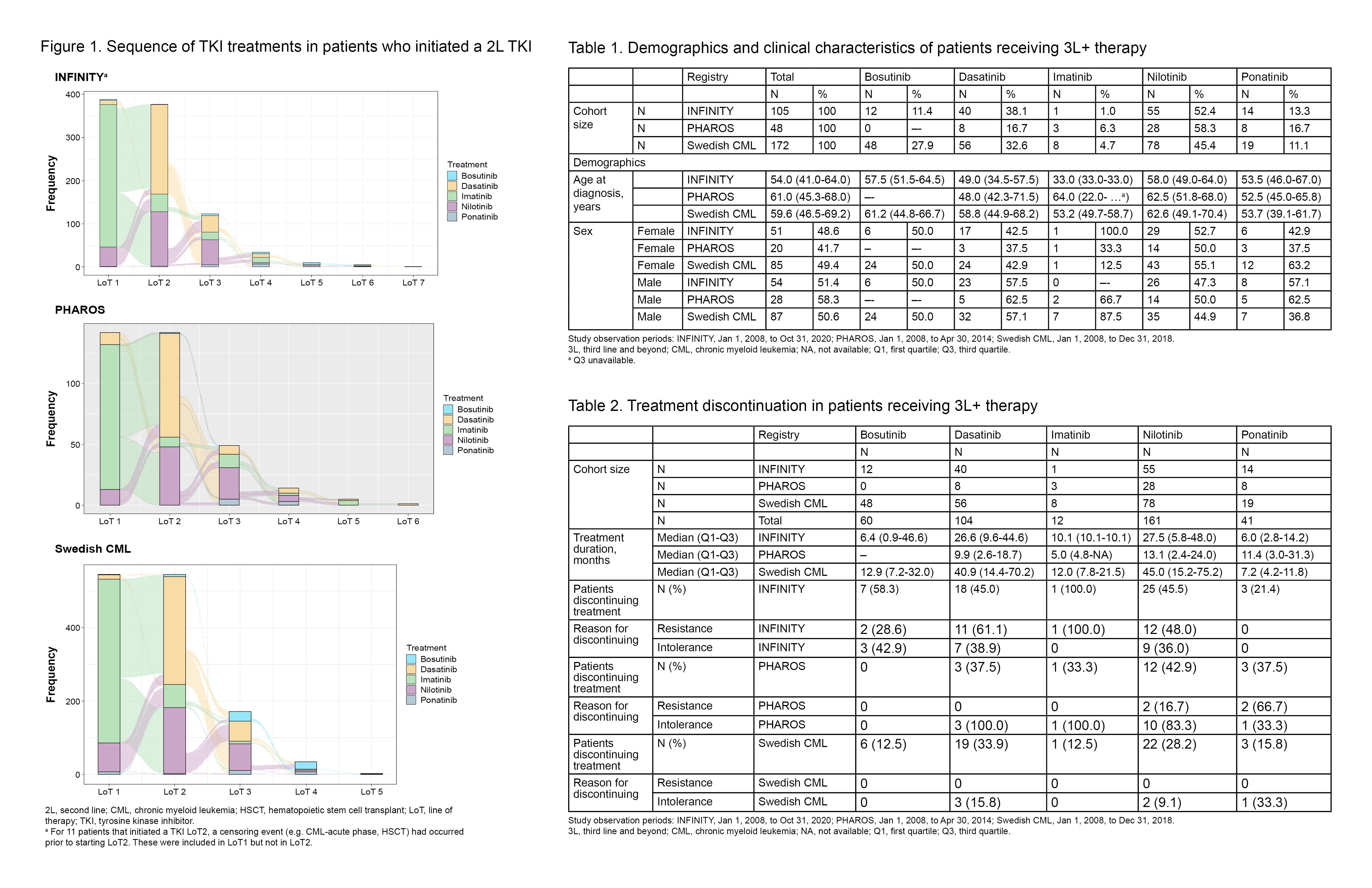