Background: Overexpression of the nuclear export protein exportin 1 (XPO1) mediates the functional inactivation of tumor suppressor proteins (TSPs), facilitates the export of oncogene mRNA thus facilitating oncoprotein expression, is associated with poor prognosis in multiple myeloma (MM), and contributes to immunomodulatory drug (IMiD) resistance. Selinexor is an oral, first-in-class, selective inhibitor of nuclear export (SINE) compound that by blocking XPO1 forces the nuclear retention and activation of TSPs and nuclear retention and inactivation of oncoproteins.1 Selinexor is approved with low-dose dexamethasone ± bortezomib for patients with previously treated MM. Pomalidomide plus dexamethasone (Pd) has an overall response rate (ORR) of ~30% and median PFS (mPFS) of ~4 months in patients with MM refractory to bortezomib and lenalidomide. We hypothesized that selinexor could be safely combined with Pd (XPd) and would improve the combination’s efficacy.

Methods: In the XPd arm of the multi-arm Phase 1b/2 STOMP study, selinexor was evaluated at 60, 80, or 100 mg in combination with Pd. Study objectives were to determine the maximum tolerated dose and recommended Phase 2 dose (RP2D) and to assess the safety and activity of the XPd regimen. The dose of selinexor 60 mg once weekly (QW), pomalidomide 4 mg once daily (days 1-21), dexamethasone 40 mg QW (XPd-60) was the lowest evaluated dose of selinexor in combination with the approved dose of Pd, and in light of the marked efficacy of that dose (ORR 65%), Phase 2 cohorts at a lower (40 mg weekly) dose of selinexor (XPd-40), were evaluated. Of the 19 patients enrolled at XPd-40 and evaluable for efficacy, 12 patients were enrolled into STOMP and 7 patients were enrolled at the same dose level and similar inclusion criteria into a parallel study XPORT-MM-028.

Conclusions: Selinexor, once weekly, can be safely combined with Pd in patients with relapsed MM. The all-oral combination of XPd is highly active with an ORR of 65% at XPd-60, the RP2D, and an ORR of 42% at XPd-40 dose level (compared to expected ORR ~30% for Pd). The high ORR that was achieved at the RP2D, including in patients previously treated with anti-CD38 mAb, supports XPd-60 as a promising therapy with no significant cross-resistance to anti-CD38, PIs or lenalidomide. No new safety signals were identified. The most common TEAE, neutropenia, is a common AE of Pd and was managed effectively with standard G-CSF. The regimen leverages the concept of mechanism switching from an anti-CD38 mAb-based regimen to a selinexor-based regimen. These data support the new Phase 3 study (XPORT-MM-031) with an all-oral combination of XPd vs elotuzumab-Pd in patients who have been previously treated with lenalidomide, a PI, and an anti-CD38 mAb. 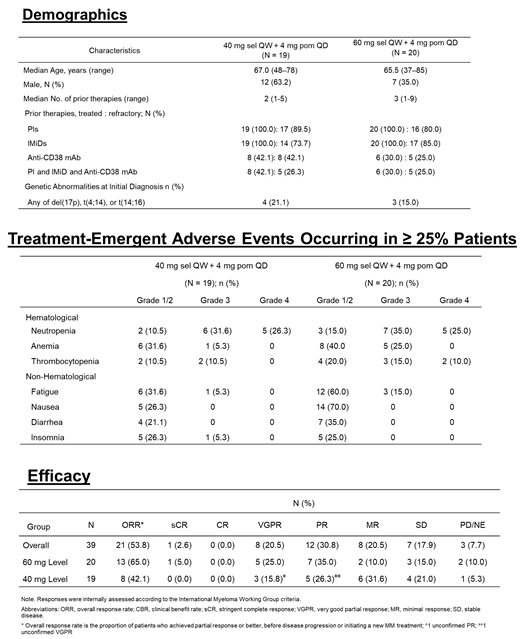