Introduction: Loncastuximab tesirine (loncastuximab tesirine-lpyl; Lonca) is an FDA-approved CD19-directed antibody-drug conjugate (ADC) indicated for the treatment of adult patients with relapsed or refractory (R/R) large B-cell lymphoma after ≥2 lines of systemic therapy, including patients with high-grade B-cell lymphoma. In the Phase 2 LOTIS-2 trial (NCT03589469), Lonca was evaluated as a single agent in patients with R/R diffuse large B-cell lymphoma (DLBCL) and the overall response rate (ORR) was 48.3% (Caimi PF, et al. Lancet Oncol. 2021;22:790-800). In an analysis of the 11 patients from the LOTIS-2 clinical trial with high-grade B-cell lymphoma with MYC and BCL2 and/or BCL6 rearrangements (HGBCL; data cutoff: April 6, 2020), 45.5% (n=5) achieved an overall response. In this patient subgroup, the median duration of response was 13.37 months, and the median progression-free survival was 9.13 months. The aim of this analysis (data cut off: March 1, 2021) was to further characterize the clinical characteristics and efficacy of Lonca in patients with HGBCL enrolled in the LOTIS-2 clinical trial.

Methods: The methodology for the LOTIS-2 trial has been published. Briefly, Lonca (0.15 mg/kg for the first 2 cycles followed by 0.075 mg/kg for subsequent cycles) was administered as a single 30-minute infusion, once every 3 weeks for up to 1 year, until progressive disease or unacceptable toxicity. The primary outcome was ORR defined as the proportion of patients with best overall response of complete response (CR) or partial response (PR), assessed by independent review. Investigator assessment of histopathology according to the 2016 WHO classification was used to define HGBCL.

Conclusions: Efficacy data from this small subgroup of patients with HGBCL enrolled in the LOTIS-2 clinical trial are consistent with the overall trial population. These results suggest that Lonca is active in the treatment of this high-risk lymphoma subgroup, achieving comparable response rates with other risk groups and with long-term disease control in responding patients. 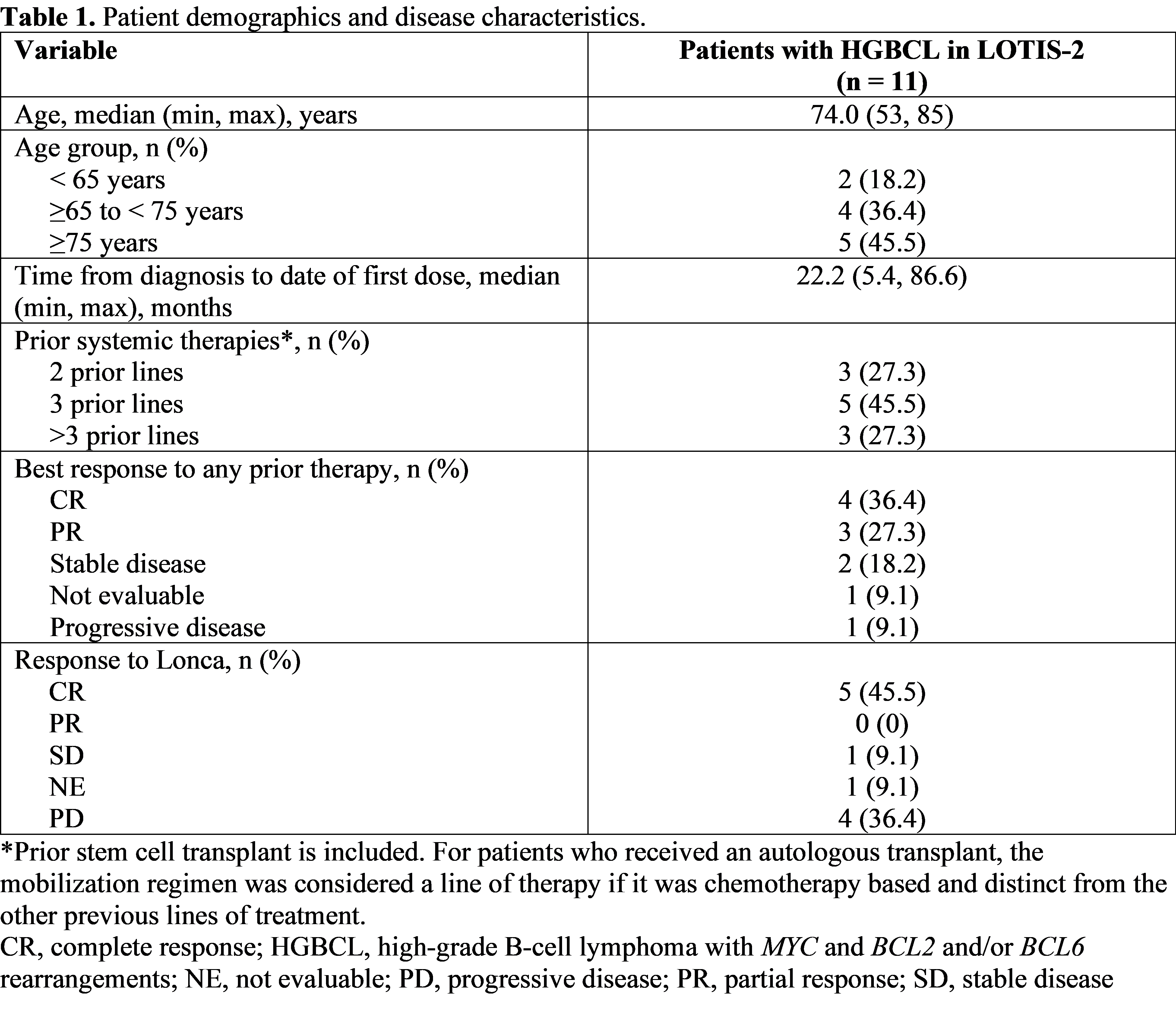