Aim: To evaluate Progression-Free Survival (PFS) for patients with R/R CLL 12 months after MRD guided treatment cessation of venetoclax + ibrutinib (V+I) treatment (arm B) with the option to reinitiate V+I based on MRD reappearance.

Results: 225 patients were enrolled: median age 68 years (range 36-87), median CIRS score 2 (range 0-12), Binet stage B/C 84%, IGHV unmutated: 64%, TP53 aberrations (deletions and/or mutations): 24%. Planned treatment until randomization was completed by 194 (86%) patients, 8 patients went off protocol due to toxicity, 5 (2%) patients died during the first two cycles of ibrutinib lead-in (unknown cause, myocardial infarction, intracranial hemorrhage, Richter’s transformation and tick-borne viral encephalitis), 15 patients went off protocol due to refusal to continue or other reasons and 3 patients progressed. At cycle 15, 81 (36%) patients achieved uMRD in both PB (112, 50%) and BM (84, 37%) and overall responses were 86%, of which 145 pts (64%) CR(i). Patients with uMRD were randomized to ibrutinib maintenance arm A (n 24 11%) or observation arm B (n 48 21%). Patients who did not achieve uMRD (n 125, 56%) continued ibrutinib maintenance without randomization while 5 patients went off protocol.

The primary endpoint of the trial was met; PFS was achieved for 47 (98%) of 48 patients randomized to observation arm B at 12 months after randomization (27 months after starting therapy). One patient died during observation due to myelodysplastic syndrome and 1 patient, without sign of progression, reinitiated per protocol due to MRD positivity. A similar proportion of uMRD patients randomized to ibrutinib maintenance (arm A) or observation (arm B) remained uMRD after 12 months (month 27 after treatment start); 75% and 71%, respectively; see figure. No difference in blood uMRD at cycle 15 was seen neither between TP53 aberrated/wildtype (uMRD: 46%, 52%) nor between IGHV unmutated/mutated patients (uMRD: 50%, 50%). 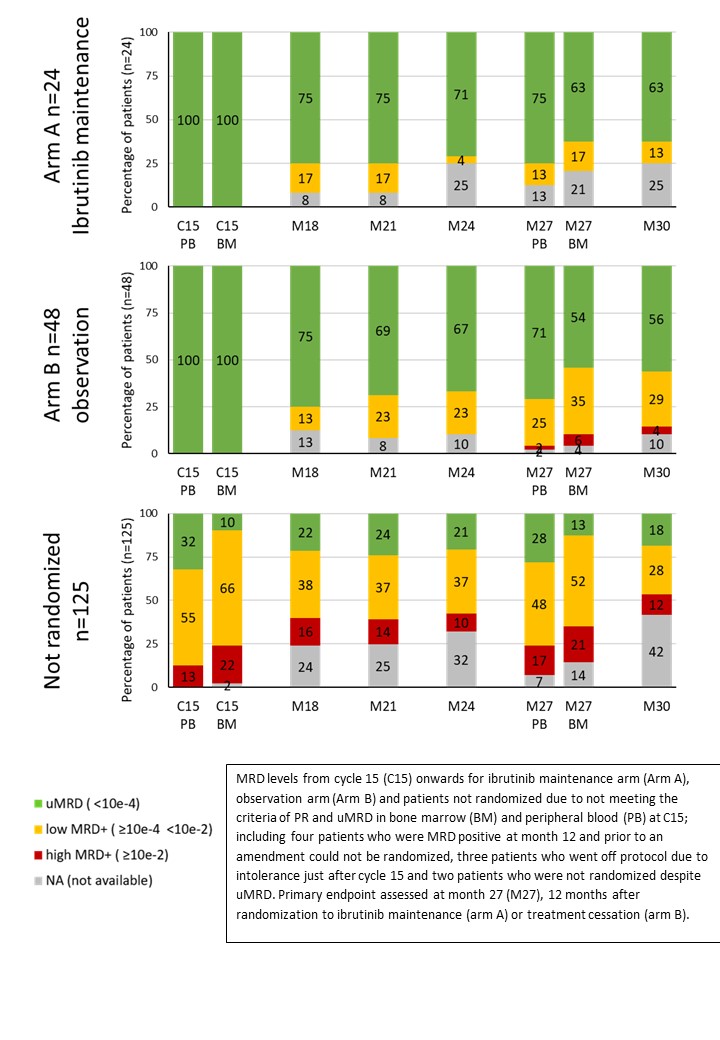