Smoldering multiple myeloma (SMM) is an asymptomatic precursor condition to multiple myeloma (MM). Emerging data from clinical trials indicate that – compared to watchful monitoring – initiation of therapy at the SMM stage might be indicated. Currently, there is no established screening for SMM in the general population and therefore patients are identified incidentally. Here, we define for the first time, epidemiological and clinical characteristics of SMM in the general population based on a large (N>75,000) population-based screening study.

The iStopMM study (Iceland Screens Treats or Prevents Multiple Myeloma) is a nationwide screening study for MM precursors where all residents in Iceland over 40 years of age and older were invited to participate. Participants with a positive M-protein on serum protein electrophoresis (SPEP) or an abnormal free light chain (FLC) analysis entered a randomized controlled trial with three arms. Participants in arm 1 continued care in the Icelandic healthcare system as though they had never been screened. Arms 2 and 3 were evaluated at the study clinic with arm 2 receiving care according to current guidelines. In arm 3 bone marrow testing and whole-body low-dose CT (WBLDCT) was offered to all participants. SMM was defined as 10-60% bone marrow plasma cells on smear or trephine biopsy and/or M-protein in serum ≥3 g/dL, in the absence of myeloma defining events. Participants in arm 3 were used to estimate the prevalence of SMM as bone marrow biopsy was performed in all participants of that arm when possible. The age- and sex-specific prevalence was determined with a fitted function of age and sex, and interaction between those. Diagnosis at baseline evaluation of the individuals in the study was used to define the point prevalence of SMM.

Of the 148,704 individuals over 40 years of age in Iceland, 75,422 (51%) were screened for M-protein and abnormal free light chain ratio. The 3,725 with abnormal screening were randomized to one of the three arms, and bone marrow sampling was performed in 1,503 individuals.

Based on a large (N>75,000) population-based screening study we show, for the first time, that the prevalence of SMM is 0.5% in persons 40 years or older. According to current risk stratification models, approximately one third of patients have an intermediate or high risk of progression to MM. The high prevalence of SMM has implications for future treatment policies in MM as treatment initiation at the SMM stage is likely to be included in guidelines soon and underlines the necessity for accurate risk stratification in SMM. 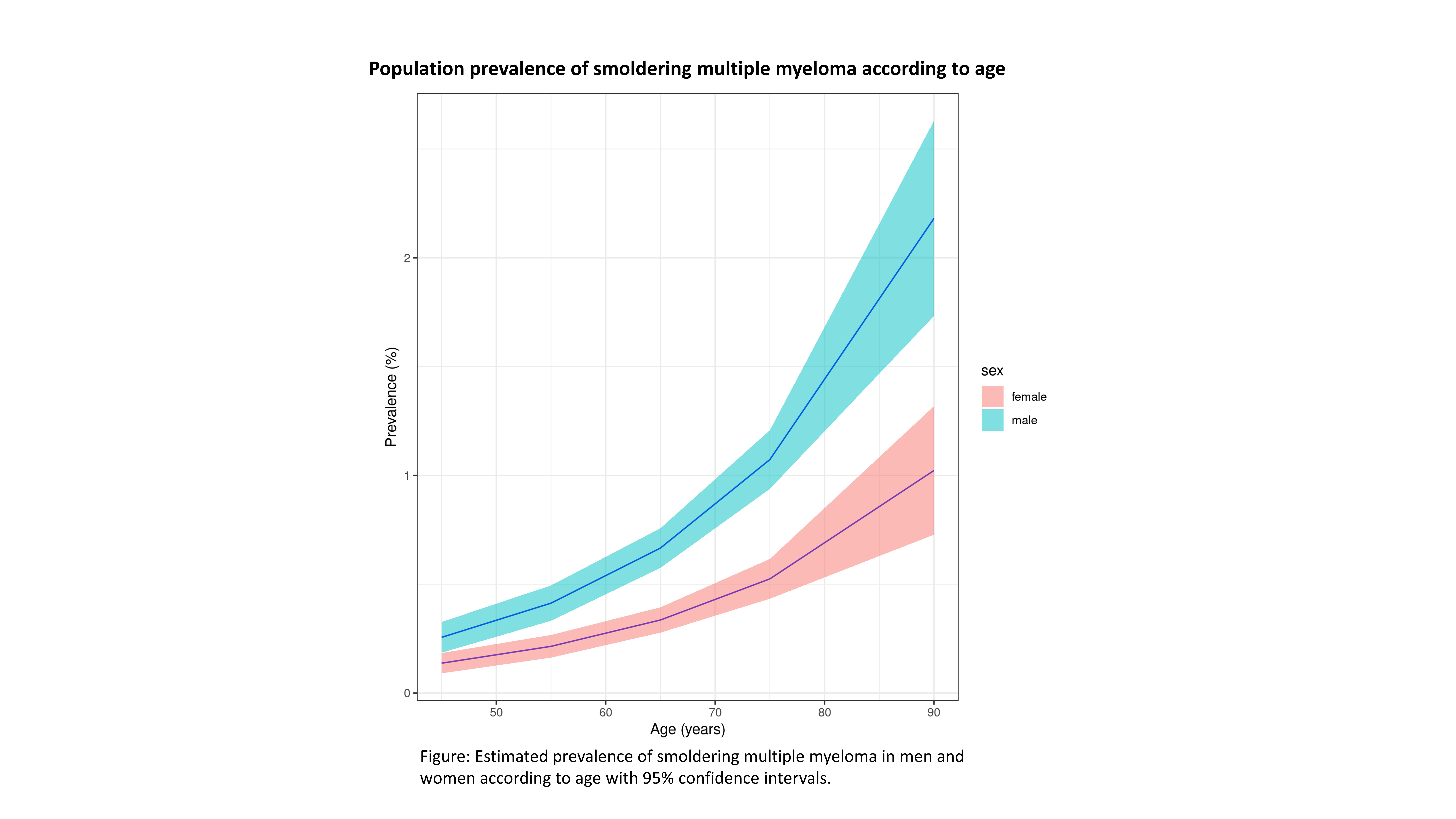 See more of: 652. Multiple Myeloma and Plasma cell Dyscrasias: Clinical and Epidemiological: Monoclonal Gammopathies of Determined Significance: What We Have and What We Want
See more of: Oral and Poster Abstracts
Previous Abstract | Next Abstract >>
*signifies non-member of ASH