The development of resistance to standard and novel therapies remains the main obstacle to cure in acute myeloid leukemia (AML). Metabolic rewiring has emerged as a therapeutically actionable vulnerability in AML, where specific metabolic adaptations arising as a result of driver mutations or in response to therapy have been reported. Mannose phosphoisomerase (MPI) is the first enzyme in the mannose metabolism (MM) pathway, that leads to the production of GDP-Mannose, a key sugar donor for N-glycosylation reactions. MPI was amongst the top drop-out genes in our published CRISPR-Cas9 screen aiming to identify sensitizers to FLT3 tyrosine kinase inhibitors (TKI) in AML carrying activating FLT3 internal tandem duplication (ITD) mutations (Gallipoli et al., Blood 2018). Moreover, analysis of published genomic datasets indicates that MPI expression levels are higher in AML compared to normal samples, correlate with patient outcome (A) and further increase in paired relapsed to diagnosis samples. We therefore hypothesized that MM and MPI inhibition sensitize AML cells to both FLT3-TKI and standard chemotherapy and tested this in preclinical models.

We show that genetic and chemical MPI inhibition sensitizes FLT3WT and FLT3ITD AML cell lines in vitro to standard cytarabine chemotherapy and FLT3-TKI respectively and these effects are rescued by the addition of MPI downstream product mannose. We validate these findings in vivo using MPI knock-out (KO) cell line xenografts and in vitro using primary AML samples following MPI knock-down (B). We also demonstrate a lack of toxicity to normal CD34+ cells.

We link this metabolic defect to the specific activation of the ATF6 arm of the unfolded protein response (UPR) due to a reduction in protein glycosylation in MPI KO cells. We validate this by demonstrating that activating or inhibiting ATF6 respectively phenocopies or rescues the effects of MPI KO (E) and show this to be secondary to ATF6 driving FAO inhibition, via transcriptional downregulation of PPARα, a master regulator of lipid catabolism.

Finally, we show that accumulation of PUFA in MPI KO cells is accompanied by reduced cysteine levels and increased markers of oxidative stress and lipid peroxidation, such as 4-hydroxynonenal (4-HNE), all features associated with ferroptosis (F). We validate this by showing that combining FLT3-TKI with MPI KO leads to ferroptotic cell death in AML cells, which can be rescued by the radical-trapping antioxidant ferrostatin.

We provide further evidence to support the role of metabolic rewiring in driving therapy resistance in AML and show for the first time that targeting MPI and MM sensitizes AML cells to cytarabine and FLT3-TKI. Mechanistically we unveil a novel connection between MM and fatty acid metabolism, via activation of the ATF6 arm of the UPR, leading to cellular PUFA accumulation, lipid peroxidation and ferroptotic cell death. Finally, our findings also suggest that triggering ferroptosis can be leveraged as a therapeutically actionable mechanism driving cell death in therapy-resistant AML cells. 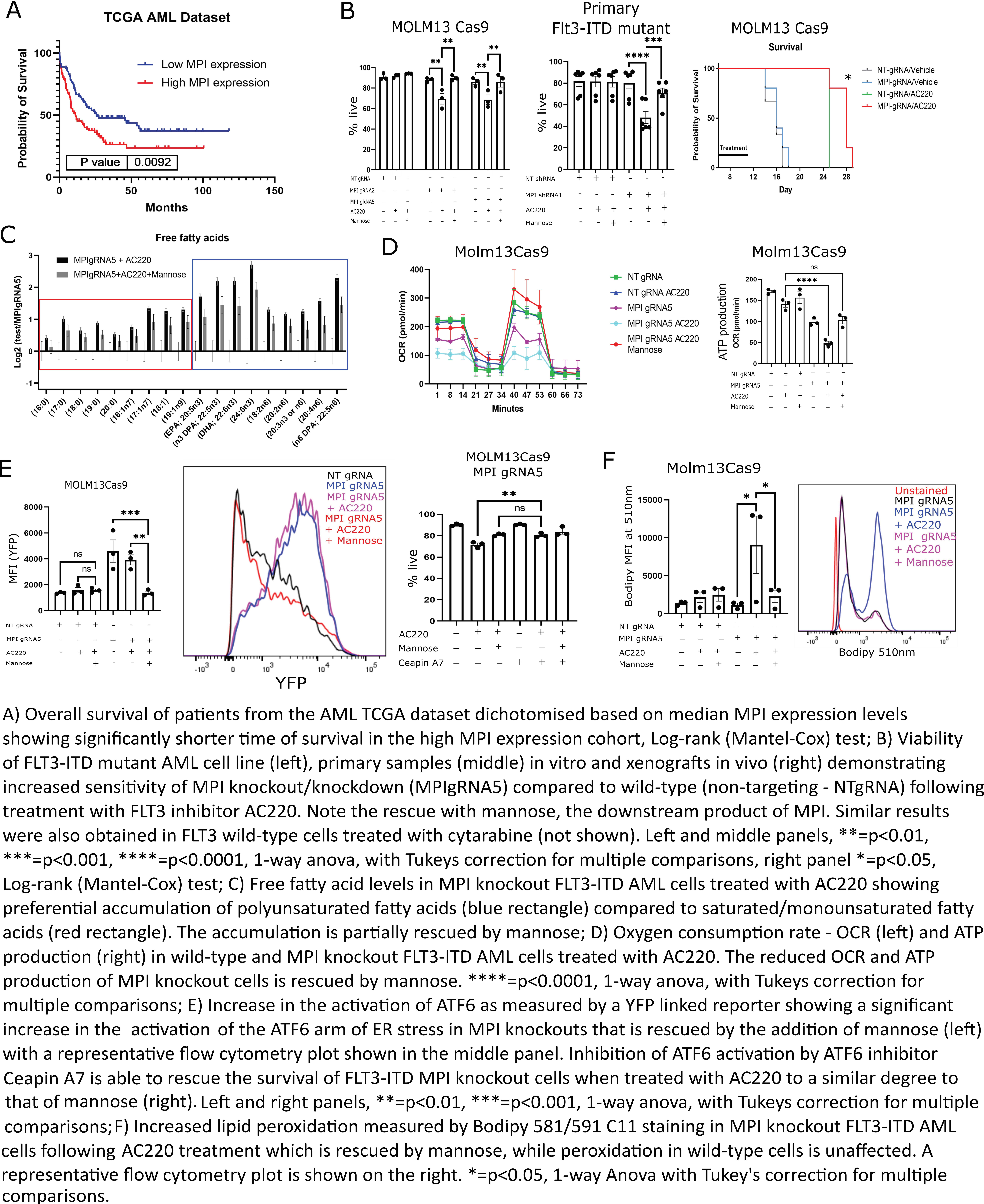 Disclosures: Vassiliou: Kymab Ltd: Divested equity in a private or publicly-traded company in the past 24 months; STRM.BIO: Consultancy; Astrazeneca: Consultancy.