Depth of response is associated with long-term outcomes in multiple myeloma (MM); however, the effect of response kinetics on outcomes in NDMM is variable and less clear. Although some studies have shown that achieving a ≥very good partial response (VGPR) at 4 months (mos) from diagnosis is associated with increased overall survival (Garderet Leukemia 2018), other reports have shown worse outcomes in pts with early vs late responses (Yan Blood Adv 2019). The double-blind, randomized TOURMALINE-MM2 (NCT01850524) trial (Facon Blood 2021) showed a clinical meaningful progression-free survival (PFS) benefit with IRd vs pbo-Rd (median 35.3 vs 21.8 mos; hazard ratio, 0.830; 95% confidence interval, 0.676-1.018; P=0.073; median follow-up, 53.3 and 55.8 mos, respectively) in NDMM pts. Safety data were consistent with the established toxicity profile of IRd. We evaluated PFS and duration of response (DOR) by depth of best confirmed response and time to best response in TOURMALINE-MM2.

Pts were randomized to receive oral ixazomib 4 mg (n=351) or placebo (n=354) on days 1, 8, and 15, plus oral lenalidomide 25 mg (10 mg if creatinine clearance ≤60 mL/min) on days 1–21 and oral dexamethasone 40 mg (20 mg in pts aged >75 years) on days 1, 8, 15, and 22 in 28-day cycles. After 18 cycles, treatment was continued without dexamethasone and reduced doses of ixazomib (3 mg) and lenalidomide (10 mg) until progressive disease (PD)/toxicity. Response assessments were performed every cycle until PD, or every 4 weeks in pts who discontinued treatment prior to PD. PFS and DOR were analyzed post-hoc in subgroups defined by depth of response and in subgroups defined by time to best confirmed response; ‘early’ and ‘late’ responses were defined by time to best confirmed response of 0–4 and >4 mos, respectively (additional analyses were performed by time to best confirmed response of 0–6 and >6 mos). Pts in either subgroup could have recorded an initial response prior to their best response. PFS and DOR were evaluated from randomization to progression and time of initial response to progression, respectively. To address potential guarantee-time bias in the PFS analysis, and to eliminate potential bias due to transient responses in DOR analysis, sensitivity analyses were conducted in pts with PFS / DOR of ≥6 mos.

Achieving a deeper response was associated with prolonged PFS and DOR in NDMM patients in TOURMALINE-MM2. PFS benefit on the ITT analysis was driven by the higher rates of deep responses (≥VGPR) with IRd vs pbo-Rd. PFS and DOR were also longer in pts achieving a late vs early best confirmed response of ≥PR or ≥VGPR. Consistent with results from a similar analysis in relapsed/refractory MM in the TOURMALINE-MM1 trial (Garderet Leukemia 2018), our findings support the continuation of therapy with the aim of achieving a deeper response over time. Additional sensitivity analyses will be presented. 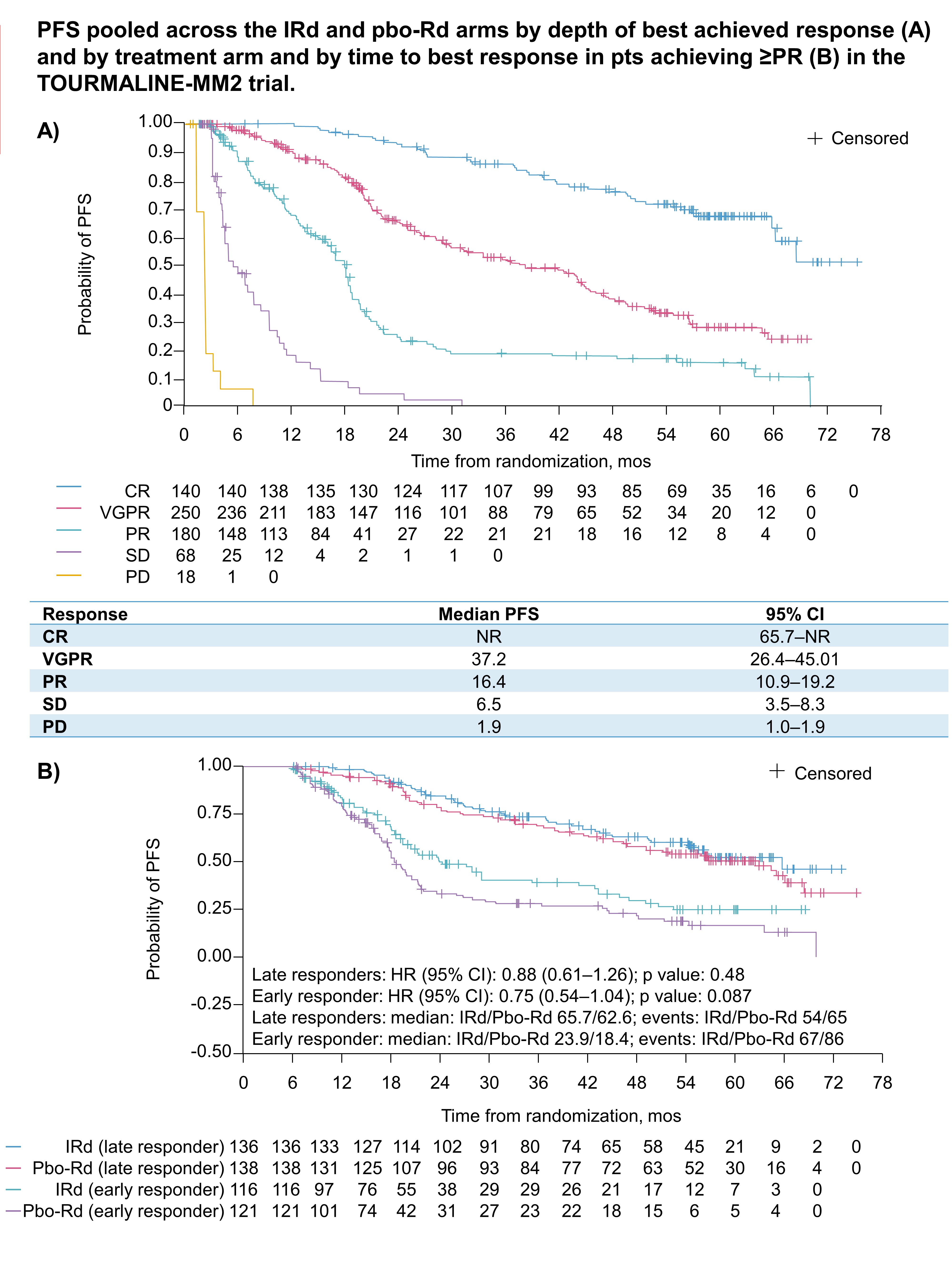 OffLabel Disclosure: Use of the oral proteasome inhibitor ixazomib in newly diagnosed multiple myeloma patients who are ineligible for transplant.