Childhood cancer survivors are confronted with a variety of chronic health conditions as a consequence of their life saving therapy. Chemotherapy is the cornerstone of childhood cancer treatment, which consists of combinations of various drugs administered over multiple years. Most chemotherapeutic drugs act by fatally damaging the DNA or blocking the replication thereof. Although high-intensity chemotherapy efficiently eradicates tumor cells, the impact on the genomes of normal, that is noncancerous, cells remains unknown. Mutagenicity of cancer treatment on normal hematopoietic cells may contribute to the development of chronic health conditions later in life, such as therapy-related acute myeloid leukemia (t-AML). Here, we characterized the mutational consequences of chemotherapy in the genomes of hematopoietic stem and progenitor cells (HSPCs) of children treated for cancer.

This study was approved by the Biobank and Data Access Committee of the Princess Máxima Center for Pediatric Oncology and all samples were obtained via the in-house biobank. We performed whole-genome sequencing (WGS) on multiple single HSPCs from all patients as well as the t-AML if available. In case of t-AML patients, samples were taken before t-AML treatment. Data on mutation accumulation in HSPCs of healthy individuals from 0-63 years of age was previously acquired. To distinguish the effects of different chemotherapies, we developed an in vitro approach using cord blood HSPCs to experimentally define the mutational consequences of individual chemotherapeutic drugs in primary human cells.

Our cohort consisted of 22 pediatric cancer patients of which we obtained bone marrow aspirates and/or peripheral blood from timepoints pre- and post-treatment for their first cancer. We included 17 t-AML patients with varying first cancer diagnoses and five acute lymphoblastic leukemia (ALL) patients who did not develop t-AML. Patient characteristics and therapy information is described in Table 1. We compared the mutational burden of pre- and post-treatment HSPCs of the childhood cancer patients to those of healthy treatment-naïve individuals. HSPCs at time of first diagnosis of childhood cancer patients displayed a mutation burden similar to HSPCs of healthy individuals. In contrast, post-treatment HSPCs showed a significantly higher increase in mutation number over time than expected by normal ageing. We used mutational signature analysis to pinpoint the causes of this increased mutation burden in post-treatment HSPCs. Surprisingly, in most of these HSPCs the additive mutational effect could be attributed to clock-like processes, active during normal aging. Only few chemotherapeutic drugs showed direct mutagenic effects, such as platinum drugs and thiopurines. Whereas cisplatin-induced mutations could be observed in all cells exposed to this drug, thiopurine-induced mutations were present in a subset of the exposed HSPCs. These differences in thiopurine-induced mutagenesis across multiple exposed HSPCs could even be observed within individual patients. In one patient, the HSPCs containing the thiopurine-signature shared the oncogenic MLL-rearrangement with the t-AML blasts and had shorter telomeres compared to the HSPCs without this signature. This finding indicates that these cells have undergone more cell divisions, suggesting that thiopurine-induced mutagenesis requires DNA replication. We also identified novel therapy-associated mutational signatures. One of these signatures was observed in multiple patients who received a hematopoietic stem cell transplantation, as part of their cancer treatment, after which they displayed a viral reactivation for which they were treated. By WGS of in vitro exposed cord blood HSPCs, we demonstrated that this signature is caused by the antiviral drug ganciclovir, which is commonly used to treat cytomegalovirus infections. The second signature was present in HSPCs of a patient who received a combination of thiotepa and treosulfan.

Enhanced mutation accumulation after pediatric cancer treatment is caused by both direct and indirect mechanisms. The variance in mutagenic effects of (chemo)therapies on healthy HSPCs may influence the risk an individual patient has to develop t-AML and could, in future, play a role in t-AML risk assessment of pediatric cancer survivors and the development of new treatment regimens. 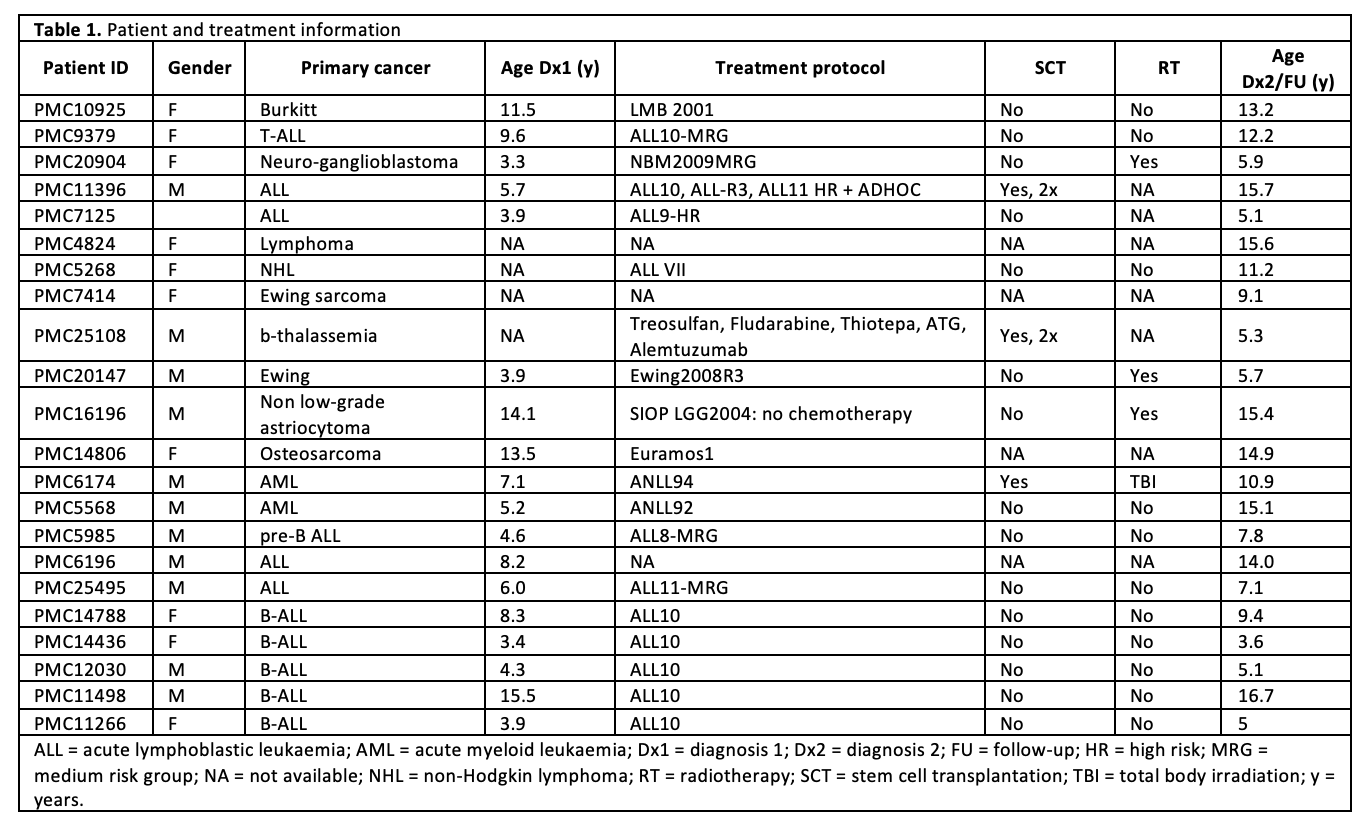