Background: With the dramatic success of tyrosine kinase inhibitors (TKI) to treat Chronic myeloid leukemia (CML), the life expectancy of CML patients is now close to that of the general population. In addition, treatment cessation is now a realistic goal for some CML patients. This was shown by several clinical trials such as the STIM study leading to the concept of TFR (treatment free remission). Around 40-60% of patients with stable DMR [deep molecular response, corresponding to <0.01% BCR-ABL (IS)] can stop the TKI successfully, e.g. in accordance with recommendations from the European LeukemiaNet. In the interim analysis of the first 200 patients of the EURO-SKI (European Stop TKI) trial, 62% were in major molecular response (MMR: <0.1% BCR-ABL1 IS) at 6 months. DMR duration before TKI stop was most predictive for maintenance of MMR. Here we present the final analysis of the EURO-SKI trial after 3 years of follow-up.

Methods: Adult CML patients in chronic phase CML on TKI treatment in confirmed DMR for at least one year (confirmed by three consecutive PCR tests) and under TKI treatment for at least 3 years were eligible. DMR confirmation was performed in standardized laboratories. Primary endpoint was maintenance of MMR after stopping TKI. According to protocol, a 36 months follow-up was planned. The null hypotheses were that MMR maintenance at 6 and 36 months was less or equal than 40% and less or equal than 35%, respectively.

Regarding prognostic factors, we confirmed that TKI treatment duration and DMR duration were still the most important factors to predict MMR loss at 6 months. For the late recurrence, i.e., between 6 and 36 months (57 patients), TKI treatment duration before stop was the only relevant variable in a preliminary univariate logistic analysis.

Summary/Conclusion: With this final analysis of the largest TFR trial, we confirm the MRecFS and MRecTFS rates at 6 months previously obtained from the interim analysis. However, late molecular recurrence (15% between 6 and 36 months) occurred and the underlying mechanisms need to be discussed. Nevertheless, 46% of the patients, were still in MRecTFS at 3 years. 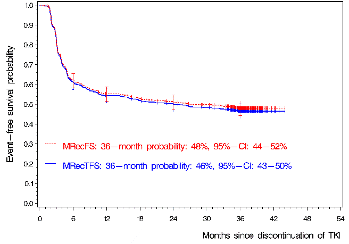