552 Correlative Biological Studies Related to the Response, Peak and Persistence of ARI0002h, an Academic BCMA-Directed CAR-T Cell, with Fractionated Initial Infusion and Booster Dose for Patients with Relapsed and/or Refractory Multiple Myeloma (RRMM)

Background: ARI0002h is an academic autologous CAR T-cell product with a 4-1BB co-stimulatory domain and a humanized single chain variable fragment targeting BCMA, which is being tested in the CARTBCMA-HCB-01 clinical trial for patients (pts) with RRMM (NCT04309981). A fractionated infusion of 3x106 CAR+ cells (ARI0002h)/kg (10/30/60%) was administered after lymphodepletion regimen (LR). A second dose of 3x106 CAR+ cells/kg was planned starting at 4 months after the first dose, with or without LR according to persistence of CAR-T in peripheral blood (PB). Clinical results have been submitted in a separate abstract (#147188); here we present the correlative biological studies performed and related to disease response.

Methods: ARI0002h production data were obtained and analyzed, including % CAR transduction in the final product (FP) by flow cytometry (FC). PB samples were obtained at inclusion and sequentially after infusion. Bone marrow (BM) samples were obtained at inclusion, at d28, d100 and at 6 months (m), to evaluate BCMA expression on plasma cells (PCs) and minimal residual disease (MRD) by next generation flow (NGF) with 10-6 sensitivity. Apheresis, FP, and PB/BM samples on d28 were analyzed for T-cell subpopulations and surface markers. Persistence of ARI0002h was evaluated in PB after infusion by PCR. If a second infusion was administered, CART detection after 3 and 7d was also checked. Plasmatic soluble BCMA (sBCMA) was determined by ELISA prior to infusion, at d28 and if a relapse was observed. Human anti-human antibodies (HAHAs) were evaluated at d100 (using FC on transduced HEK cells). Clinical and response data were collected for analysis.

Results: Mean BCMA molecules/cell on malignant BM PC at inclusion were 1306 (SD ±889) with non-significant (NS) correlation with response at d100. Thirty-three apheresis were obtained and transduced, with a median manufacturing time of 11d (range 9-14). All FP were successfully obtained at first attempt but one, which could be produced with a second apheresis. The mean % transduction of ARI0002h on autologous T cells was 56% (SD ±25). A higher CD4/CD8 ratio in the apheresis was correlated with achievement of stringent complete response (sCR) (p=0.003); this association was not observed in the FP. Moreover, T-cell subpopulations in the FP did not correlate with response (Figure 1A). A significant increase of PD-1 (p=0.0001), TIGIT (p=0.037) and LAG3 (p=0.003) expression was observed in CD4 CAR-T cells, as well as PD-1 in CD8 (p=0.0001), between the FP and d28 PB paired samples; similar results were observed in BM CAR-T cells at d28, except for LAG3 (Figure 1B).

ARI0002h CAR-T cells showed maximum PB expansion at 14d (range 7d – 5m). Among pts with 3 and 6 m follow-up, 54% and 24% had evidence of CAR+ T cells in PB, with a median persistence of 4m (range 2-not reached). Expansion levels by PCR and PB persistence did not correlate with MM response. 22 out of 27 eligible pts (81%) received a 2nd dose, with a subsequent CART expansion in 10 of 20 (50%) evaluable pts; LR was readministered in only 30% of these 10 pts. B-cell aplasia was observed in all pts concurring with CART expansion (Figure 1C). Also, a decline in B-cell counts was observed in some pts after reinfusion, with no association with response.

Patients with detectable sBCMA at inclusion became sBCMA negative in all the subsequent tested samples at d28 and d100. None of these pts have relapsed. 27 pts had MRD assessed at day +100. In 3, the BM was severely hemodiluted and inadequate for MRD testing. Of 24 MRD-evaluable pts, 22 (92%) were MRD-negative (59% were negative at a sensitivity of 1x10-6, 36% at 1x10-5 and 5% at 1x10-4), and 2 were MRD positive (one BCMA positive and another with BCMA undetermined result).

Only 1 of 27 (4%) evaluable pts had positive HAHAs at day 100. CAR-T cells were undetectable at day 70 in this patient, but after receiving a 2nd dose at m4 a short-lasted expansion was observed. Despite that, the patient deepened the response from partial response (PR) (d100) to very good PR (m6).

Conclusion: ARI0002h production is fast and feasible. The peak of CART expansion occurs after 14d of infusion and also in some pts after reinfusion, regardless of LR, which suggests that LR may not be mandatory to allow further expansion after booster dose. Responses obtained are deep and construct immunogenicity seems to be low. 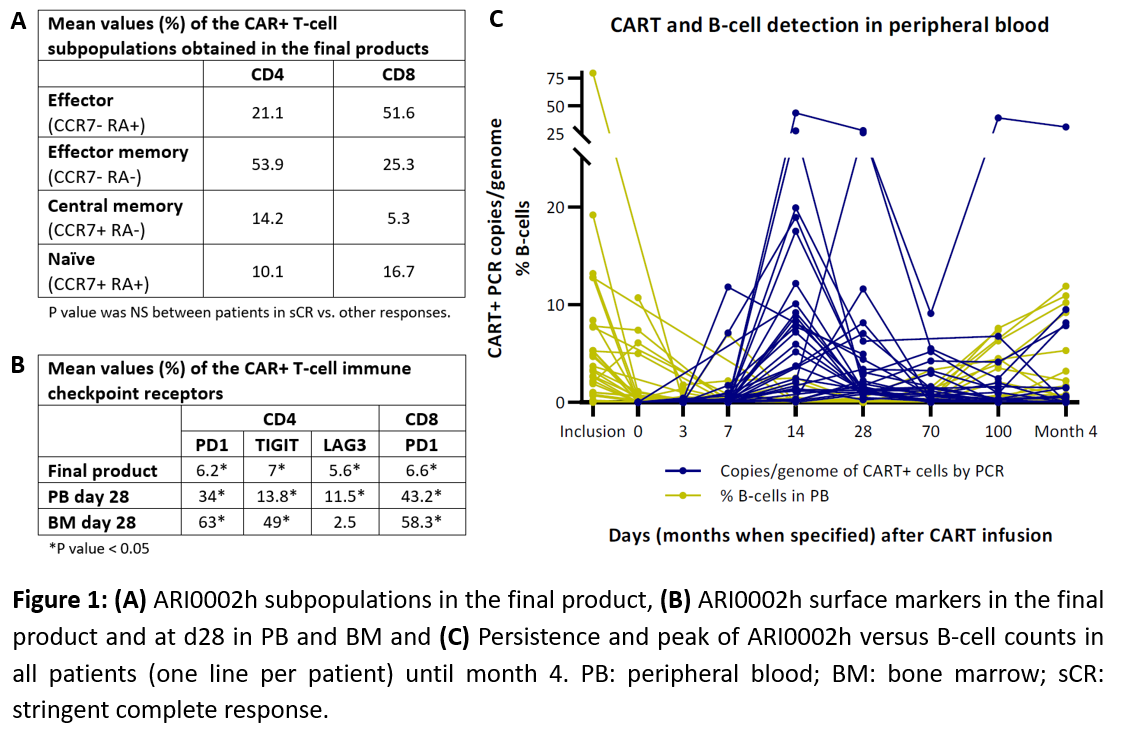