The novel kappa (κ) myeloma antigen (KMA) has been described and a specific monoclonal antibody KappaMab (formerly MDX-1097) developed which is currently in a Phase IIb clinical trial. In this study 2 human LambdaMabs (10B3 and 7F11) were shown to specifically bind to a conformational epitope in the lambda (λ) light chain constant region when it is held in non-covalent association with lipids in the cell membrane (LMA). The 10B3 Mab binds to all λ isotypes and 7F11 binds to isotypes 2 and 3; neither antibody binds κ light chain or immunoglobulin (Igλ or Igκ).

Patient BM samples (κ=43 and λ=22) included Monoclonal Gammopathy of Undetermined Significance (MGUS), untreated and treated multiple myeloma (MM) patients, AL amyloidosis, plasmacytoma and Waldenstroms macroglobulinemia (WM). Multiparametric FCM immunophenotyping was performed with the 10B3 Fab’2 fragments and CD38, CD138, CD269 (BCMA), CD319 (SLAM F7), CD56 and CD45 Mabs. Plasma cells (PCs) were identified by the co-expression of CD38 and CD138, then CD138+/CD38+ gated cells were analyzed for 10B3 or KMA, CD269, CD319, and CD56. KMA and LMA Fab’2 fragments were used as negative controls for each other. The antigen density of KMA or LMA versus BCMA on PCs in 55 samples was assessed using Quantibrite beads.

Immunohistochemistry (ICH) tissue cross-reactivity studies using validated automated methods on tissue with whole antibody 7F11-biotin and 10B3-FITC were performed on MM cell lines, λ myeloma lung tissue (plasmacytoma) and a panel of 38 normal human tissues. Serial sections from snap frozen blocks were used to retain the conformational epitope and then stained with the λ Mabs and visualised by light microscopy.

Expression profiles for patient BM samples (Table 1) showed KMA was expressed on PCs from untreated (N=9/17; 53%) and treated (N=8/11; 73%) MM samples, whereas BCMA expression was 88% (N=15/17) and 82% (N=9/11) respectively. BM PCs from all 3 plasmacytoma cases and 1 WM case were positive for both KMA and BCMA. BM PCs from MGUS cases were all positive for BCMA and positive for KMA in half the cases studied. The expression of KMA and CD56 was highest on PCs from treated MM patient samples. Antigen density for KMA and BCMA was similar in the untreated patients. In treated patients KMA density was higher than BCMA, other samples had lower antigen density of both KMA and BCMA.

LMA (Table 2) and BCMA were expressed on 50% and 90% of untreated MM samples and all LMA+ samples co-expressed BCMA but only 1 co-expressed CD56. All treated λMM samples expressed BCMA and 60% expressed LMA. LMA was positive on PCs from the 3 amyloidosis samples, BCMA was expressed weakly in only 1 of these whereas CD56 was always co-expressed with LMA. MGUS and WM samples did not express LMA. Similar to KMA, the antigen density of LMA and BCMA was equivalent in untreated patients but in treated patients LMA density was higher than BCMA. All 3 amyloidosis samples were λ isotype.

IHC results showed that 10B3 and 7F11 bound to myeloma cell lines and 10B3 bound to PCs in λ plasmacytoma sections. Both Mabs bound occasional PCs or dendritic cells in the GI tract mucosa, tonsil and various secondary lymphoid organs. No off-target binding of 10B3 and 7F11 was observed and both antibodies bound occasional PCs in secondary lymphoid tissue.

These studies used mostly myeloma samples and a small number of other plasma cell dyscrasias. Nevertheless expression of KMA and LMA was identified on PCs across the spectrum of disease. Within the treated patient cohort the antigen density of KMA or LMA was higher than that of BCMA and implies there is an enrichment of these novel antigens in relapsed refractory myeloma. No off-target binding was observed in normal human tissues and binding was limited to occasional leukocytes in secondary lymphoid tissue. 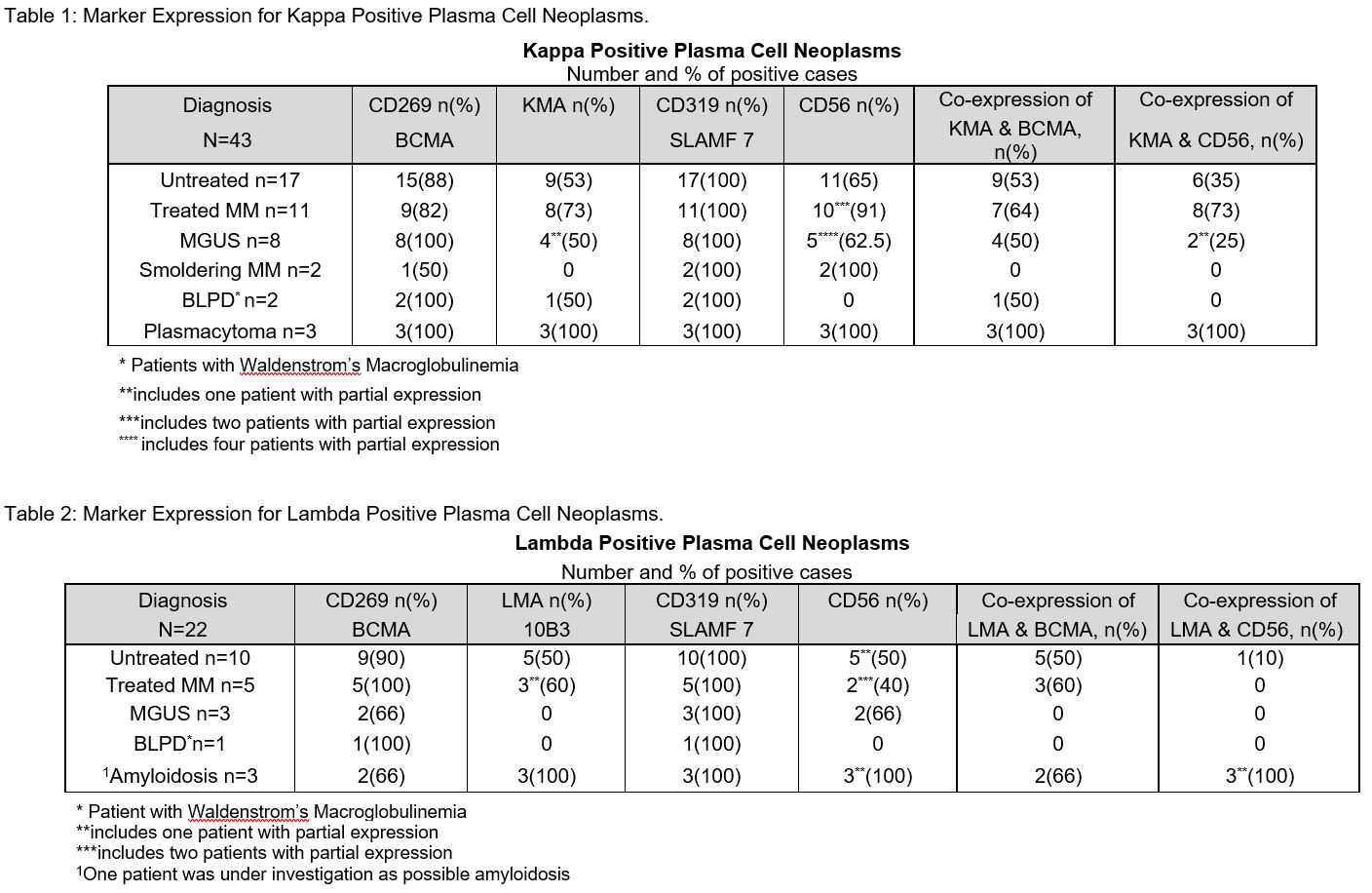