63 Enasidenib (ENA) Is Effective in Patients with IDH2 Mutated Myelodysplastic Syndrome (MDS) : The Ideal Phase 2 Study By the GFM Group

Background : ENA is a selective inhibitor of IDH2 approved in the US for the treatment of patients with relapsed/refractory IDH2 mutated AML. Little is known on its efficacy in patients with IDH2m myelodysplastic syndromes. Here we report the preliminary results of a Phase 2 study evaluating the safety and efficacy of ENA in three different cohorts of MDS : Higher risk MDS having failed HMA (cohort A, n=29), untreated higher risk MDS without life threatening cytopenias (ie ANC < 500/mm3 or any recent severe infections and/or platelets below 30,000/mm3 and any bleeding symptom, cohort B, with the addition of AZA in non-Responders after 3 cycles, n=29) and lower risk MDS having failed ESA (cohort C, n=10). (ClinicalTrials.gov NCT03744390).

Methods : Subjects enrolled in cohort A, B or C received continuous 28-day cycles of ENA - 100 mg PO QD. In cohort B, Azacitidine (75 mg/m2/d x 7 days, SC) was added to Enasidenib after 3 cycles, only in the absence of IWG 2006 response (absence of CR, PR or HI). The primary endpoint was Overall hematological response (including CR, PR,stable disease with HI according to IWG 2006). All patients who achieved CR, PR or HI were considered as responders and could continue treatment until loss of response. Secondary endpoints of the trial included safety,duration of response, EFS, Overall survival and translational project evaluating the role of biomarkers on response.We report interim results in the first 26 pts enrolled.

At data cut off, 10 pts were still on treatment. Most common reasons for discontinuing ENA were Treatment failure (7.7%), disease progression (23.1%), adverse events (7.7%) and death (3.8%). Three patients experienced a differentiation syndrome (1 in cohort A and 2 in cohort B) that resolved without sequelae. Other most common grade 3-4 AEs were nausea/diarrhea (n=4) and thrombocytopenia (n=5).

Results from the first 26 patients included in this study show that ENA has no limiting toxicity in patients with MDS and that it can provide responses in 42% of patients. These responses appear to be encouraging, especially in first-line (low and high risk) patients. An update of this study will be presented. 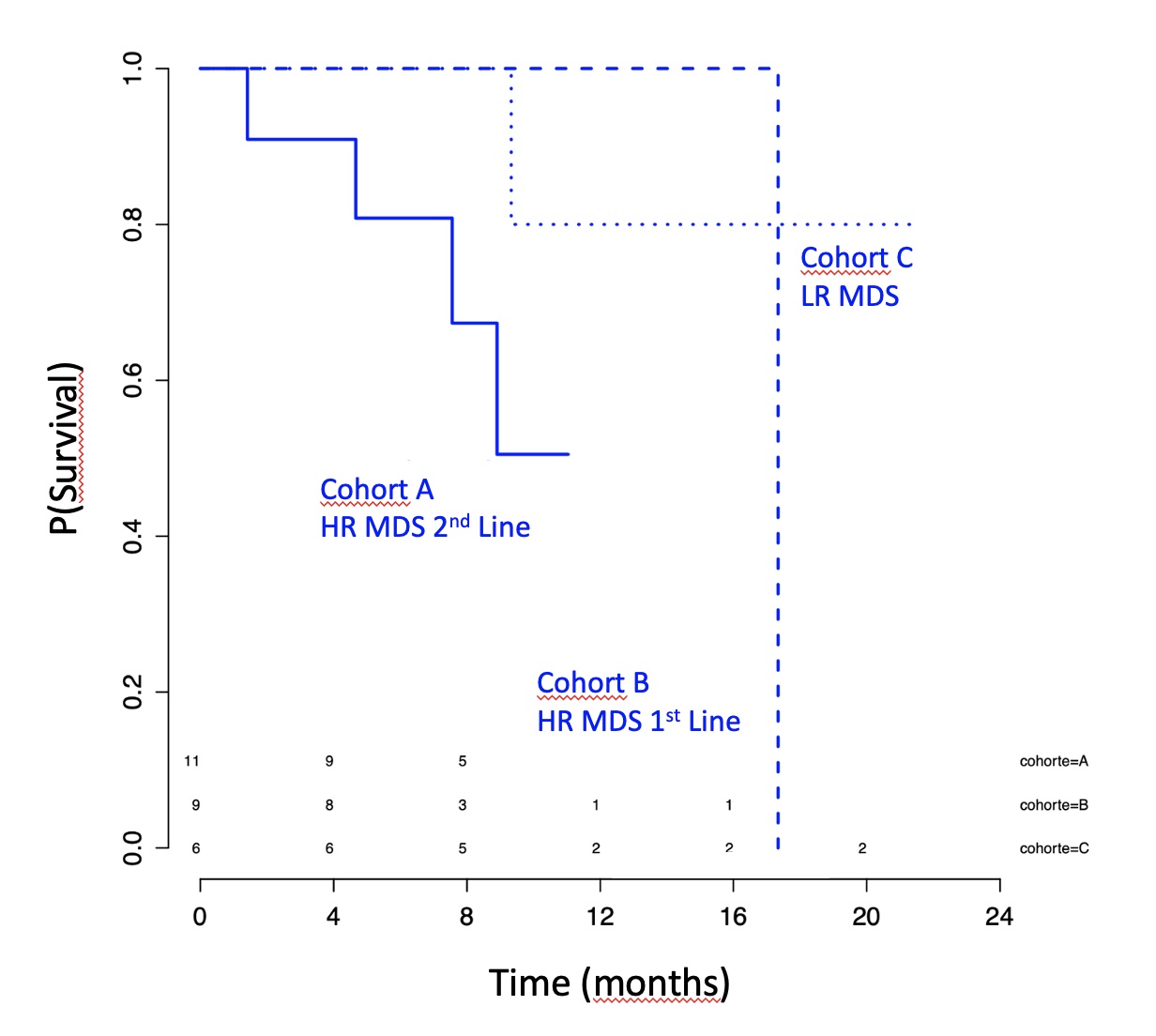 OffLabel Disclosure: enasidenib is not approved for MDS