Cold Agglutinin Disease (CAD) is an autoimmune condition resulting in hemolytic anemia; the subsequent fatigue causes a reduction in patient’s physical and mental health-related quality of life (HRQoL). Sutimlimab (formerly BIVV009) is a humanized monoclonal anti-C1s antibody with a clinical trial program to support its development as a treatment for CAD. CARDINAL (NCT03347396) and CADENZA (NCT03347422) are Phase 3 clinical trials that assessed the treatment-related change in HRQoL using the 12-item Short-Form Health Survey (version 2) (SF-12v2) in patients with CAD treated with sutimlimab. This analysis aimed to estimate the clinically important change (CIC) in SF-12v2 physical (PCS) and mental (MCS) component summary scores, using pooled data from CARDINAL and CADENZA.

CARDINAL was an open-label, single-arm, multicenter study for patients with CAD with a recent blood transfusion. CADENZA was a randomized, double-blind, placebo-controlled, multicenter study; patients with CAD (without a recent blood transfusion) were randomized 1:1 to receive sutimlimab or placebo. In both studies, patients underwent efficacy and safety assessments for 6 months (Part A). Data from the Part A 26-week component of both studies were combined for these analyses. CIC, defined as mean score change divided by SD at baseline, gave treatment effect sizes of 0.2 (small), 0.5 (moderate) or 0.8 (large), allowing for interpretation of patient-reported outcomes by pre-determining clinically meaningful improvements in physical and mental well-being. Anchor- and distribution-based analyses were performed to estimate the CIC for the following patient-reported outcome measures: Patient Global Impression of (fatigue) Severity (PGIS) and Patient Global Impression of Change (PGIC). Anchor-based approaches (mean change and model-based) examined the relationship between change in SF-12v2 PCS and MCS scores and change in related anchor variables: change in PGIS, PGIC (from baseline to Week 26) and hemoglobin levels (g/dl) (from baseline to the mean value of Weeks 23, 25 and 26). The independent variable was change in PCS and MCS scores and dependent variables were binary (improvement vs. no improvement) in model-based analyses.

Fifty-five patients with SF-12v2 data available were included from CARDINAL (n=17) and CADENZA (n=38). The median (range) age was 70 (46–88) years and 76% of patients were female (n=42). Mean (SD) PCS and MCS scores at baseline were 40.9 (7.8) and 47.3 (9.1), respectively. From baseline to Week 26, mean (SD) changes in PCS and MCS scores were 4.1 (7.1) and 3.1 (11.6), respectively. Correlations between changes in PCS and MCS scores and PGIS, hemoglobin, and self-report of change in PGIC at Week 26 ranged from 0.36 to 0.55, indicating moderate associations (Table 1). When using an anchor-based approach that evaluated mean change in PCS and MCS scores, CIC estimates ranged from 2.9 to 7.4 for PCS and 2.2 to 7.0 for MCS (Table 2). Results from the 2 model-based anchor approaches, which estimated CIC using receiver operating characteristic curves and an adjusted logistic regression-based approach ranged from 2.0 to 7.3 for PCS and 1.1 to 4.1 for MCS (Table 2). Distribution-based analyses determined the CIC to be 3.9 and 4.6 for PCS and MCS, respectively, when based on one-half of the standard deviation of baseline scores, and 3.5 (PCS) and 4.1 (MCS) when based on the standard error of measurement. The median estimate produced by all anchor-based methods were closely aligned with results of distribution-based analyses. Therefore, taking into consideration all approaches, the median CICs for CAD patients for PCS and MCS were 3.9 and 2.8, respectively.

In this analysis, patients with CAD had median CIC values of 3.9 and 2.8 for PCS and MCS, respectively. In a previous study, anchor-based analyses for the general population gave CIC scores of 3.0 for both PCS and MCS (Maruish ME et al. 3rd edition; Lincoln, RI; 2012). The results of this study converge well with those estimates observed for the general population involving thousands of observations. This analysis also demonstrated that meaningful physical and mental health benefits (including a reduction in fatigue) were associated with improvements in hemoglobin levels, a main clinical outcome measure of CAD. 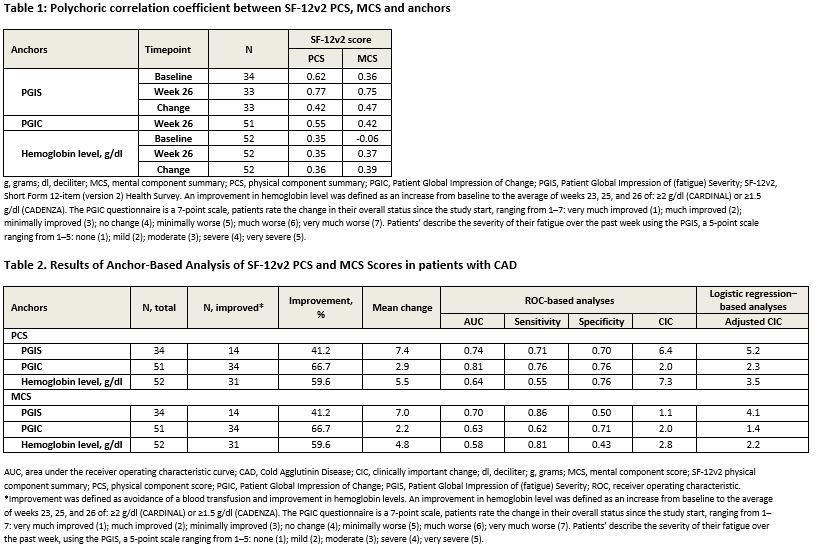