T-cell lymphoblastic lymphoma is an aggressive hematological malignancy, often presenting with bulky mediastinal masses or diffuse extramedullary disease (EMD). There is evidence that T-LBL differs in various aspects from T-cell acute lymphoblastic leukemia in addition to differences in clinical presentation of diseases. To date, there are only a few clinical case reports of CAR-T therapy for T-LBL. Here, we explored the efficacy and safety of CD7-targeted CAR-T cells (CD7CAR) for R/R T-LBL in a phase I clinical trial (NCT04916860).

Eligible R/R T-LBL patients were enrolled between November 2020 and May 2021. Peripheral blood (PB) mononuclear cells were collected from either the donor (n=1) or patients (n=7) by leukapheresis. The CD7-CAR gene was obtained by gene synthesis and then ligated into a lentiviral vector by molecular cloning. We developed second-generation CAR-T cells with an intracellular co-stimulatory domain of 4-1BB and CD3ζ targeting CD7. Intravenous fludarabine (30 mg/m2/d) and cyclophosphamide (300 mg/m2/d) were given to all patients on Day -5 to Day -3 prior to CD7CAR infusion.

Patient characteristics are summarized in Table 1. Eight R/R T-LBL patients were enrolled with a median age of 37 years (14-47 years) and a median of 5 prior lines of therapies (2-10 lines). Two patients had a history of central nervous system involvement. Two patients relapsed from a previous allogenic (N=1) or autologous (N=1) hematopoietic stem cell transplantation (HSCT). Four patients expressed high-risk genotypes including TP53, EZH2 and RUNX1. At enrollment, 7 patients had EMD relapse (diffuse involvement, N=5; bulky mediastinal masses, N=2). One patient had no EMD involvement at enrollment due to a prior palliative mediastinal radiotherapy, but relapsed with bone marrow (BM) blasts up to 87.27%. A total of 5/8 patients had BM blasts at enrollment with median BM blasts of 17%.

Following CD7CAR infusion, 5/5 patients who had prior BM blasts achieved minimal residual disease negative (MRD-) complete remission with incomplete hematologic recovery (CRi) on Day 28, among whom 3 had already achieved MRD- CRi on Day 14. The 3 patients who did not have BM blasts prior to CAR-T infusion maintained zero BM blasts post infusion. Of the 7 patients who had EMD involvements, 4 achieved EMD CR on Day 28, and 1 on Day 51. Of the 2 patients who had bulky mediastinal masses (~7 or 6 cm), 1 had partial response and 1 had stable disease on Day 28, respectively. Of all patients, 6 subsequently underwent allo-HSCT following CD7CAR-T infusion with a median time of 54 days (42-56 days), without relapse or progression. One patient with an allo-HSCT prior to CD7CAR infusion died after receiving a second haploidentical allo-HSCT due to acute graft-versus-host disease. The other 2 patients who did not receive a transplant were on Day 55 and 73 post CD7CAR infusion with ongoing remission by the cutoff date. Mild cytokine release syndrome (CRS, ≤Grade 2) was observed in 7/8 patients. Only 1/8 patient had Grade 3 CRS and Grade 1 neurotoxicity. The median onset of CRS was 1 day post infusion (0-15 days) with a median duration of 16 days (5-19 days).

Our clinical trial showed that CD7CAR-T cells derived either from the patients or the donor have a high initial efficacy and a good safety profile in R/R T-LBL patients. Initial high CR could be achieved both intramedullary and extramedullary in the majority of patients, even among those who harbored with high-risk features or had diffuse extramedullary lesions. However, patients with bulky mediastinal masses may require more than one-month time to achieve remission. Long-term observation and more patients are needed to further evaluate the safety and efficacy of CD7CAR. 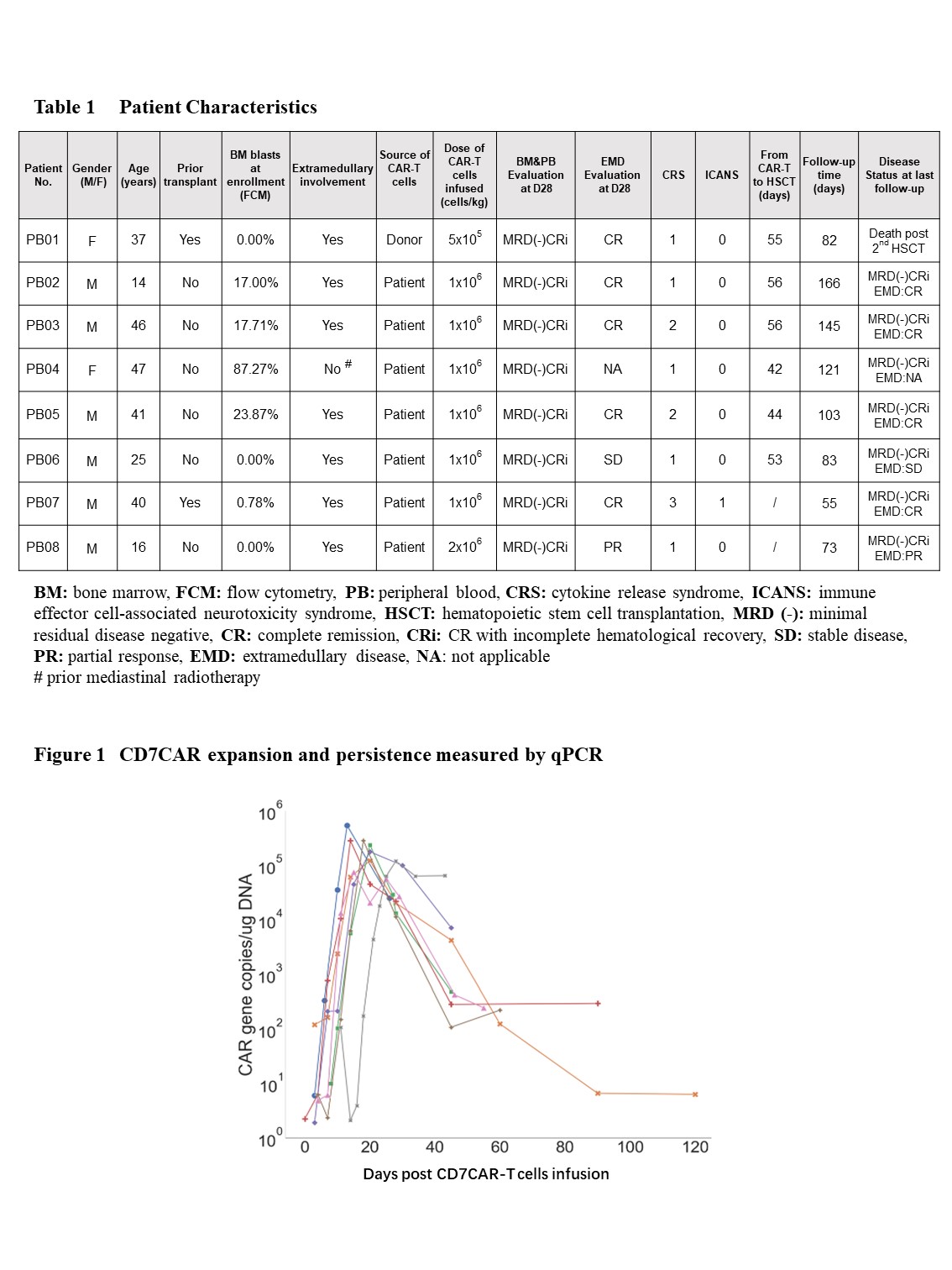