1809 Validating a Machine Learning Grading System for Acute Gvhd. a Study on Behalf of the EBMT Transplant Complications Working Party

Despite significantly improved preventive measures, acute graft-versus-host disease (aGVHD) remains as one of the most frequent complications after allogeneic hematopoietic stem cell transplantation (HCT). Its clinical grading is determined by the evaluation of its primarily affected organs, namely skin, liver and the gastro-intestinal tract. A number of existing grading systems, of which the ‘Keystone Consensus’ (Przepiorka D et al. BMT 1994) and MAGIC grading systems (Harris AC et al. BBMT 2016) are the most customary, have been proposed over the years to evaluate aGVHD severity based on the extent of aGVHD organ involvement. However, limitations remain regarding its association with clinical outcome. In the current era, particularly consensus grades I and II aGVHD are hardly distinguishable with respect to overall survival (OS). Given the discrepancies in aGVHD grading, we hypothesized that a data-driven approach would support the understanding and classification of aGVHD with respect to organ involvement, clinical outcome and risk cohorts. Here, we validated on a large, multi-national EBMT cohort a novel data-driven grading system for aGVHD that was previously developed by unsupervised learning applying principal component analysis on aGVHD organ stages (Turki AT et al. EHA 2020). The resulting Machine Learning (ML) aGVHD grading had 12 stages that were divided into 4 balanced ML-aGVHD grades to assess the severity of aGVHD, different from conventional grading.

Our study included 19,617 adult patients with first HCT for hematologic malignancies between 2009 and 2018 and evidence of aGVHD. All donors except cord blood HCT were included. Detailed aGVHD organ involvement were required for the calculation of the ML-aGVHD score. Exclusion criteria were missing information on aGVHD organ involvement or follow up and very late onset aGVHD (> d+180). The baseline characteristics of this cohort reflect current HCT practice, with acute myeloid leukemia (55.3%) as predominant disease and a majority of unrelated donor HCT recipients (63.7%). Myeloablative conditioning was used in 46.7% of patients. In addition to baseline calcineurin inhibitors, 60.6% of patients received in-vivo T cell depletion with ATG or Campath.

The ML-aGVHD grading distinguished 12 ML stages with significantly different clinical outcomes for OS (Figure 1a), non-relapse mortality (NRM) and relapse. The 4 ML-aGVHD grades (ML-I, stages 1-3; ML-II stages 4-6; ML-III, stages 7-9; ML-IV stages 10-12) revealed highly significant and clinically relevant differences for OS and NRM (p<0.0001). Utilizing the ML-aGVHD grading, 71.3% of patients were categorized ML-I, 18.3% ML-II, 7.98% ML-III and 2.38% ML-IV. The 6-month and 12-month OS probability from the diagnosis of aGVHD were 85.4% and 75.3% for ML-I, 72,7% and 61.5% for ML-II, 41.5% and 31% for ML-III and 14.8% and 9.1% for ML-IV, respectively (Figure 1b). We also analyzed the impact of covariates from the EBMT database on clinical outcome by Cox regression. All significant variables from univariate Cox regression were integrated into multivariate models for OS and NRM. Confounding factors for multivariate analysis for OS included patient age, gender, performance status, remission at HCT, HCT period, donor constellation and CMV status. The analysis confirmed the significant differences for OS as revealed by the ML-aGVHD grading system (p<0.0001), independent of these confounders. Also for NRM, the multivariate analysis confirmed the distinction as by the ML-aGVHD grading (p<0.0001). Finally, we compared the performance of the ML-aGVHD algorithm to the keystone consensus grading. Here 35.2% of patients were diagnosed with grade I aGVHD, 39.4% with grade II, 17.3 with grade III and 8.1% with grade IV aGVHD. In short, the ML-aGVHD grading system was successfully validated on an independent multi-national EBMT cohort. It integrated multi-organ aGVHD involvement different from conventional aGVHD grading by accounting for each affected organ. Our findings support the additional use of the ML-aGVHD grading system for the assessment of aGVHD severity in patients after HCT, in order to identify patients at risk for high NRM and reduced OS. 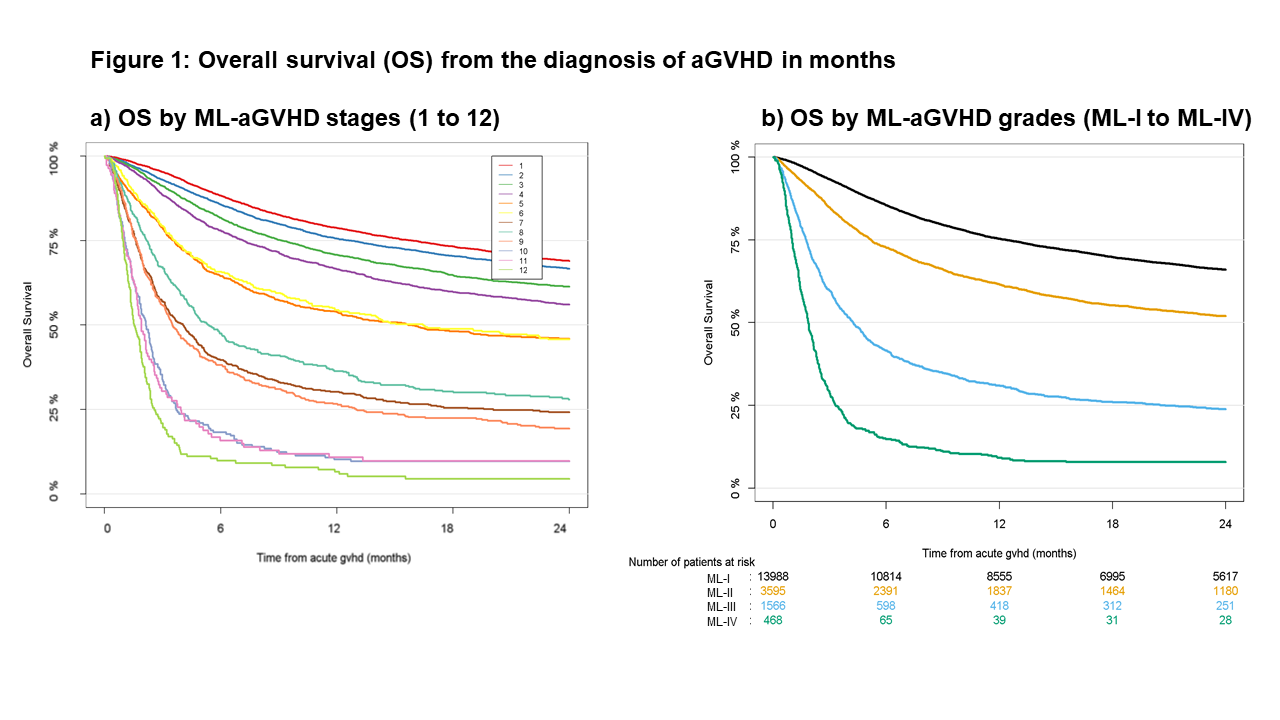