Failure to respond to steroid therapy for intestinal acute graft-versus-host disease (aGvHD) is associated with limited further therapeutic options. Fecal microbiotherapy is defined as the perfusion of treated stool from one or several healthy donors via the upper or lower gastrointestinal (GI) route aiming at improving microbial diversity and functionality. Here we report clinical outcomes from a 76-patient cohort with steroid refractory (SR) GI-aGvHD treated with the pooled allogenic fecal microbiotherapeutic MaaT013. Twenty-four patients were treated in the prospective, single-arm, phase IIa, HERACLES study (NCT03359980) while 52 patients were treated in an expanded access program (EAP).

For HERACLES, 24 patients with grade III-IV SR-GI-aGvHD were treated with MaaT013 in 26 European sites, as a 2nd line therapy after SR diagnosis and evaluable for treatment response.

GI-GvHD response was evaluated weekly and 28 days after day (D) 0 (inclusion for HERACLES or 1st dose for EAP). For all patients, GI-overall response rate (ORR) at D28 was defined as the proportion of patients achieving complete response (CR), very good partial response (VGPR) or partial response (PR), compared to D0, without the use of additional systemic therapy. Other endpoints included the best overall response (BOR) achieved at any time, and overall survival (OS).

Prepared under GMP, MaaT013 is characterized by a highly consistent richness of 455 ±3% OTUs and an Inverse Simpson index > 20. Treatment comprised 3 MaaT013 doses, each composed of 30 g of feces in 150 mL volume of inoculum (total 90 g of feces from 4 to 8 healthy donors) administered by enema (except for 2 EAP patients by nasogastric tube). All patients received at least 1 MaaT013 dose, 92% (HERACLES) and 87% (EAP) at least 2 doses, and 50% (HERACLES) and 71% (EAP) the full treatment course. In HERACLES, the reasons for not applying the 3rd dose were death (n=5), physician decision to introduce salvage therapy (n=5), and ICU hospitalization (n=2)).

In HERACLES, treatment with MaaT013 was characterized by excellent tolerance: 252 Treatment-Emergent Adverse Events (TEAE) were reported for the 24 patients, the majority being infections (79%) and GI disorders (62%), as expected in GvHD patients. Of these 252 TEAE, only 2% (5 serious events in 2 patients) could not reasonably be excluded from being related to MaaT013 by the investigators. Shotgun sequencing in these 5 TEAE revealed that the causative infectious agents could not be detected in the administered MaaT013. In EAP, the safety profile of MaaT013 was considered satisfactory for all patients.

16S microbiome analyses were performed in the HERACLES population and showed that MaaT013 produced an early increase in α-diversity at genus level with a significant increase in Richness index at all evaluated timepoints (p <0.003). At D28, R patients had higher values of α-diversity indices (Shannon p=0.005 and Richness p=0.038) compared to NR patients, and higher proportions of MaaT013-derived species in the total composition of R microbiota (p=0.043).

We herein report the treatment of 76 SR-GI-aGvHD patients using a full ecosystem, pooled-donor, high-richness biotherapeutic. The D28 GI-ORR was 38% and 60% in HERACLES and EAP respectively and this clinical benefit positively and significantly impacted OS (44% and 62% M12 in HERACLES and EAP R patients respectively). MaaT013 was shown to be safe and effective in these heavily immunocompromised patients, warranting further exploration of this approach. 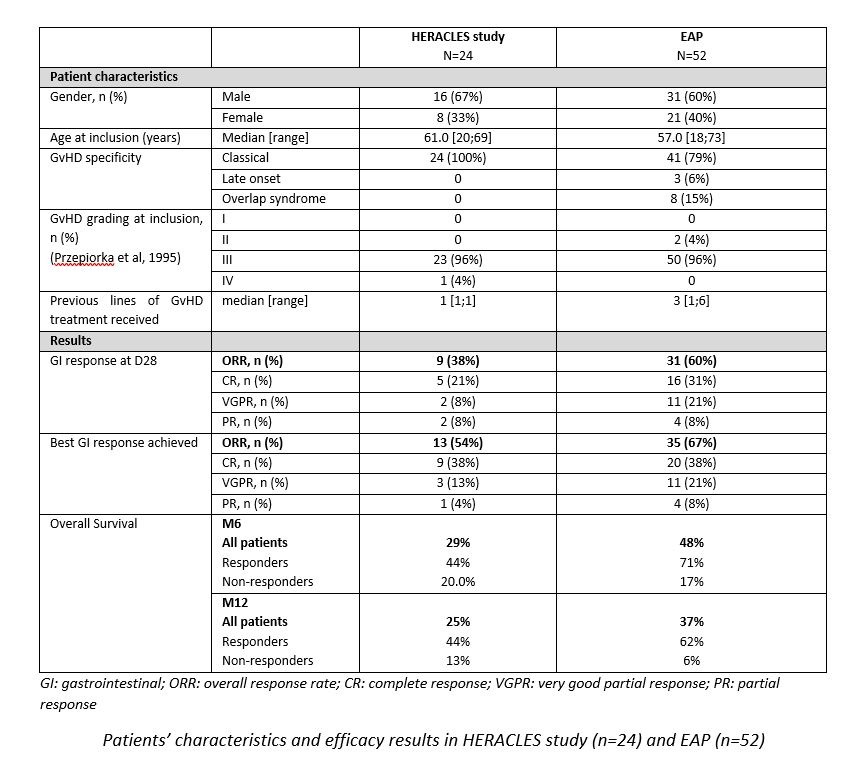 OffLabel Disclosure: Off label used of MaaT013 will be discussed during the presentation