Introduction: Sequential Hodgkin lymphoma (HL) trials of the Children’s Oncology Group (COG) have tested treatment strategies intended to reduce late toxicity while maintaining high rates of cure. However, the long latency of the relevant late effects makes it impossible to observe in a timely way the degree to which modifications to protocol-directed treatment will achieve this goal. The purpose of this study was to estimate late cardiac disease risk associated with sequential COG trial protocols using established risk models.

Results: Based on the median age of enrolled patients, results are reported for modeled age 15 years at treatment. The cumulative planned doxorubicin dose was 200mg/m2 on AHOD0031 and AHOD0831, and increased to 250mg/m2 on AHOD1331 to improve progression-free survival compared to the prior trials for select groups of higher risk patients. Doxorubicin dose was 300mg/m2 on S1826 to limit RT use to selected patients with persistent disease on positron emission tomography (PET) at the end of systemic therapy. Mediastinal RT was given to 62% of patients on AHOD0031 (mean heart dose 13.2Gy), 58% on AHOD0831 (mean heart dose 13.6Gy), and 53% on AHOD1331 (mean heart dose 10Gy). For S1826, we assumed a 5% rate of mediastinal RT use, mean heart dose of 10Gy, and no long term cardiac risk associated with nivolumab or brentuximab. For the average 15-year old patient, the predicted 30-year cumulative incidence of any cardiac disease was 8.8% in AHOD0031, 8.7% in AHOD0831, and 8.5% in AHOD1331 (Figure 1). Despite the increase in doxorubicin dose, the anticipated reduction in the utilization of mediastinal RT in S1826 is predicted to reduce the 30-year risk of cardiac disease to 7.8%. The predicted 30-year cumulative incidence of any cardiac disease, for the average 12-, 15-, and 18-year old males and females are shown in Table 1.

Conclusions: From 2002 – 2019, reductions in the proportion of patients receiving mediastinal RT and smaller target volumes with ISRT produce lower cardiac radiation dose, which is predicted to offset increase in doxorubicin dose and produce a small reduction in late cardiac disease. Limiting RT use based on end of chemotherapy PET on S1826 is predicted to further reduce late cardiac disease among children with HL risk despite higher doxorubicin dose in this protocol. Increasing use of dexrazoxane may further mitigate risk for cardiac toxicity in more contemporary cohorts. Clarification of the impact of nivolumab, brentuximab and relapse therapy would allow for a more complete prediction of cardiac disease risk. 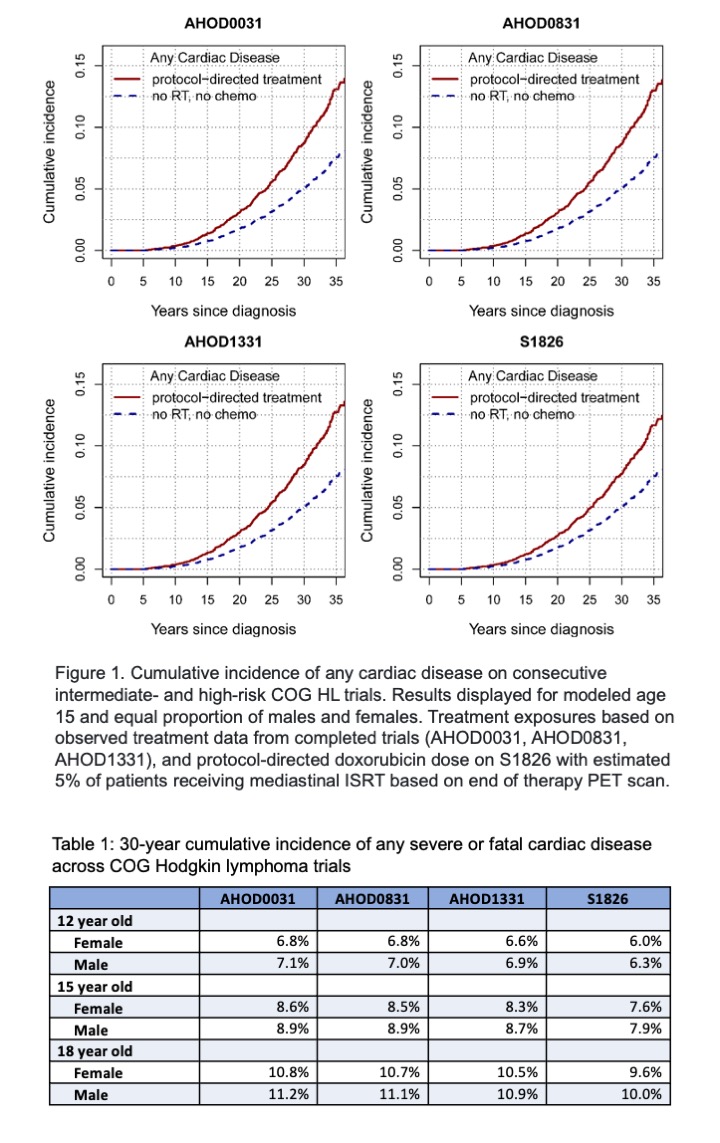