Salvage options for children with relapsed ALL remain sub-optimal, particularly for T‑cell ALL, with disease refractoriness and further relapse remaining the leading cause of death. Achieving complete remission (CR) after relapse is the first critical step to cure. Combining the proteasome inhibitor (PI) bortezomib with chemotherapy showed promising CR rates in previous studies in pediatric ALL (Messinger 2012, Horton 2019, Bertaina 2017).

Pts <21 years of age and diagnosed with first early bone marrow (BM) relapse (<36 months from diagnosis), multiply relapsed or refractory ALL, or primary induction failure were eligible; pts with T-cell ALL were eligible with any BM relapse. Twenty-four pts (13 B‑ALL and 11 T-ALL; Table 1) received VXLD at carfilzomib dose levels of 27 (n=3), 36 (n=7), 45 (n=4), and 56 (n=10) mg/m2. The primary endpoint was carfilzomib-related DLTs during induction. DLTs were defined as ≥ grade 4 (G4) neutropenia or ≥ G3 thrombocytopenia beyond day 45 of the induction cycle in pts achieving CR; most G4 nonhematologic toxicities were also counted as DLT. Efficacy endpoints included CR rate based on BM and extramedullary sites on day 29 of induction and consolidation, regardless of hematological recovery. Pharmacokinetics (PK) and pharmacodynamics (PD) carfilzomib data were secondary endpoints.

Of 16 DLT-evaluable pts, 2 DLTs were observed in the VXLD cohort among 8 DLT-evaluable pts at the 56 mg/m2 dose level (pulmonary hemorrhage on day 1 [n=1] and G4 thrombocytopenia past day 45 of induction [n=1]). G3–4 hematological AEs occurred in 54% of pts. Non‑hematological >G3 treatment emergent adverse events (TEAEs) of note are listed in Table 2. Serious TEAEs (SAEs) were reported in 58% of pts with the most common being bacteremia, acute pancreatitis, and posterior reversible encephalopathy syndrome (PRES; all n=2, 8%); both cases of PRES were considered carfilzomib related and occurred in pts given a prior allogeneic stem cell transplant. Three fatal TEAEs occurred within 30 days of the last dose, all in the 56 mg/m2 cohort (multiorganism sepsis, pneumonia-unspecified, and leukemia). Both pts who died due to toxicity had refractory relapse 9 and 6 months after a stem cell transplant, respectively. The RP2D was identified as 56mg/m2. PK assays demonstrated no significant age-related differences in area under the curve across age groups or between children and adults (Table 3). Pharmacodynamic assays indicated complete suppression of proteasome activity in peripheral blood at dose levels >27 mg/m2.

Carfilzomib in combination with VXLD chemotherapy was found to be tolerable with promising efficacy in pediatric pts with highly advanced ALL. The RP2D of carfilzomib in this combination chemotherapy regimen was identified as 56 mg/m2. Further efficacy and additional safety data are currently being investigated in phase 2 of this trial. 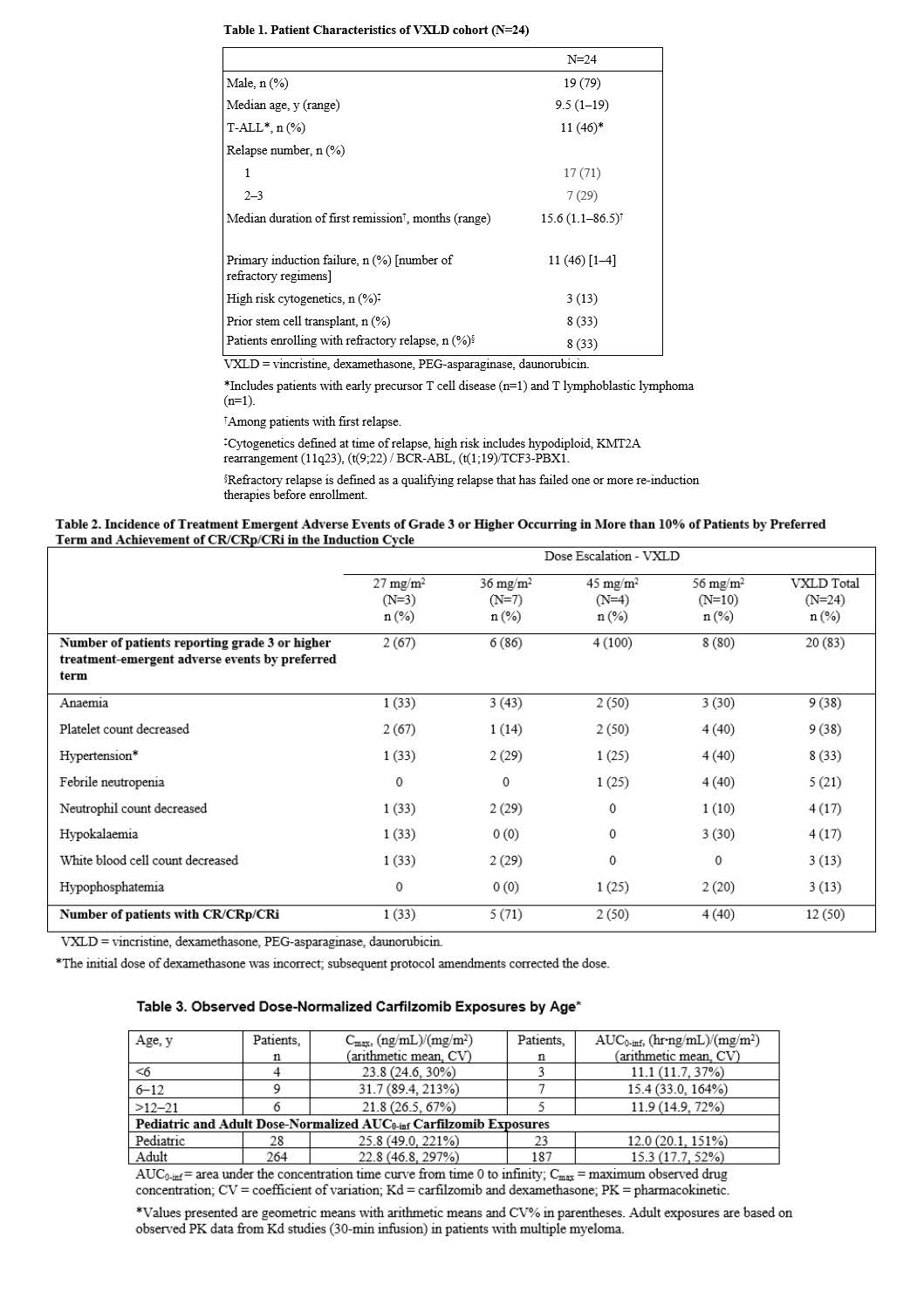 OffLabel Disclosure: Carfilzomib is approved in the United States for the treatment of adult patients with relapsed or refractory multiple myeloma. It has not been approved for use in pediatric patients with ALL.