519 Significant Improvements in Survival for Patients with t(6;9)(p23;q34)/DEK-NUP214 in Contemporary Trials with Intensification of Therapy: A Report from the Children’s Oncology Group

The occurrence of t(6;9)(p22;q34)/DEK-NUP214 is a rare subtype of pediatric AML that commonly co-occurs with FLT3-ITD mutations and is associated with poor outcomes, regardless of FLT3-ITD status. With increased recognition of the inferior prognostic impact of FLT3-ITD and to a lesser degree t(6;9), and with early identification of these lesions, these patients have been allocated to high risk intensive therapy on more contemporary clinical trials. Therefore we sought to interrogate the outcome of children with t(6;9) AML to determine if intensification of therapy, specifically the use of hematopoietic stem cell transplant (HSCT) in CR1, and FLT3 inhibitors for ITD+ patients, may have improved outcomes for this high risk group of patients.

We show that over the past 3 decades, outcomes of patients with t(6;9) AML have improved significantly on upfront trials. While general improvements in AML treatment and supportive care are an important aspect, our data with excellent EFS on AAML1031 suggest that the intensification of upfront therapy with HSCT, which occurred for many t(6;9) patients due to their co-occurrence with FLT3-ITD, was critical to these improvements. On the current COG phase III AAML1831 trial, all patients with t(6;9) regardless of ITD status are considered high risk and allocated to HSCT in CR1, while those with a FLT3 mutation also receive gilteritinib. Evaluation of the outcome of t(6;9) patients with this therapy will be important as while FLT3-ITD patients have been an example of a group whose poor outcomes have been shown to be abrogated with intensified therapy, it appears that t(6;9) patients may have benefitted from their co-occurrence pattern and are also a group whose outcomes can be significantly improved with an intensified upfront therapeutic approach. 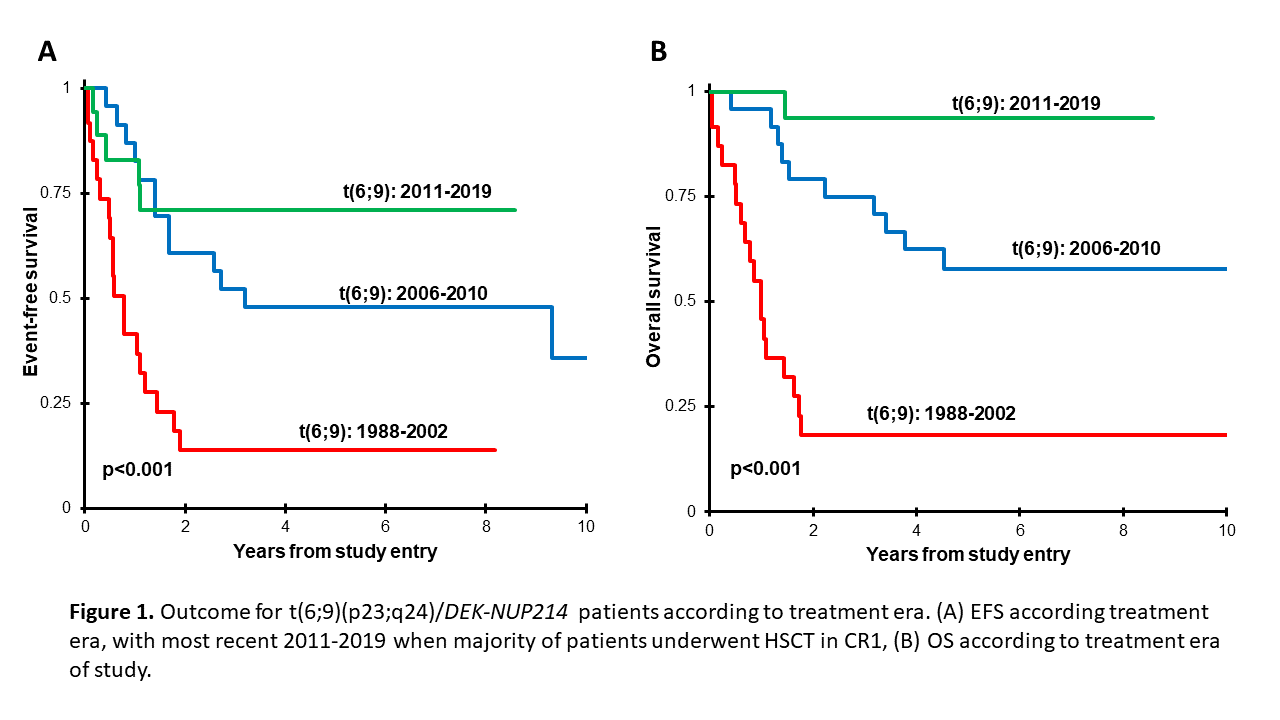