Background: Event-free survival at 24 months (EFS24) is an important clinical endpoint in newly diagnosed diffuse large B-cell lymphoma and follicular lymphoma, and patients who achieve EFS24 with frontline immunochemotherapy have minimal loss of lifetime compared to age- and sex-matched general population. However, the prognostic role of EFS24 in mantle cell lymphoma (MCL) has not been well studied, possibly due to the perception of continued relapse pattern and poor survival outcome of MCL historically. A recent study from our group demonstrated evolving frontline therapy pattern from 2002-2009 (“Era 1”) to 2010-2015 (“Era 2”) which was associated with improved EFS and overall survival (OS) in Era 2. In the current study, we sought to explore the prognostic role of EFS24 in the two eras.

Methods: Patients with newly diagnosed MCL from 9/2002 through 6/2015 were identified from Molecular Epidemiology Resource (MER), a prospective cohort study of the University of Iowa/Mayo Clinic Lymphoma SPORE. OS was defined as time from diagnosis (or the EFS24 defining event where applicable) to death from any cause and was analyzed using the Kaplan-Meier method. Expected OS accounting for age and sex was generated in R by using the general US population as the reference group. Observed versus expected OS was summarized by using standardized mortality ratio (SMR) and 95% confidence intervals (CI) of observed to expected deaths. Cumulative incidence of lymphoma-specific death was analyzed using Gray’s test, with deaths from all other causes treated as competing events.

Conclusions: MCL survival outcome has improved for patients first diagnosed in the more recent era (2010-2015, compared to 2002-2009), likely due to improved frontline therapy as well as better salvage treatments (such as lenalidomide and BTK inhibitors). In the more recent treatment era, patients who achieved EFS24 had survival approaching the age- and sex-matched general population. In addition, these patients had a low risk of dying from lymphoma and were more likely to die from other causes. Longer follow-up (e.g., in Era 2) and external validation in other series are necessary to confirm the prognostic role of EFS24. With more efficacious salvage treatment options and likely continued improvement of OS in MCL, EFS24 may become an important clinical endpoint in frontline therapy of MCL. 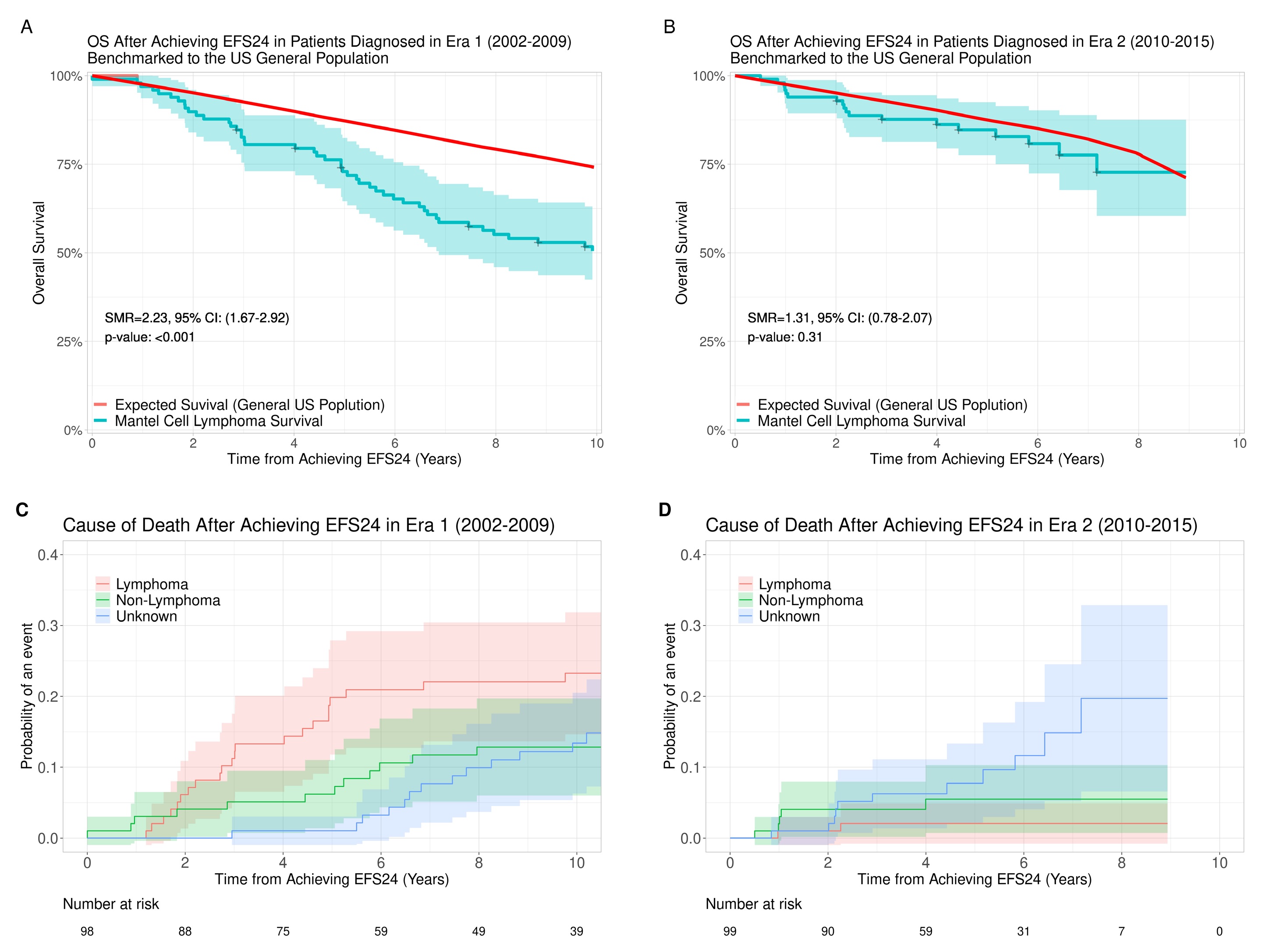