Life expectancy of CML pts optimally responding to tyrosine kinase inhibitors (TKI) is close to that of the general population and recently, TFR has been acknowledged as a new goal of CML management. TKI discontinuation in the view of TFR requires the achievement of deep and long-lasting molecular responses (MR). The gold standard BCR-ABL mRNA quantification technology and MR definitions rely on internationally standardized (IS) RT-qPCR but atypical transcripts located outside the Major-BCR region, harbored by 1-2% of pts, cannot be expressed on the IS scale. Thus, most trials and clinical practice recommendations prevent such pts from attempting TFR. The Fi-LMC group retrospectively collected real-life observations to assess TFR likelihood in this rare population.

Data from CML pts with precise characterization of atypical transcripts in whom any line TKI was stopped for any reason but after at least 2 years of undetectable molecular residual disease (UMRD) by individualized non-standardized RT-qPCR were collected. RT-qPCR sensitivity varied depending on transcript type and local molecular biology laboratory. TFS was estimated by the Kaplan-Meier method. Relapse was analyzed using the cumulative incidence function, relapse being as UMRD loss at any time and any level during follow-up (FU).

Our series comprised 16 adult CP CML pts with atypical BCR-ABL fusions including 12 males (75%). Median age at CML diagnosis was 56 years (range: 21-75) and that at TKI discontinuation was 67 years [range: 29-82]. Sokal score was low, intermediate and high in 7, 8 and 1 pts, respectively. ELTS score was low and intermediate in 10 and 4 pts, respectively and unknown in 2. Most pts expressed e19a2 (n=6) followed by e6a2 (n=4), b3a3 (n=3), b2a3 (n=2) and e8a2 (n=1). Seven pts discontinued imatinib, 4 stopped dasatinib, 4 nilotinib and 1 bosutinib. Number of lines of therapy was 2 in 8 pts, 1 in 5 pts and 3 in 3 pts. Median TKI treatment duration before discontinuation was 64 months (range: 31-218) and median duration of UMRD was 41 months (range: 21-168). The median FU after TKI discontinuation was 68 months (range: 3-149). Five pts experienced relapse leading to TKI resumption. Four relapses occurred within 3-6 months and included 2 loss of hematologic response in CP, 1 loss of hematologic response in accelerated phase CML and 1 molecular recurrence with BCR-ABL transcripts up to 1.5%. One relapse occurred at 49 months and consisted in loss of a complete cytogenetic response. These 5 pts resumed TKI and regained UMRD within 6 months, including 1 pt who died in UMRD from non-CML-related cause at the age of 82 years and 1 pt who rapidly failed a 2nd TKI discontinuation attempt.

In 1 additional pt, BCR-ABL transcripts became detectable intermittently with maximum transcript level of 0.15% and TKI was not resumed. The median FU of pts who remained treatment-free was 68 months (range: 8-149).

Our observational study of TKI discontinuation in CML pts with atypical BCR-ABL transcripts is the largest reported so far. While effort must be made for proper assessment of deep MR, preliminary results suggest that TFS pattern might favorably compare with that obtained in pts with Major-type BCR-ABL transcripts. However, relapses may be more aggressive and caution is required in order to avoid loss of hematologic responses and progression. Whether the type of atypical fusion gene influences TKI discontinuation outcome, as well as other potential prognostic factors, need to be determined in a larger series. 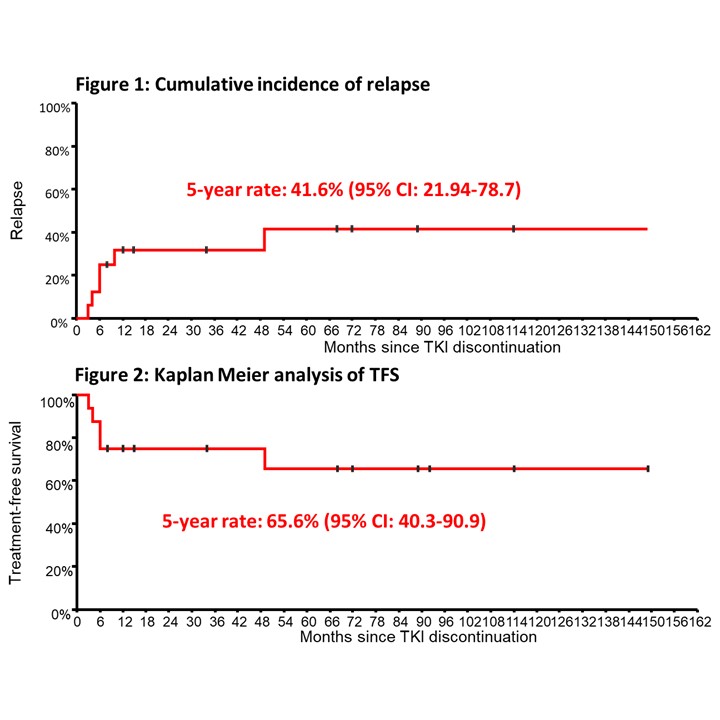