Multiple myeloma (MM) is an incurable malignancy of mature plasma cells. Despite major advances in the therapeutic armamentarium of MM, only 50% of patients survive more than 5 years after diagnosis, with significantly lower rates (21%) for high-risk patients.

We unbiasedly mapped the cell surface proteome of MM by integrating Mass-Spectrometry (MS) and RNA-seq analyses from 7 MM cell lines and 904 primary MM patient samples bearing high-risk cytogenetics. To identify cell surface proteins, we ran a pool of 4,761 proteins and 16,000+ transcripts through five repositories. An integrated scoring database was developed by scoring each ID based on the number of databases (0-5) it was identified in, with 0 if the molecule was not found in any and 5 if the protein was found in all five.

We identified 402 proteins with a surface score of 3 or higher in MM cell lines and patient samples by transcriptomics and proteomics. We prioritized the 326 candidates that were more highly expressed in patients. Based on functional enrichment analyses, we found the proteins formed three main networks with immune mechanisms representing the largest cluster (227 out of 326 cell surface proteins) followed by transporters and adhesion proteins.Based on a pipeline we previously established (1), we further selected 97 candidates minimally expressed in normal tissues. This list included current therapeutic targets such as BCMA, SLAMF7, ITGB7 and LY9. Validation in primary patient samples by western blot and flow-cytometric analyses, enabled the identification of 10 top candidates (CCR1, CD320, FCRL3, IL12RB1, ITGA4, LAX1, LILRB4, LRRC8D, SEMA4A, SLAMF6) that resulted most frequently and highly expressed. We found that LAX1, LILRB4 and SEMA4A significantly impact myeloma patient overall survival based on Kaplan-Meier analysis in the MM Research Foundation (MMRF) cohort (2). CCR1, IL12RB1, LILRB4 and SEMA4A were upregulated by the treatment with Bortezomib or Venetoclax that conversely, decreased BCMA expression in MM U266 cells. By stratifying the patient population, we found that the SEMA4A and LAX1 were up-regulated in patients with t(4;14) compared to patients with no cytogenetic abnormality; LILRB4 in patients with t(14;16) and CCR1 patients with t(14;16) and t(14;20). By calculating co-expression levels CCR1-LILRB4 and CCR1-FCRL3 resulted co-expressed in 100% of patients. For safety purposes (3), we excluded candidates with high (>55%) protein abundance in highly-purified normal hematopoietic stem cells and activated T-cells, narrowing down the list to 6 top candidates (CCR1, FCRL3, IL12RB1, LILRB4, LRRC8D, SEMA4A).

To define the function of this group of promising cell surface targets, we used a CRISPR/Cas9 inducible system in KMS11 MM cells. We found that knock-out of CCR1, LRRC8D and SEMA4A individually reduces the MM cell growth by ~60%, 50% and 50% respectively, and almost completely abrogates MM cell migration through porous chambers by >80%. By co-culturing irradiated KO and control MM cells with healthy donor T-cells we also found that lack of CCR1 increased T-cell proliferation by 50% compared to controls and enhanced killing of MM cells, suggesting that CCR1 may suppress T-cell mediated immune responses in addition to play a role in MM cell survival and migration.

This study suggests the contribution of an altered MM surfaceome to disease development and may lead to potential novel immunotherapeutic approaches for high-risk MM. 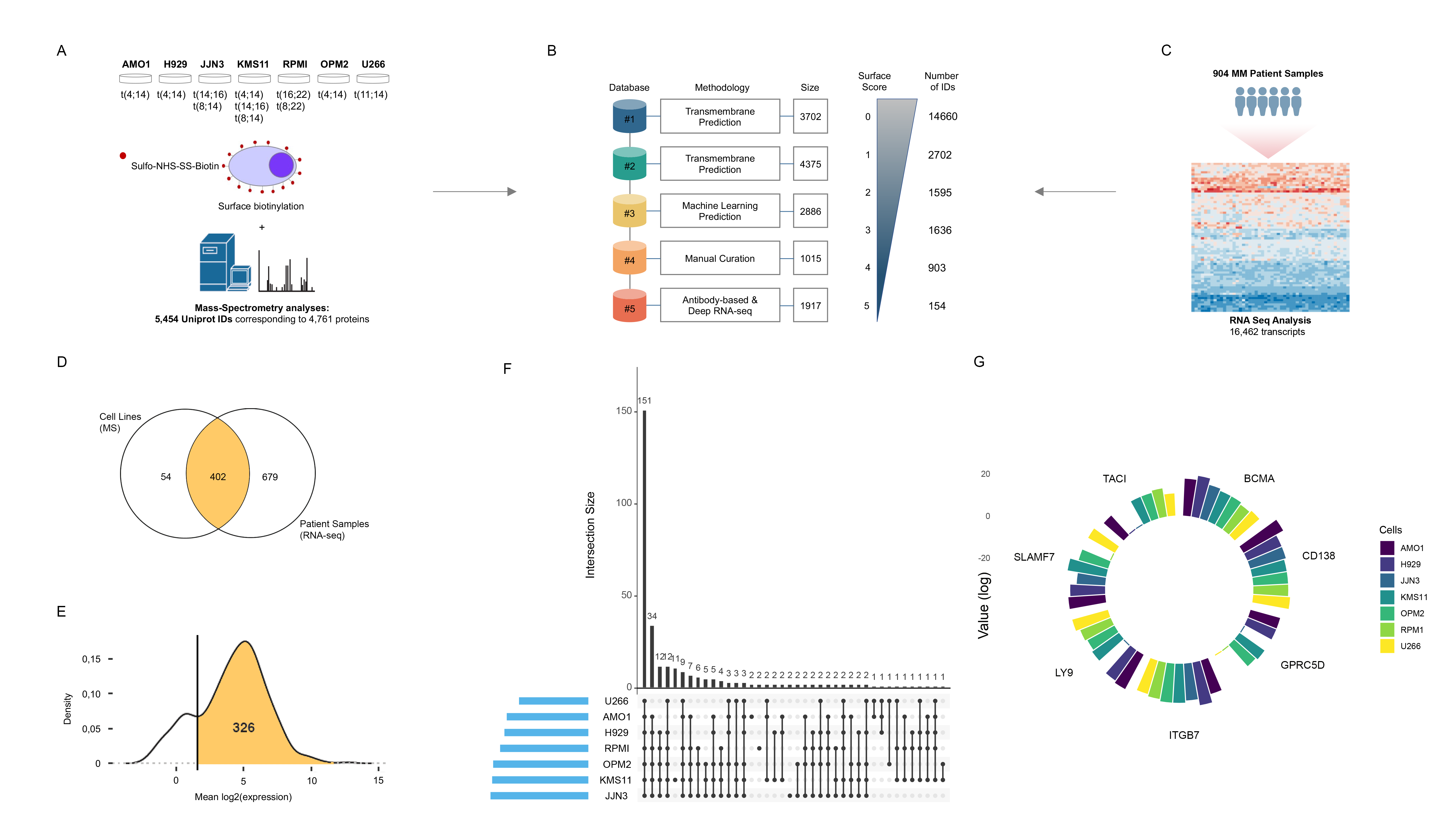