We retrospectively analyzed data from 26 patients with B-cell or plasma cell malignancies treated at 9 institutions with anakinra for CRS and/or ICANS after CAR T-cell therapy. Details regarding CAR T-cell product and disease type are shown in the Table. CRS/ICANS grade was determined by applying the ASTCT criteria at the time of peak symptom severity. We defined response to anakinra as an improvement in CRS and/or ICANS symptoms per the attending physician’s evaluation.

Patients, disease, and CAR T-cell product are shown in the Table. Anakinra was administered at 100-200mg/day subcutaneously (SC) in 13 patients (pts) (50%; low-dose), or at 8mg/kg/day SC or intravenously (IV) in 13 pts (50%; high-dose). Most pts were treated with anakinra for steroid-refractory ICANS (n=23); two pts were treated for tocilizumab-refractory CRS (n=2) and one for both (n=1). All but one patient received anakinra concurrently with corticosteroids.

The only infectious event reported after anakinra initiation was HHV6 encephalitis (n=1). Two pts with infections confirmed prior to anakinra initiation died after anakinra treatment: CMV pneumonia (n=1), Escherichia coli bacteremia (n=1). In one patient the anakinra administration route was changed from SC to IV due to a subcutaneous hematoma; in one patient anakinra was discontinued due to elevated liver enzymes. We observed anti-tumor responses (partial or complete) to CAR T-cell therapy in 15 pts (58%; B-ALL, n=1/1; DLBCL, n=9/15; MCL, n=3/4; MM; n=1/1; PMBCL, n=1/3), including complete responses in 11 pts (42%). In high-dose anakinra pts, the ORR was 77% (complete response, 53%).

In addition, a shorter time to anakinra initiation from CRS or ICANS onset was associated with CRS/ICANS improvement (median, 2 versus 5 days in responders versus non-responders, respectively; p=0.04).

After failure of tocilizumab and/or corticosteroids, early administration of high-dose anakinra (8mg/kg/day IV or SC) was associated with rapid resolution of CRS/ICANS symptoms after use of tocilizumab and/or corticosteroids, with a manageable toxicity profile, and with a non-relapse mortality rate at day 30 of 0%. In contrast, 38% of patients treated with low-dose anakinra died from infections. We observed complete responses to CAR T-cell therapy in pts treated with high-dose anakinra, suggesting limited impact on in vivo CAR-T cell function. In summary, high-dose anakinra is a feasible and promising approach after failure of conventional CRS and ICANS-directed therapies. Prospective trials of anakinra to prevent or treat CRS and ICANS are ongoing. 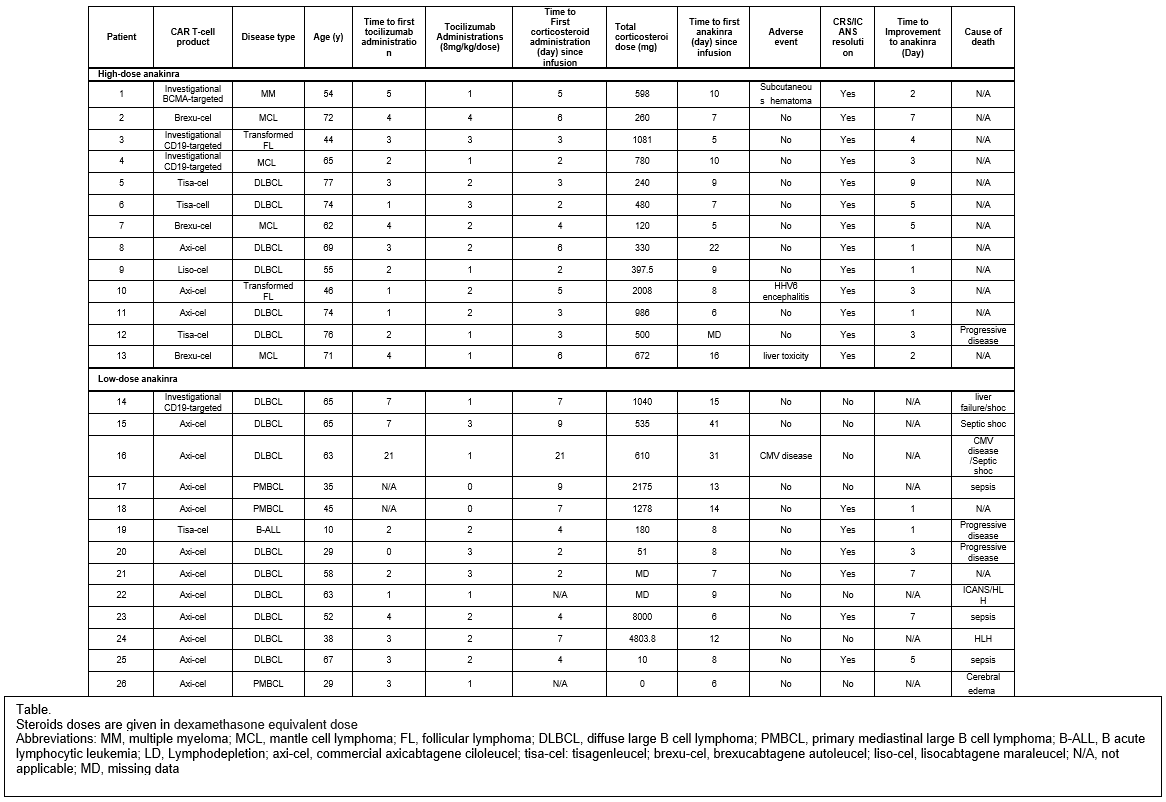