Pts with aggressive B-cell lymphoma treated with anti-CD19 CART between 2015 and 2020 across 12 US academic medical centers were included. Demographic and clinical characteristics were collected along with CART toxicities and response. Regimens administered as salvage post CART were assessed. Univariate analyses (UVA) were performed to determine impact of demographic and clinical variables on survival outcomes. All p-values were two-tailed. Survival curves were calculated using the Kaplan-Meier method.

A total of 400 pts received anti-CD19 CARTs and were included for analysis. For the entire cohort: median PFS and OS from time of CART infusion were 11 months [mo] and 27 mo respectively. On log-rank testing, pts who received ≥3 lines of pre-CART therapy and those with refractory disease pre-CART had significantly worse PFS (p=0.004 & 0.001) and OS (both p<0.001).

For pts with PD after CART: 125 (65.5%) received further therapies. Pts were more likely to receive salvage therapies if their best response to CART was CR (p=0.026) or PR (p=0.015). Response rates of select first- and second-line therapies and PFS of first line therapies received after CART failure are detailed in figure 1. ORR and CRs were highest for polatuzumab, bendamustine, & rituximab (pola-BR; 73% & 40%), followed by BTK inhibitors (BTKi; 50% & 38%), and bispecific antibodies (bsAb) (50% & 25%). Five of 7 pts who received a BTKi had non-germinal center (GC) cell of origin (COO; 1 unknown COO).

This is the largest reported analysis to date of pts with aggressive B-cell lymphoma who develop PD post-CART. The highest ORRs were with pola-BR, bsAb, and BTKi as first line of salvage. High response rates with BTKi may be attributed to non-GC COO in the majority of treated pts and perhaps a beneficial immunomodulatory effect on previously administered CARTs. AlloHCT remains a potential curative therapy for select pts with over half with durable remission; however, few ultimately received alloHCT. Despite increased use of novel therapies, survival in pts who progress after CART is still dismal warranting more effective therapies. 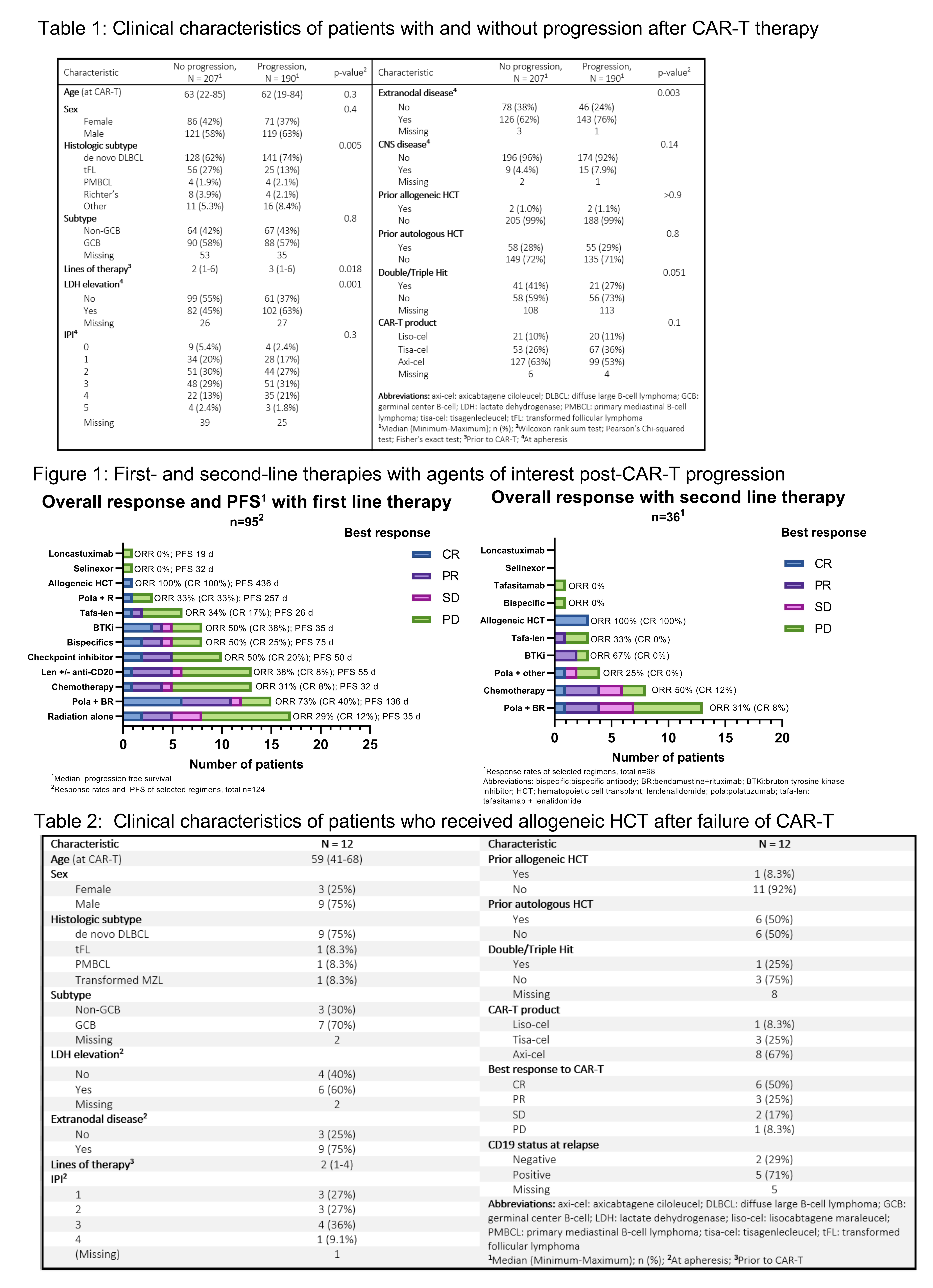