Fitusiran is an investigational, subcutaneous (SC), prophylactically administered small interfering RNA (siRNA) therapeutic. It targets antithrombin and restores thrombin generation sufficient to rebalance hemostasis in people with hemophilia A or B, with or without inhibitors. Long-term exposure to fitusiran is being studied in a Phase 1/2, 6-year open-label extension study (NCT02554773) in patients with hemophilia (PwH) A or B with or without inhibitors. Improvement in the health-related quality of life (HRQoL) as measured by Haemophilia Quality of Life Questionnaire for Adults (Haem-A-QoL) total score, and specifically in the physical health domain was previously reported by von Mackensen et al. for PwHA with inhibitors (NCT02554773, N=17, von Mackensen et al. Blood 2020;136(1):23–24). This analysis aimed to present HRQoL changes from baseline to last available measure (LAM), as measured by the Haem-A-QoL total score and domains (filtered by actual treatment exposure following 2 voluntary dosing holds) in PwHA, with or without inhibitors, who continued into the Phase 2 open-label extension study.

Participants who completed the Phase 1 study (NCT02035605) were eligible to participate in Phase 2 long-term exposure study (NCT02554773). All participants received fixed monthly doses of 50 mg (N=9) or 80 mg (N=18) of fitusiran. HRQoL data were collected in 3-month lapse periods. Mean changes from baseline to LAM were calculated for the Haem-A-QoL (total score and domains).

As of February 2021, 26 severe and 1 moderate PwHA (13 with, 14 without inhibitors) with mean baseline age (SD) 37.3 (9.7) were treated for up to mean (SD) 33.32 (17.06) months. For the total Haem-A-QoL score and each of 10 domains, mean improvements from baseline to LAM (lower scores denoting better HRQoL) were consistently observed in PwHA (except for the sport & leisure domain that was higher in the non-inhibitor group). Mean estimated reductions (SD) in the Haem-A-QoL total score were -8.33 (13.84) and -9.16 (14.55) while that in the physical health domain score were -13.21 (25.07) and -7.14 (22.80), for PwHA with and without inhibitors respectively (Table 1). When comparing Haem-A-QoL domains in inhibitor to non-inhibitor participants, results suggest a modest favorable trend for non-inhibitor patients (greater reductions in 4 vs 6 domains, respectively).

Mean improvements in the Haem-A-QoL total scores and 9 out of 10 domains suggest sustained HRQoL improvements in PwHA. Small sample size and outlying results might limit the interpretation. Further research in HRQoL for fitusiran will include a larger population on the new 50 mg every other month dose regimen, and notably Phase III results from NCT03549871 (open-label study in patients switching to fitusiran from previous prophylaxis or bypassing agents) and NCT03754790 (open-label, long-term safety and efficacy study of fitusiran) in various subpopulations. 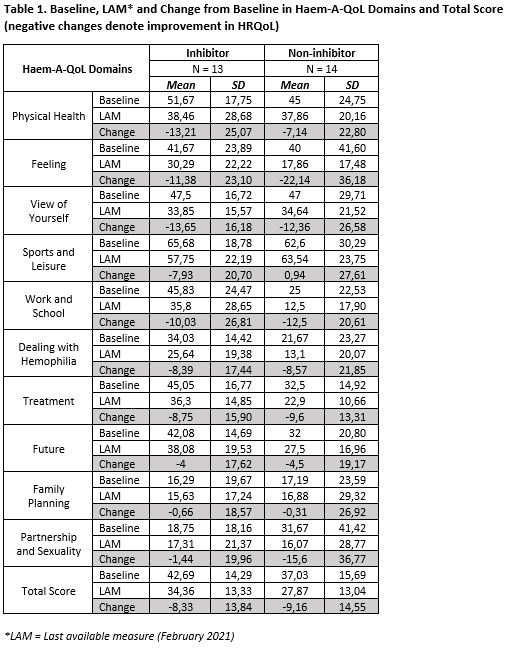