Background: The Canadian Hemophilia Bleeding Disorders Registry (CBDR) is a clinical database including data from all Canadian Hemophilia Treatment Centers (HTCs) to assist in the management of hemophilia and other bleeding disorders. The CBDR launched on July 1, 2015 and integrates the data entry platform for patients, myCBDR, allowing direct entry of treatments, bleeding events, and other patient reported outcomes (PRO) data. Health Canada approved emicizumab in August 2018 for the treatment of persons with hemophilia A (PwHA) with factor (F)VIII inhibitors, and for PwHA without FVIII inhibitors in 2019, enabling some patients without FVIII inhibitors to be provided compassionate access beginning November 2019.

Our aim for this analysis was to use the CBDR data to describe the demographics of the emicizumab-treated PwHA population and assess its effectiveness, safety, treatment patterns, and the impact on disease burden.

Methods: De-identified data were extracted from the CBDR database for all registered PwHA who had received emicizumab at least once up to December 31, 2020. Disease severity is defined by the level of endogenous clotting FVIII activity. Effectiveness outcomes include number of patients (%) with zero treated bleeds, joint bleeds, and spontaneous bleeds; annualized bleeding rates (ABR) for any bleeds and treated bleeds; Hemophilia Joint Health Score (HJHS); Patient Reported Outcomes Burdens and Experiences (PROBE); and EQ-5D-5L index and visual analog scale (VAS). ABRs were calculated as (total number of bleeds/duration of follow-up [days])*365.25. All analyses were performed based on the observed values, without imputation. This study was approved by the research ethics board of McMaster University and other participating centers, and abides by the guiding principles of the Declaration of Helsinki.

Results: 73 PwHA who received emicizumab at least once up to December 31, 2020 were identified. Demographic characteristics, severity, inhibitor status, and treatments are described in Table 1. Median (IQR) age for the entire cohort was 19.7 (10.0, 40.6) years with 45.2% ≤18 years. There were 64 PwHA with severe disease, 7 with moderate disease and 2 with mild disease; both cases with mild disease had current FVIII inhibitors. 49 PwHA had current FVIII inhibitors, 12 had a history of FVIII inhibitors, and 12 had no FVIII inhibitors. 5/73 (6.8%) received immune tolerance induction (ITI) treatment while on emicizumab. Two cases of rash (allergic or acute reactions) were reported (2/73, 2.7%) of which one (reported 6 days after administration) was possibly related to emicizumab according to the reporting HTC. No thromboembolisms or thrombotic microangiopathies were observed.

Conclusions: The Canadian population treated with emicizumab had severe disease and current or historical FVIII inhibitors. The bleed outcomes are consistent with earlier publications, showing 80.8% had no recorded bleeds. The CBDR will allow for longitudinal follow-up of this patient population. Our results can inform healthcare practitioners and regulatory authorities on the real-world safety and effectiveness outcomes of emicizumab in PwHA with and without FVIII inhibitors. 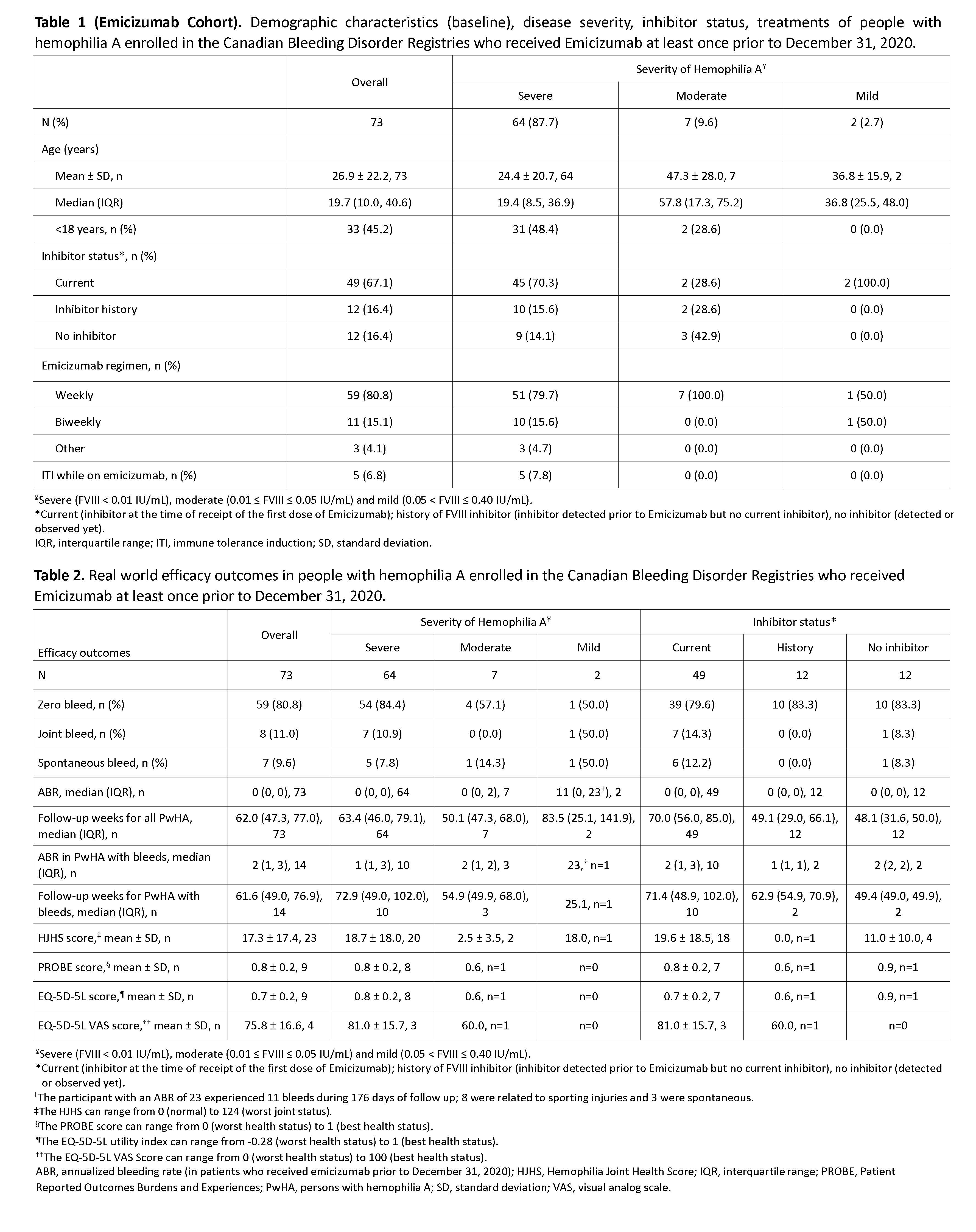 See more of: 322. Disorders of Coagulation or Fibrinolysis: Clinical and Epidemiological: Safety and Efficacy of Non-Factor Therapy in Hemophilia
See more of: Oral and Poster Abstracts
<< Previous Abstract | Next Abstract >>
*signifies non-member of ASH