Introduction: Daratumumab in combination with bortezomib and dexamethasone (DVd) demonstrated a superior overall response rates (ORR) and progression free survival (PFS) compared to Vd in the CASTOR phase 3 trial for patients with RRMM. On this basis, DVd was recommended in March 2019 for UK patients with RRMM that had 1 prior line (PL). Discrepancies in outcomes between patients treated in clinical trials compared to routine practice is well recognised due to a combination of patient, disease and treatment-related factors. In addition, bortezomib is often administered once-weekly in routine practice to minimise neuropathy, while CASTOR used bi-weekly bortezomib dosing. As a result, the real-world outcomes of patients treated with DVd are yet to be determined.

The primary aims of this analysis was to assess the ORR and PFS for patients with RRMM with 1PL treated with DVd in routine practice. Secondary aims were to assess OS, time to next treatment (TTNT), and efficacy in different sub-groups (high risk cytogenetics, previous proteasome inhibitor (PI) exposure, refractoriness of prior therapies, bi-weekly vs weekly bortezomib schedule, and previous treatment free interval (TFI)).

Methods: This was a retrospective analysis from 14 centres (academic and community hospitals; 7 within the West Midlands Research Consortium (WMRC)) treated with DVd between March 2019 and June 2021. Patients received daratumumab (IV and then SC from June 2020) weekly in cycles 1-3, on day 1 of a 3-week cycle during cycles 4-8, and then monthly from cycle 9 to progression. SC Bortezomib was predominantly given weekly for cycles 1-8 although 5 centres used bi-weekly dosing for selected patients with aggressive disease. Adverse events were graded as per CTCAE criteria.

DVd was generally well tolerated with 6% stopping due to adverse events (CASTOR 9.5%). Grade 3 or 4 toxicity occurred in 62 (22%) most commonly neutropenia and thrombocytopenia, with any grade infusion reactions reported in 27 (9%).

Conclusions: These real-world data of DVd at 1st relapse demonstrated good tolerability and high response rates with a weekly bortezomib schedule despite a more heterogenous population. However, high risk patients by cytogenetics, ISS or EMD had inferior outcomes as did those treated within 12 months from first line treatment. 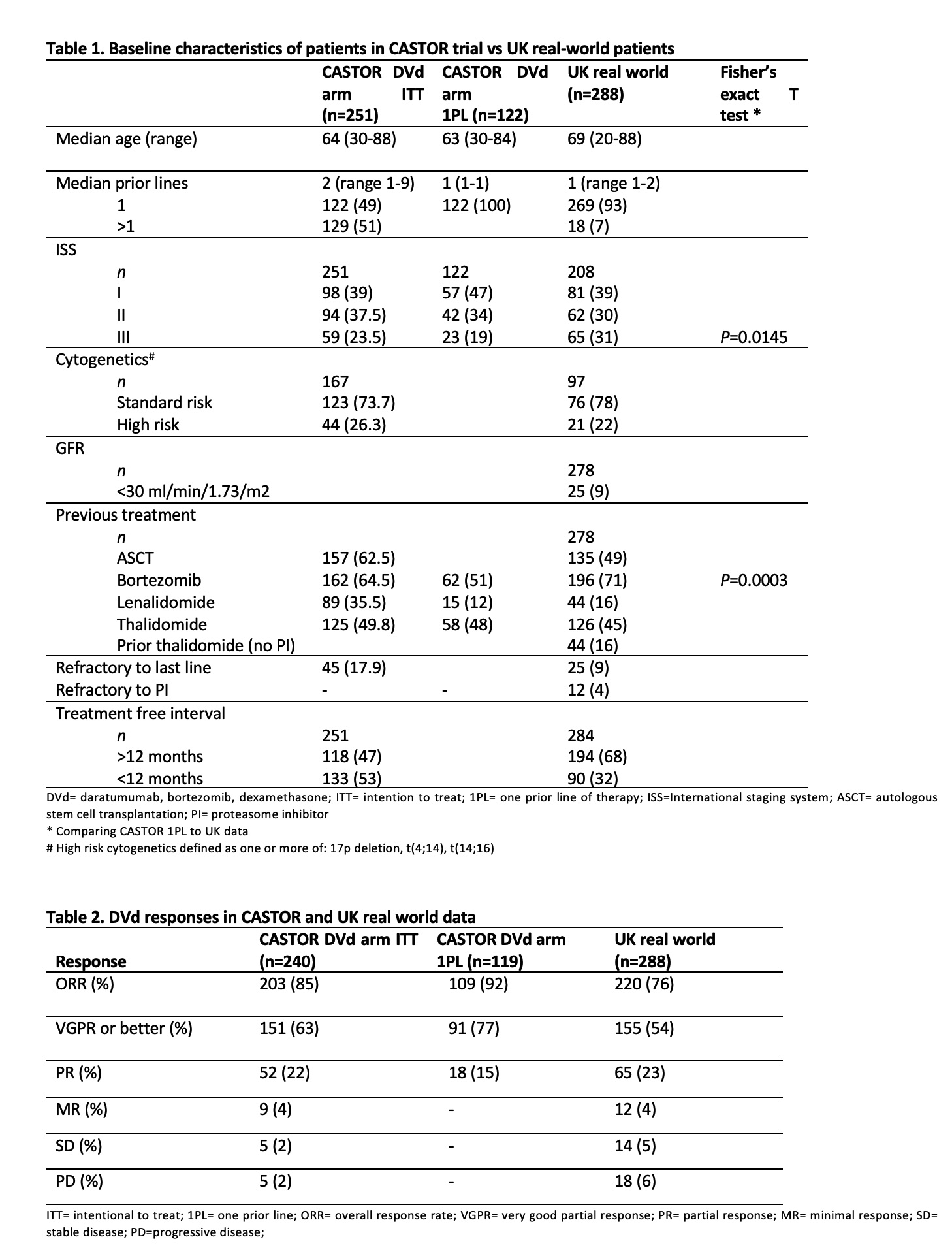