Pre-treatment diagnostic biopsy specimens were double stained for PD-L1 (E1L3N, XP Cell Signaling) and PAX5, single stained for PD-L2 and pSTAT3, and scored by two expert hematopathologists (QC, LBS) for percentage positive cells and intensity of staining. A modified H score was calculated as the product of staining intensity (0-3) and percentage of positive tumor cells (0-100%), ranging from 0 – 300 was calculated for PD-L1, PD-L2, and pSTAT3.

Fluorescence in situ hybridization (FISH) to assess chromosome 9p24.1 CNAs was performed by co-hybridizing PD-L1/PD-L2 probes (target) with the centromeric 9 probe (control). In each case, the percentage and magnitude of 9p24.1 CNAs were evaluated. Four FISH categories were defined based on the target:control ratio and total copy numbers (CNs) of the target per Hodgkin Reed-Sternberg (HRS) cell to include: amplification (ratio≥3), copy number gain (CNGs) (1≤ratio<3), polysomy (ratio~1, CNs=3~5), and disomy (ratio=1, CNs=2). Patients were categorized according to the highest level of 9p24.1 alteration.

We found that after extended follow-up, sequential pembrolizumab and AVD chemotherapy remains a highly effective strategy with 100% of patients remaining alive without relapse. The high response rates observed at all PD-L1/PD-L2 levels in this clinical study suggest that even low levels of PD ligand expression may be sufficient for response to PD-1 blockade in previously untreated cHL. 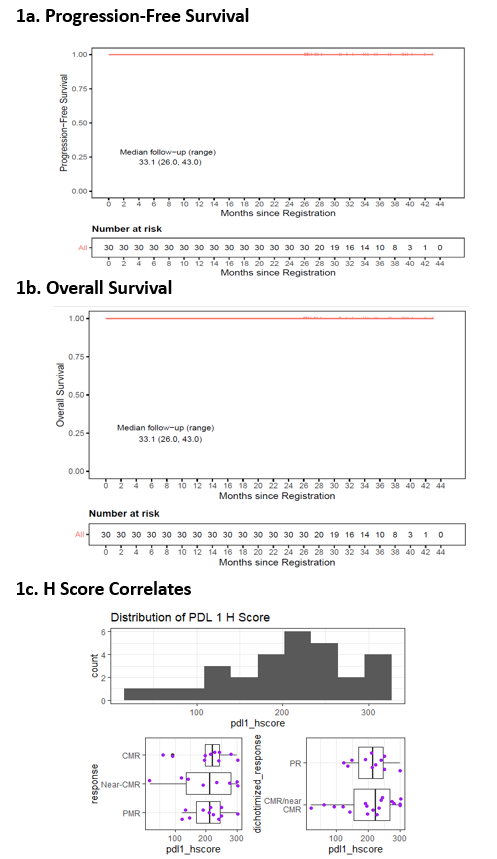