4116 Racial Disparities in the Diagnostic Evaluation of Multiple Myeloma

Introduction: Multiple myeloma (MM) is the most common hematologic malignancy in Black individuals with a 2-to-3-fold higher incidence rate among Black compared to White individuals. While therapeutic advances have led to significant increases in survival rates in MM across races, there still exist racial disparities in outcomes that have been attributed to inferior access to novel therapies and autologous stem cell transplant among Black patients. Risk stratification is an important strategy that allows clinicians to identify high-risk disease and potentially tailor therapy based on staging to try to abrogate its poor prognosis. Current risk stratification schemata in MM, such as the International Staging System (ISS) and Revised ISS (R-ISS), necessitate serum laboratory data and fluorescence in-situ hybridization (FISH) cytogenetic analysis of bone marrow specimens. To the best of our knowledge, it is unknown if discrepancies exist in the initial diagnostic workup of MM between Blacks and Whites, which ultimately may have treatment and outcome implications. We sought to assess the presence of racial disparities in the diagnostic workup of newly diagnosed MM among Black and White patients.

Methods: We performed a retrospective cohort study using the Surveillance, Epidemiology and End Results (SEER)-Medicare linked database, which includes 16,174 MM patients with patient-level demographics, survival data, and health care claims information. The data included patients ≥ 65 years-old with the diagnosis of MM between 2001-2015. Race was documented by SEER registries. Lab and imaging data were collected from 180 days before and after diagnosis to capture an ample and appropriate allotted time for diagnostic workup. CPT codes were queried to determine the frequency of the diagnostic tests of interest. Data were analyzed through R version 4.0.2. Pearson chi-squared tests were used to compare frequency of diagnostic testing between racial groups.

Results: A total of 18,267 MM patients were identified in the SEER-Medicare linked database. Of that, 15,360 MM patients (12,645 White and 2,715 Black) were identified with peripheral blood laboratory, bone marrow, and imaging health care claims data available. The remaining 2,907 patients with a documented race other than White or Black were excluded. Complete blood count and comprehensive metabolic panel serum tests were used to evaluate completeness of CPT codes use, which demonstrated that >89% (13,723/15,360) of individuals had both tests performed. Overall, Black patients had lower frequency of nearly all serum and imaging tests completed relative to White patients (Table 1). Only 61% of White patients underwent the testing components necessary to adequately risk-stratify disease by ISS (e.g., beta-2 microglobulin) compared to 50% of Black patients (relative difference 21%). 30% of White individuals underwent the components to determine R-ISS (e.g., FISH cytogenetics). There were low overall rates of FISH cytogenetics obtained in the study population, with White individuals undergoing FISH cytogenetics at a rate of 30% compared to 25% among Black individuals (relative difference 18%). Magnetic resonance imaging (MRI) of the lumbar spine, the most commonly imaged portion of the spine by MRI, was performed more commonly in White vs Black individuals (33% vs 24%, relative difference 35%). PET/CT was performed in only a small percentage of patients (Whites 9% vs Blacks 5%, relative difference 94%).

Conclusions: In a real-world analysis of patients with newly diagnosed MM, we found that Black patients were less likely than White patients to undergo a complete initial diagnostic evaluation. While rates of beta-2 microglobulin and FISH cytogenetics testing were low among all patients, Black patients were less likely to undergo testing needed to complete staging for ISS/R-ISS or proper imaging to assess for extramedullary disease (i.e., PET/CT). Whether these differences between the races in the initial diagnostic workup lead to differences in treatment strategies and survival outcomes deserves additional investigation. Further work is needed to improve access to complete diagnostic evaluation among Black patients with newly diagnosed MM. 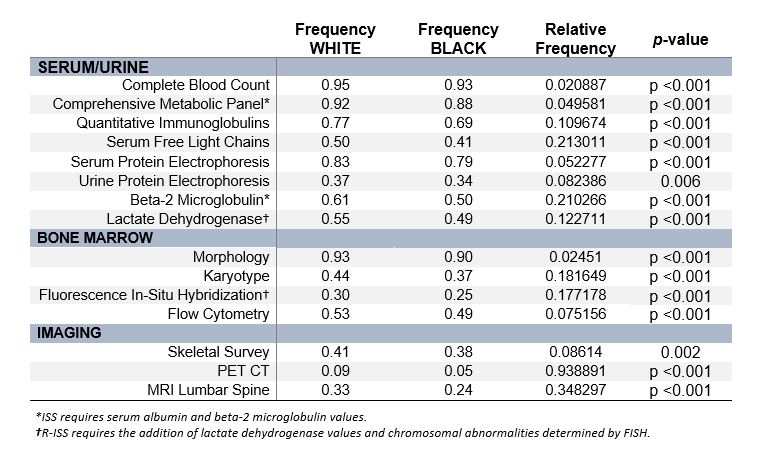