Background: AL amyloidosis is the most frequent type of amyloidosis caused by the deposition in tissues of fibrillar aggregates composed of an abnormal immunoglobulin (Ig) light chain (LC) and leading to organ dysfunction. The most frequent and severe forms involve kidney and heart. Research on this disease suffers from the lack of reliable animal models, that could allow a better understanding of the disease and the design of new therapeutic strategies. In the present study, we aimed at reproducing AL amyloidosis in a mouse model.

Methods: We developed an original transgenic approach using an insertion of a human pathogenic LC gene in the endogenous mouse kappa locus, such as the LC is produced by the naturally Ig producing B and plasma cells. Then, to avoid the association of human LCs with endogenous murine HCs, we backcrossed this strain with the DH-LMP2A mice, characterized by a high number of plasma cells devoid of endogenous HC. This strategy leads to a production of the human free LC similar or higher than in patients and proved efficient to reproduce in mice several monoclonal gammopathies of clinical significance (MGCS) (Fig.1A).

Results: Despite strong LC production (Fig.1B), mice did not naturally develop AL amyloidosis. In vitro, the full length LC was resistant to amyloid formation at physiological conditions but the variable domain (IGLV6) showed high propensity to form fibrils. A single injection of amyloid fibrils and/or seeds, obtained from the variable domain (VL) of the human LC gene, led to amyloid deposits starting at 1 month post-injection, especially in the heart, spleen, liver and, to a lesser extent, in the kidney (Fig.1C). We confirmed that the deposits contain the full-length human LCs, which elongate VL fibrils in vivo (Fig.1D).

Conclusions: This is, to our knowledge, the first transgenic mouse model of AL amyloidosis closely reproducing human lesions, especially in heart. Further studies are needed to better understand the early biochemical events leading to AL amyloidosis in vivo, but this model already shows that a partial degradation of the LC is likely required to initiate amyloid fibrils and that once seeded, the full length LC can elongate these fibrils. This mouse model opens new perspectives to better understand the toxicity of amyloid LC, their involvements in different biological processes and organ dysfunction and of course, to test new therapeutic approaches. 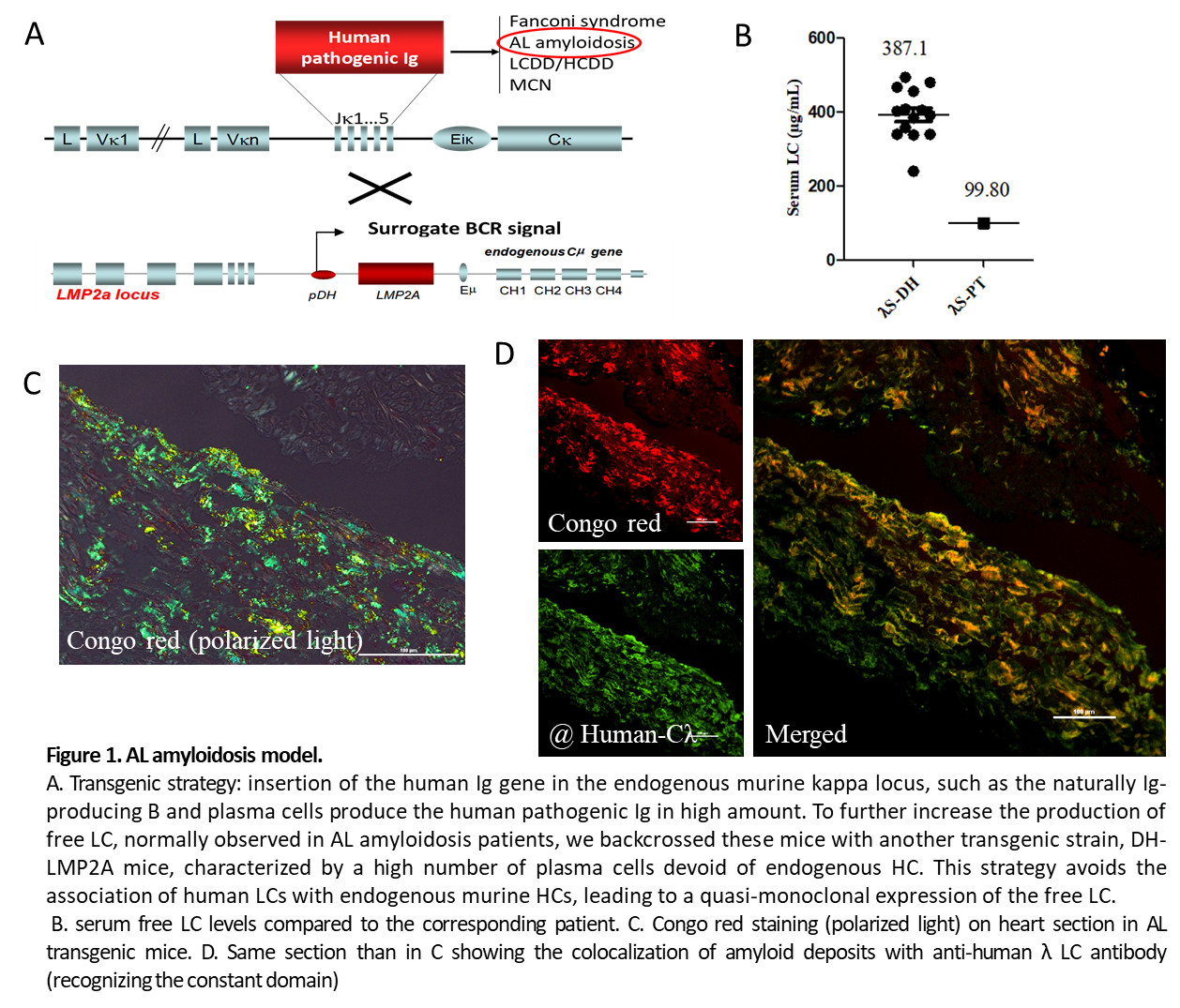