Adolescents and Young Adults (AYA) represent a specific population in the Acute Lymphoblastic Leukemia (ALL) landscape, often presenting high-risk diseases and increased chemotherapy-related toxicities. Indications of Hematopoietic Stem Cell Transplantation for pediatric patients (HSCT) have been restricted to those with early poor response to chemotherapy. The same trend has led to a decrease of HSCT indications in AYAs, which are nevertheless still more frequent than in younger counterpart. Outcomes of AYAs after HSCT seemed to be worse than the ones of children in two previous studies published in 2013 and 2014. In Minneapolis, the decrease of overall survival in AYA was attributed to an excess of Treatment Related mortality (TRM) (28% versus 14%; p=0.04), but because of small numbers, factors influencing TRM were not identified. Our study aimed to compare, in a large cohort, the outcomes of children and AYA with ALL after HSCT and to determine factors influencing potential differences.

All patients aged between 1 and 25 years, reported in the SFGM-TC (Francophone Society of bone marrow transplantation and cellular therapy) registry, who received a first HSCT in treatment for ALL between 2005 and 2012 were included. The AYA group was defined by age range between 15 and 25 years old, according to European studies and the SFGM-TC. Data about diagnosis and transplantation procedure were prospectively collected in the registry. Before transplant procedure, patients or their parents/guardians provide a signed consent in order to be included in the registry.

AYA or patients aged more than 10 years, compared to ones aged less than 10 years have a worse outcome after HSCT for ALL. Excess of death in this specific population is mainly due cGvHD. Transplantation practices in those patients, particularly choice of stem cells source and GvHD prophylaxis, should be discussed. Their treatment adherence should also be questioned and reinforced by development of multidisciplinary teams. 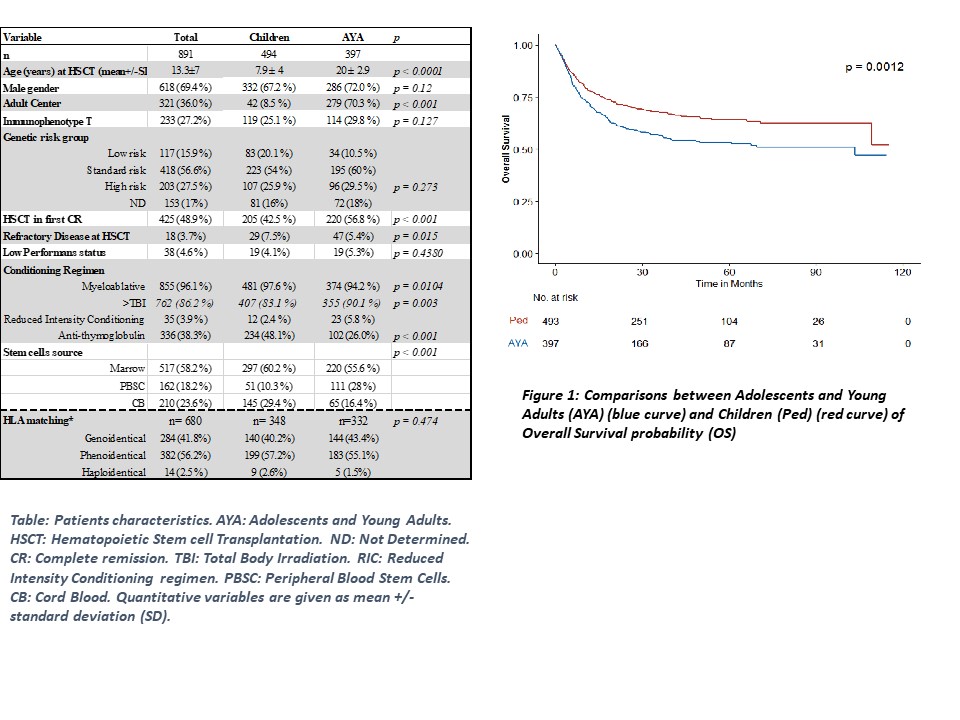