Aims: The absolute number of chronic phase CML patients (pts) reaching the treatment-free remission (TFR) criteria has been substantially increased by the use of second-generation TKI (TKI2), initiated since diagnosis, comparing to Imatinib first-line. However, the relative rate of unsuccessful TFR (i. e. pts loosing their MMR after TKI2 cessation) still remains around 50% at 2 years and beyond, whatever the TKI2 was. The aim of this study is to analyse the rate of successful TFR in pts receiving Nilotinib (Nilo) or Dasatinib (Dasa) first-line obtaining the appropriate criteria.

Methods: Observational retrospective study in 3 reference centers of the French group of CML lead between 2010 and 2021. Eligible pts were CP CML pts initiating either Nilo 300 mg BID or Dasa 100 mg daily since diagnosis, until cessation for sustained MR4.5 (i.e. ≥2 years on ≥4 datapoints). Data were retrospectively collected according to the national regulations with pts’ information. All pts were assessed and followed according to ELN recommendations 2009, 2013 and 2020 along treatment and to the recommendations from the French group of CML (D. Rea et al., Cancer 2018) for TFR. In this regard, the TKI2 was resumed in case of loss of MMR. All BCR-ABL1 assessments were performed in the 3 reference laboratories, standardised and expressed in % (IS) with ≥32,000 copies of ABL1 as control. All patients were harbouring major BCR-ABL1 transcripts. The primary endpoint was the survival without loss of MMR after TKI2 cessation. The secondary endpoints were the kinetics of MMR loss, and the identification of factors influencing MMR loss.

Conclusions: As it is likely that no prospective head-to-head comparison will be performed in this setting, on this limited series of pts, we conclude that the outcome of TFR seems to be different according to the TKI2 used since diagnosis, suggesting the impact of distinct biological variables modified by the type of TKI2 on the long run (such as immunological system, BM micro-environment, others) on TFR outcome. 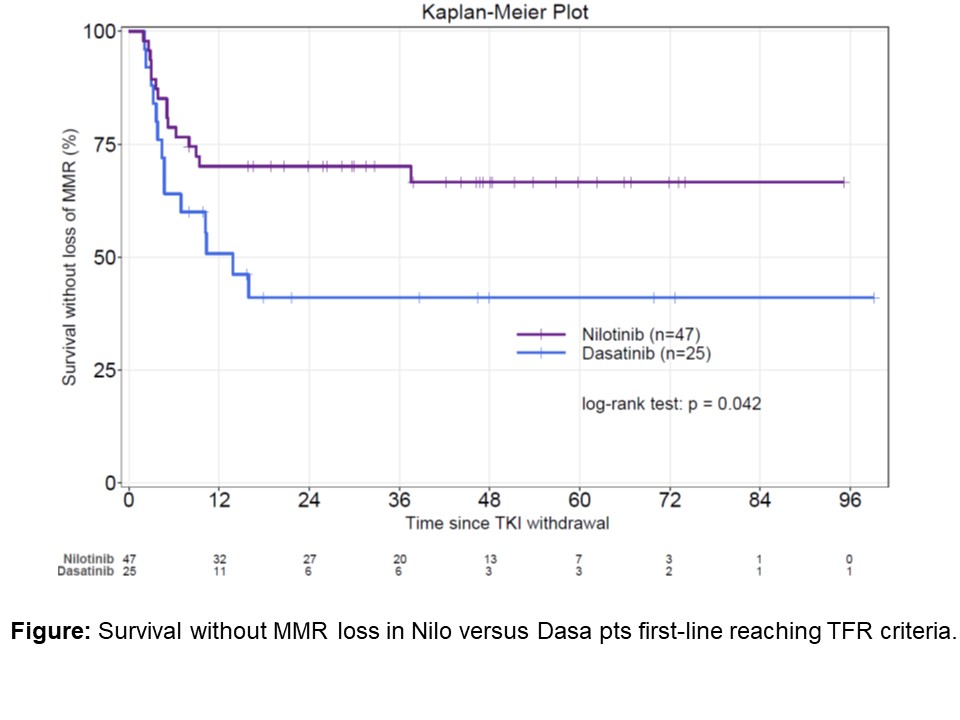