Next, we examined the contribution of donor T and B cells to the suppression of MCMV reactivation by IL-6R inhibition. At 2 – 3 weeks after BMT and prior to MCMV reactivation, cytokine (IFNɣ/TNF) secretion from CD4+ T cells (in response to MCMV infected DC) was not detectable; MCMV m38 tetramer+ CD8 T cells were present at very low frequencies (< 0.1% of CD8 T cells) which were not altered by IL-6R ablation. The frequency of CXCR-5+PD-1+ TFH cells was comparable or lower in IL-6R–/– vs wild-type (WT) T cells after BMT. Transplant of BM from B6.μMT mice (unable to generate mature B cells and plasma cells) did not increase MCMV viremia (Fig 1B), excluding a role for donor B cells. Thus, early MCMV reactivation in the presence of IL-6 is independent of MCMV-specific T cells and donor B cells.

To study the effects of IL-6 on recipient-derived humoral immunity we quantified MCMV-specific IgG in plasma after BMT and found that levels were significantly higher in recipients of IL-6R–/– T cells (Fig 1C). Furthermore, MCMV-IgG levels in plasma correlated with MCMV viremia (r = – 0.72, P < 0.0001) and viral loads in liver (r = – 0.68, P < 0.0001). MCMV-IgG2a, which can only be generated by B6D2F1 recipients, was significantly higher in recipients of IL-6R–/– T cells, confirming that differences in humoral responses were of recipient-origin. To define relevant mechanisms, we examined the kinetics of IgG after BMT by monitoring the loss of murine IgG (transferred on day 0) in plasma (Fig 1D). Recipients of IL-6R–/– T cells showed significantly slower loss of IgG than recipients of WT T cells, with or without GVHD prophylaxis with cyclosporine (CSA). Thus, ablation of IL-6 signaling in donor T cells is associated with reduced loss of recipient IgG and protection from MCMV reactivation, an outcome which seems independent of the effects of IL-6 on GVHD.

We correlated our findings with data from a recent randomized, placebo-controlled, double-blind phase III clinical trial of TCZ administration on Day -1 of BMT (Kennedy GA et al, Blood 2021). TCZ reduced CMV reactivation in at risk seropositive BMT recipients of volunteer unrelated donor grafts regardless of acute GVHD (all at risk recipients, TCZ vs. control: 12/26 vs 21/28, P = 0.03; at risk without grade 2-4 GVHD, TCZ vs control: 6/18 vs 9/13, P = 0.03). TCZ did not alter the frequency of B cells or the frequency and function of HCMV-specific CD8+ T cells, quantified by HCMV-pMHC tetramer-staining and HCMV peptide-specific cytokine (IFNγ/TNF) secretion. In contrast, levels of HCMV-specific IgG at day +30 in HCMV-seropositive recipients were significantly higher in the TCZ versus control group (Fig 1E). Consistent with our preclinical studies, the level of HCMV-IgG significantly and inversely correlated with early HCMV reactivation (within 35 days) after transplant.

These data confirm the importance of recipient-derived humoral immunity in controlling early CMV reactivation in clinical BMT recipients. Critically, we demonstrate the ability of IL-6R blockade to maintain protective humoral responses until effective donor-derived adaptive immunity can be generated. 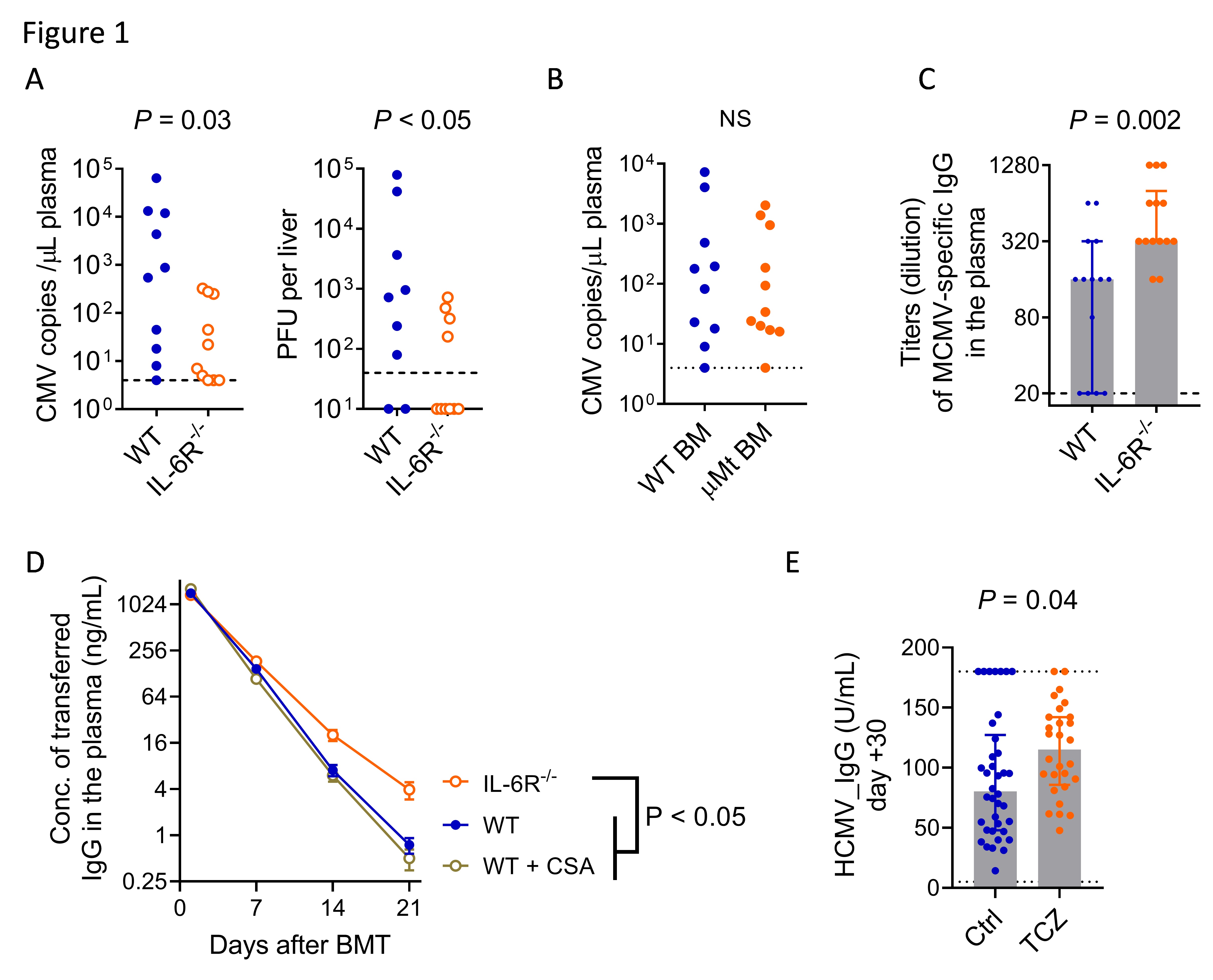