1635 Outcomes Among Primary Refractory Multiple Myeloma Patients in the Era of Monoclonal Antibodies: The Yale Experience

Introduction: Multiple myeloma (MM) is an incurable yet highly heterogeneous disease of clonal plasma cells. The role of induction therapy is to achieve a complete response, thereby reducing the number of malignant plasma cells in the bone marrow. Partial responses or less are considered suboptimal and are associated with poorer outcomes. Following the approval of monoclonal antibody (mAb) therapies in MM, little is known of their effect on primary refractory and suboptimal responses in real-world populations.

Methods: This retrospective cohort study included patients with clinical MM who were diagnosed and treated within the Yale New Haven Health System between 2009-2019. Our primary aim was to evaluate the overall survival (OS) in patients with primary refractory (PriRef) or suboptimal responding disease compared to those who achieved at least a very good partial response (≥VGPR). PriRef disease was assessed following three months of induction therapy, and was defined as a partial response, stable disease, or progressive disease based on International Myeloma Working Group (IMWG) criteria. A stricter cutoff of less than a VGPR was chosen for our definition of PriRef, because deeper responses, including MRD-negative status, have demonstrated increasingly important prognostic value. Descriptive statistics and OS analysis were performed with 2-tailed contingency χ²-tests, t-tests, Kaplan Meier, and log-rank tests using GraphPad Prism v8.

Results: 246 patients (pts) with adequate response data following 3 months of induction therapy were identified. Clinical features included median age at diagnosis of 61 years (range, 34-92), 26.8% of whom were 70 years or older, 54.9% male, 63.4% Caucasian, 24.3% Black or African American, and 11% Hispanic. 46.8% had International Staging System (ISS) stage II or III disease and 41.1% had Revised International Staging System (R-ISS) stage II or III disease. 33.3% of patients had high-risk cytogenetics, which was defined as a del17/17p, t(4:14), t(4;16), t(4;20), gain or amplification of 1q, deletion of 1p, and chromosome 1 translocations. 81.7% of this cohort received a triplet or quadruplet induction regimen. The majority of patients received triplet induction regimens that included immunomodulatory and proteasome inhibitor combinations, and only two patients were prescribed quadruplet therapy. 44.7% of patients received autologous stem cell transplant (ASCT) at some point in their treatment course, with 79.1% (87/110) in the upfront setting and 20.9% (23/110) having delayed ASCT (Table 1).

In this cohort, 122 pts (49.6%) achieved ≥VGPR and 124 pts (50.4%) were PriRef. There were no significant differences in the baseline demographics, ISS, R-ISS, or cytogenetic characteristics between ≥VGPR and PriRef. PriRef patients were less likely to have been treated with at least a triplet induction regimen than ≥VGPR (74.2% vs. 89.3%, p <0.01), and they were also less likely to have undergone ASCT (37.1% % vs. 52.5%, p = 0.02). When the two cohorts were stratified by upfront versus delayed ASCT, PriRef pts still demonstrated lower rates of ASCT in both settings, but the differences were not statistically significant (Table 1). There was no significant difference in OS between PriRef and ≥VGPR pts. Median OS for PriRef was 102.9 months compared to 114.9 months in ≥VGPR (p = 0.27) (Figure 1). Out of the 124 PriRef pts, 78 (62.9%) went on to receive subsequent lines of therapy. 39.7% of these PriRef pts received a mAb, such as daratumumab, elotuzumab or isatuximab, in the 2nd or 3rd line setting. When stratified by whether they received mAb therapy, median OS of PriRef pts who did not receive a mAb was 86.6 months, whereas median OS was not reached for the PriRef pts who received a mAb (p=0.98) (Figure 2).

Conclusions: Our cohort analysis showed that early primary refractoriness to induction in newly diagnosed MM patients was not associated with a lower overall survival, despite lower utilization of triplet regimens and ASCT. Treatment with monoclonal antibodies in the 2nd and 3rd line setting may explain this finding. Since the approval of mAbs for myeloma, OS appears to be beneficially impacted. However, the effect of this class of therapy is yet to be fully appreciated in the real-world setting. Therefore, longer follow up data is needed to better assess the true impact of monoclonal antibodies on primary refractory multiple myeloma patients. 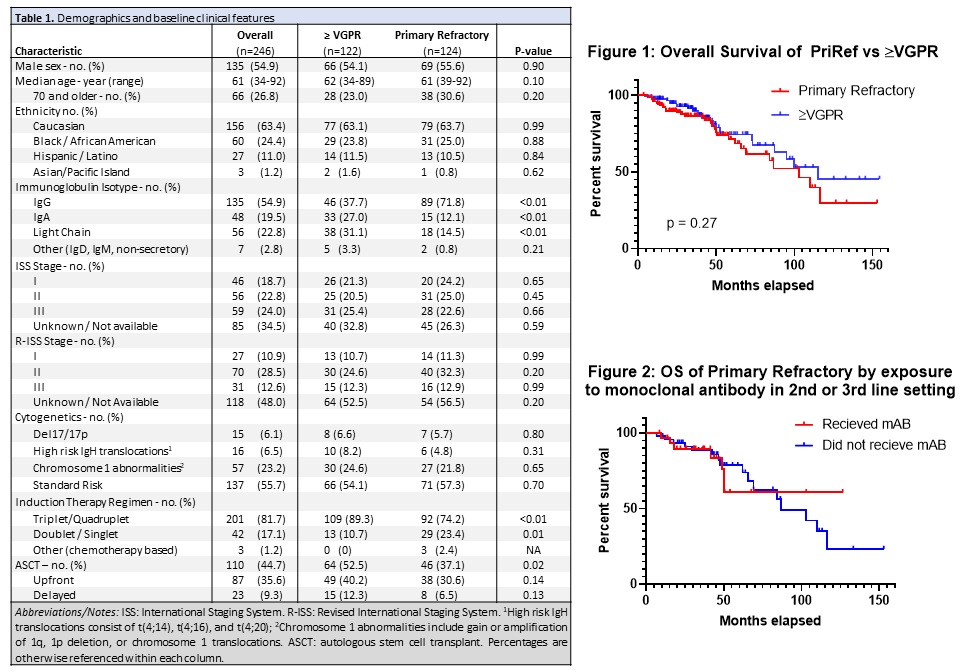