Hemophilia A (HA) is a rare genetic disease characterized by a deficiency in clotting factor VIII (FVIII). Persons with HA suffer from spontaneous and traumatic bleeds which significantly impact short- and long-term quality of life. Prophylaxis treatment with FVIII replacement or non-factor replacement (e.g. emicizumab) intends to prevent bleeding episodes. To date, clinical comparisons between FVIII and emicizumab are limited to non-interventional studies and indirect comparisons. Comparisons of costs are limited to cost-effectiveness models or observational studies that include patients with and without inhibitors. An increase in availability of real-world data since emicizumab’s approval in 2018 has created opportunity for comparative outcomes research in the non-inhibitor HA population.

This retrospective, observational, pre-post study used the IQVIA PharMetrics® Plus database (2015-2020)—a large longitudinal US commercial health plan database with over 190 million lives. International Classification of Diseases codes (ICD-10), National Drug Codes, and Healthcare Common Procedure Coding System were used to identify diagnoses, therapies, and procedures. Males with ≥1 claim for emicizumab who were on prophylaxis treatment with FVIII prior to initiating emicizumab were included in the analysis. Patients who received bypassing agents, immune tolerance induction, or rituximab were assumed to have inhibitors and were excluded. Patients with ≥2 occurrences of any of the following diagnoses were excluded: von Willebrand disease, hemophilia B, acquired HA, or other coagulation disorders.

Annualized bleed rate was defined as billed ABR and represents bleeding episodes that required evaluation, treatment, or procedure resulting in an ICD-10 claim. Therefore, bleeds treated at home and untreated bleeds were not captured. A clinical review of ICD-10 codes resulted in a list of 535 codes used to identify HA-related bleeding episodes (e.g. hemarthrosis). The ACC were calculated as the mean cost per patient per year in 2020 US dollars actually paid by the insurer. Descriptive statistics were used to summarize, and Bayesian models were developed to compare, ABRb and ACC in the pre- and post-switch periods. Bayesian inferences estimated the population mean difference in ABRb and ACC after switching from FVIII prophylaxis to emicizumab. Inferences were conducted by computing posterior probabilities for hypotheses and summarized with 95% credible intervals (CrI). 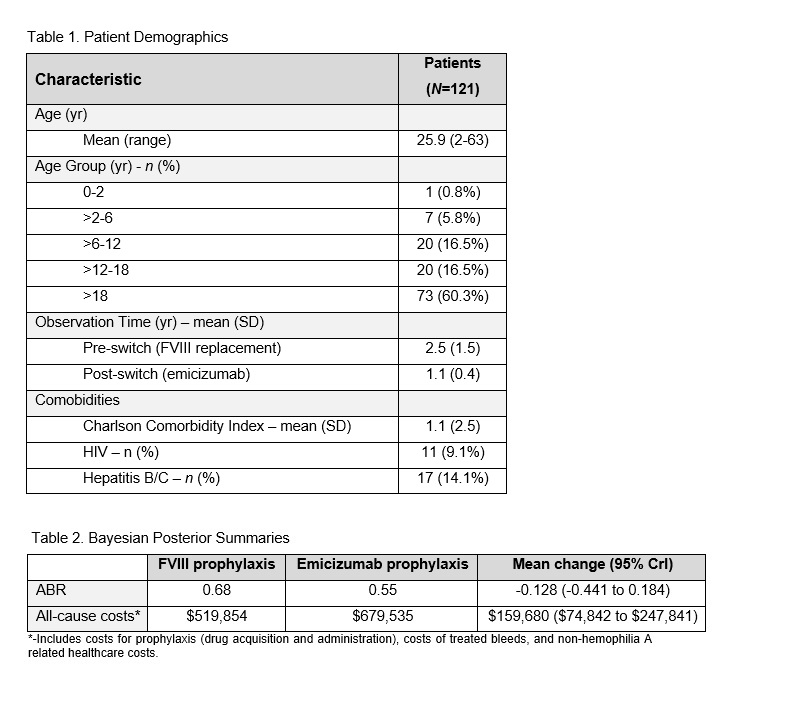