65 Lenalidomide and Eltrombopag for Treatment in Low or Intermediate Risk Myelodysplastic Syndrome: Result of a Phase 2 Study Combination Clinical Trial

Lenalidomide (LEN) is approved for treatment of Myelodysplastic Syndrome (MDS) with chromosome 5q deletion (del 5q) as it has shown to induce disease remission and transfusion independence in close to 65% of this population. For patients (pts) without del 5q, LEN has shown to reduce transfusion needs in one-quarter of pts, but its use is limited by significant thrombocytopenia, and pts with platelet counts (PLTs) <50,000 have been excluded from these trials. Eltrombopag (ELT), a TPO-R agonist, has proven to be effective increasing PLTs in MDS. Furthermore, preclinical data has demonstrated that ELT can reverse anti-megakaryopoietic effects of LEN in MDS patient samples. Based on this rationale, we conducted a study to determine the safety and efficacy of the combination of eltrombopag and lenalidomide (ELT/LEN) in low and intermediate (low/int) risk MDS (NCT01772420).

Pts aged ≥18 years with low/int risk MDS per IPSS, or non-proliferative chronic myelomonocytic leukemia (CMML), with bone marrow blasts <10% at baseline, without prior exposure to LEN or ELT and with symptomatic anemia were enrolled. Pts with PLTs ≥50,000 (Arm A) received LEN alone at 10mg PO daily (qd) on days 1-21. If PLTs fell <50,000, LEN was discontinued and ELT PO qd given until PLTs ≥50,000 for 2 weeks (wks). Pts then resumed LEN. If PLTs fell <50,000 again, pts received ELT as before and then received concomitant LEN and ELT. Pts with PLTs <50,000 (Arm B) received ELT alone qd on days 1-28 until PLTs ≥50,000 for 2 wks. Pts then received treatment as in arm A. Both arms had 28-day cycles. ELT was initiated at 100mg PO qd and escalated up to 300mg PO qd until response was achieved. The primary objectives of the study were to evaluate the rate of hematologic improvement (HI) of ELT/LEN as per 2006 IWG criteria, and to evaluate the safety and tolerability of the combination.

ELT/LEN was w­­­ell tolerated. Non-hematological grade 3-4 treatment-related adverse events were few, including G3 hyperbilirubinemia (7%), G3 transaminitis (2%), G3 diarrhea (2%), G3 arthralgias (2%). 2 pts had major bleeding events; there were 2 deaths, one attributable to pneumonia and one to gallbladder cancer. 1 of 31 pts who received ELT had a reversible increase in peripheral blasts while on treatment, and 1 pt had development of marrow fibrosis after 6 years of ELT.

Treatment with ELT/LEN demonstrates good efficacy with ORR of 40.9%, response durability and an acceptable safety profile for evaluable pts with low/int risk MDS. ELT can lead to single agent responses with an acceptable safety profile and sizable proportion of multilineage responses. One patient developed bone marrow fibrosis and one patient had a transient increase in blasts, hence, undermining these pre-existing safety concerns. Lastly, using our study schema 32% of pts were able to initiate or continue LEN achieving a 36% ORR whereas in prior studies these pts would have been excluded. 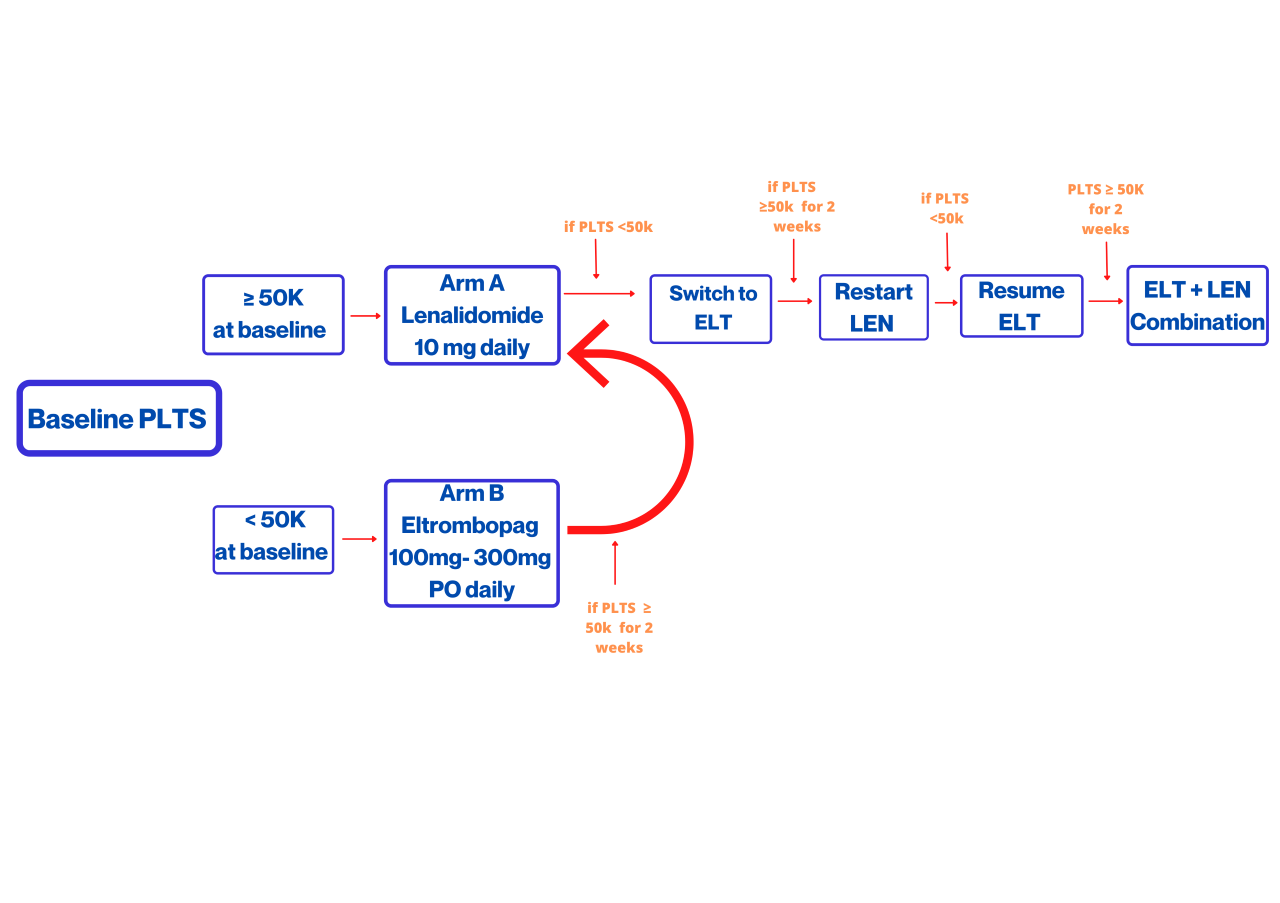 OffLabel Disclosure: Lenalidomide has shown to be effective achieving RBC Transfusion Independence in Myelodysplastic Syndromes without deletion 5q Eltrombopag is a TPO-R agonist, its purpose in this trial is to evaluate if it would increase platelet counts in patients with Myelodisplastic Syndrome.