Since its approval in 2015, daratumumab has become incorporated in standard-of-care regimens of antimyeloma therapy. However, response to daratumumab in patients with relapsed/refractory multiple myeloma (RRMM) is heterogeneous, and a reliable biomarker of response is lacking. Expression of CD38 was shown to be associated with response to daratumumab, but failed to predict responses consistently and is therefore not used in clinical practice.

Aim of our study was to develop an in vitro method that accurately identifies patients with RRMM that will respond to daratumumab treatment.

We obtained CD38 mean fluorescent intensity (MFI) of plasma cells from patients with RRMM just before starting daratumumab therapy, as well as best clinical response to treatment and duration of response to daratumumab in weeks. When possible, extra material was obtained at the bone marrow biopsy performed before the start of daratumumab treatment and frozen in liquid nitrogen in our local biobank facility. All included patients provided written informed consent.

Bone marrow mononuclear cells from patients with RRMM were thawed and cultured for a week in a hydrogel-based culture system, supplemented with pro-survival cytokines IL-6 and APRIL. To examine the in vitro response to daratumumab, we added 0.1 μg/ml daratumumab or 0.1 μg/ml IgG1κ isotype to the culture wells. We measured complement-dependent cytotoxicity (CDC) by adding 10% pooled human serum and antibody-dependent cellular cytotoxicity (ADCC) by adding healthy-donor peripheral blood mononuclear cells (PBMC) in a 10:1 effector-to-target ratio. After overnight incubation, hydrogel cultures were broken down mechanically and specific lysis was determined with flow cytometry, using CD138 and CD38 multi-epitope antibodies to select plasma cells, and using ToPro3 live/dead stain and Flow-Count Fluorospheres to obtain absolute numbers of surviving plasma cells.

First, we analyzed CD38 MFI of plasma cells from 35 patients with RRMM just before starting daratumumab treatment, both as monotherapy or as part of a regimen. As was previously reported by others1,2, we found a significant association between expression of CD38 and response (p = 0.01) (Figure 1A). However, we also observed considerable overlap between CD38 MFI values of responders and non-responders, with AUCROC = 0.75. Therefore the discriminatory value of CD38 expression to predict response is weak.

In summary, we developed an straightforward and consistent in vitro method to predict response to daratumumab treatment in vivo. Measuring ADCC in patient-derived plasma cells using healthy-donor PBMC within our hydrogel-based culture system corresponds with the overall clinical response and duration of response to daratumumab. Our results support further clinical validation of the in vitro use of primary plasma cells to identify patients most likely to benefit from treatment. 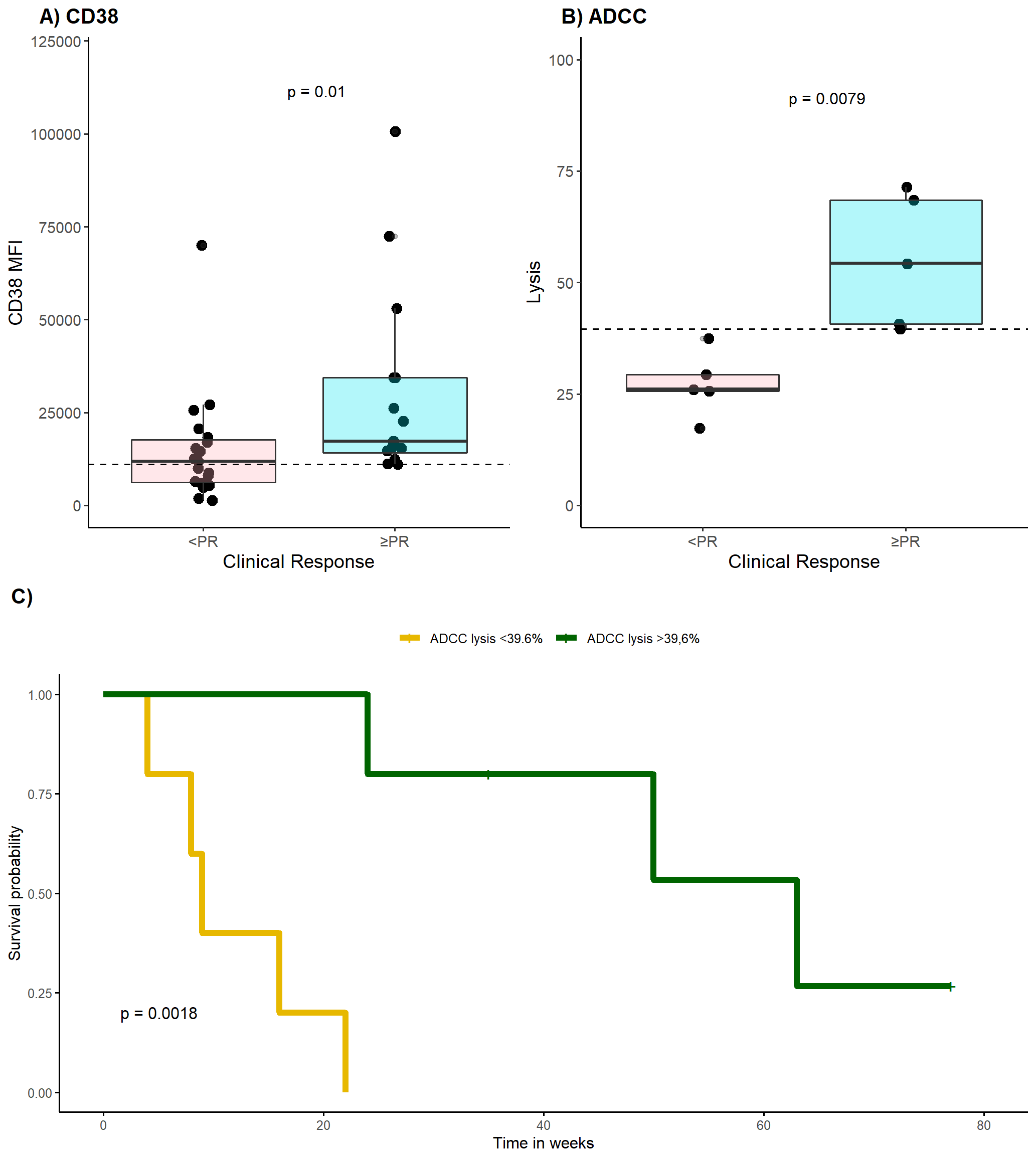