The addition of fludarabine to cyclophosphamide as lymphodepleting regimen prior to adoptive transfer of CD19 chimeric antigen receptor (CAR) T cells significantly improves CAR T cell expansion and correlates with longer B cell aplasia and a decreased probability of developing a CD19+ relapse (Gardner, 2017). Dosing of fludarabine is currently based on body surface area. We previously showed that this leads to a highly variable plasma exposure that correlates with clinical outcome after allogeneic hematopoietic cell transplantation (Langenhorst, 2019). We therefore hypothesized that optimal exposure of fludarabine might be of clinical importance in the CD19 CAR T setting.

An observational cohort analysis was conducted with data from 26 consecutive patients receiving tisagenlecleucel as treatment for refractory/relapsed B cell acute lymphoblastic leukemia (B-ALL; table 1). Prior to CAR T cell infusion, patients received fludarabine on 4 consecutive days at a daily dosage of 30 mg/m2 and cyclophosphamide on 2 consecutive days at a daily dosage of 500 mg/m2. Fludarabine concentrations were measured longitudinally after fludarabine infusion using a liquid chromatography mass spectrometry method. The total exposure (Area Under the Curve (AUC0−∞)) was subsequently determined using a fludarabine population pharmacokinetic model (Langenhorst, 2019). The study was performed in accordance with the Declaration of Helsinki. The primary outcome parameter was leukemia free survival, defined as the time between CAR19 T cell infusion and the moment of measurable leukemic blasts (>5% or >0.01% by two subsequent measurements). The effect of fludarabine on leukemia free survival and the secondary outcome measures CD19+ relapse and B cell aplasia were explored using martingale residuals and further identified by fitting univariable Cox Proportional Hazards models. In addition, Kaplan Meier and cumulative incidence curves were plotted and compared with log-rank tests. To compare CAR T cell numbers over time in peripheral blood, the AUCs were computed and compared between exposure groups with the Mann-Whitney test. Analyses were performed using R4.03 with packages pknca, survival and survminer.

The fludarabine AUC0−∞ was highly variable, resulting in a large range of 8.7-21.8 mg*h/L. Exposure of fludarabine was shown to be a predictor for leukemia free survival, B cell aplasia, and CD19+ relapse following CAR T cell infusion. Minimal event probability was observed at a cumulative fludarabine exposure ≥14 mg*h/L and underexposure was therefore defined as an AUC0−∞ <14 mg*h/L. In the underexposed group, leukemia free survival was lower (p<0.001; Figure 1A) and the occurrence of CD19+ relapse was higher (p<0.0001; figure 1B) compared to the group with an AUC0−∞ ≥14 mg*h/L. Furthermore, the duration of B cell aplasia was shorter (p=0.009) and the AUCs of CAR T cell numbers lower (p=0.03) in the underexposed group. No significant differences in baseline characteristics were present between the two exposure groups.

LD and FC contributed equally to this study. 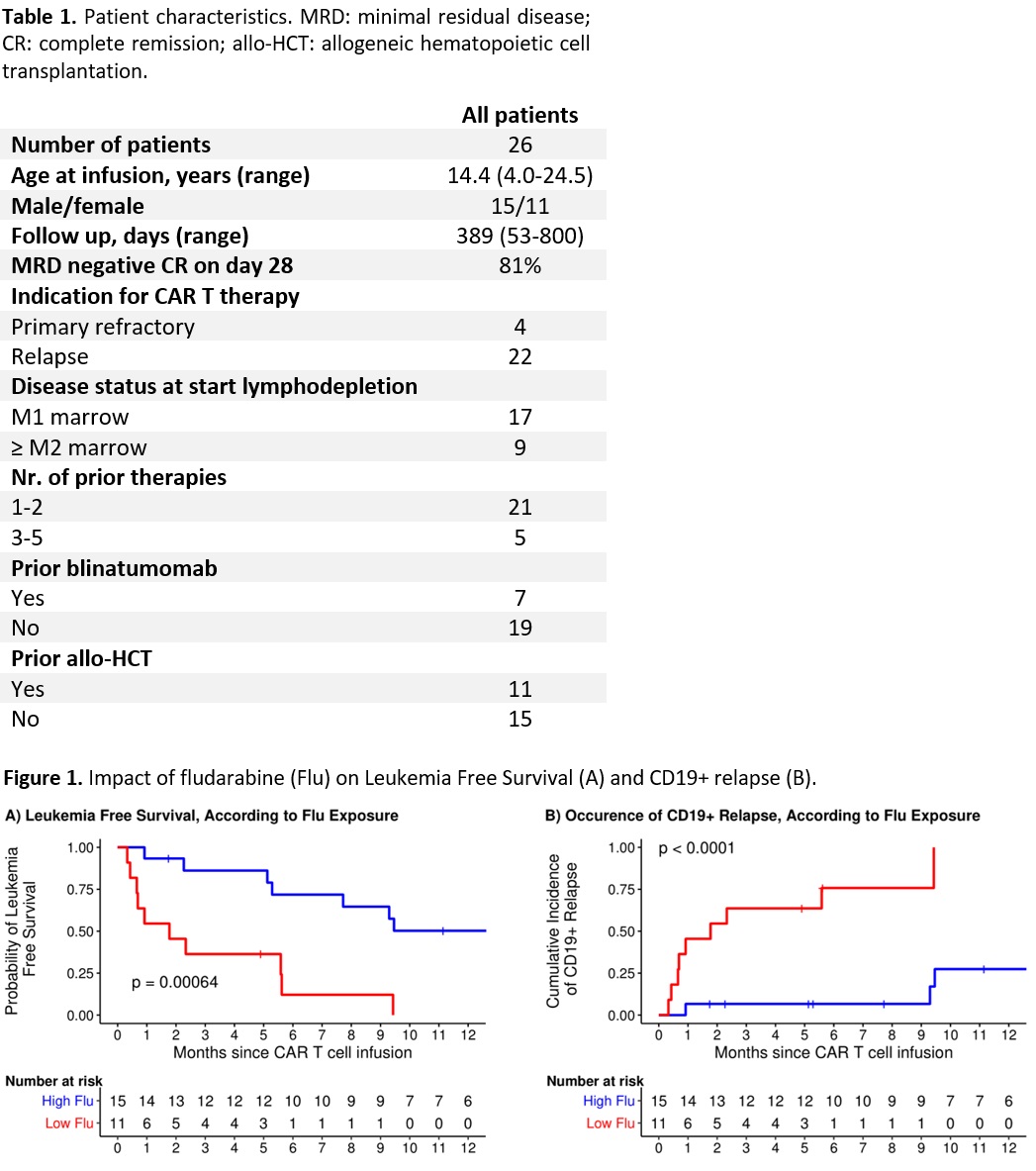