Long-term follow up of prospective studies has shown that continuous Bruton’s tyrosine kinase inhibitor (BTKi) therapy leads to durable remissions in previously untreated TP53-altered CLL. Additionally, combining BTKi with the BCL2 inhibitor venetoclax (VEN) achieves deep remissions with similar rates of undetectable measurable residual disease in these high-risk patients (pts) compared to those with wildtype TP53. Without randomized data, it is unclear which pts would benefit most from combined targeted therapy over BTKi monotherapy. It is also unknown how size of the TP53-altered clone influences efficacy of BTKi therapy. We performed a retrospective analysis of pts with CLL with baseline deletion 17p [del(17p)] and/or mutated TP53 (TP53-m) treated with BTKi +/- VEN +/- CD20 mAb in the first-line setting.

Pts with CLL/SLL and pretreatment testing (FISH and TP53 sequencing by NGS assay in >95% of pts with 1% limit of detection) performed at our institution (MDACC) demonstrating del(17p) and/or TP53-m who received first-line BTKi-based therapy were included. Pts started treatment between March 2012 and June 2021. The primary endpoint was progression-free survival (PFS) from therapy start. Pts were categorized into those who received first-line BTKi +/- CD20 mAb versus combined BTKi and fixed-duration VEN +/- CD20 mAb. Outcomes were analyzed by baseline characteristics, including size of the TP53-altered clone (% cells with del(17p) and variant allele frequency [VAF] for TP53-m).

We report favorable 4-year PFS and OS rates of 72.7% and 87.2% in a large retrospective cohort of pts with TP53-altered CLL receiving first-line BTKi-based therapy. The clone size either by % FISH+ or by TP53-m VAF was not associated with PFS, which may reflect the high efficacy of BTKi. PFS appears longer for pts treated with BTK + VEN compared to BTKi only pts, and there was a trend towards improved OS. Though the BTKi + VEN group had lower rates of TP53-m and multiple TP53 alterations, neither characteristic was associated with shorter PFS. Heterogeneity in patient follow-up and response assessment schedule across this pt cohort could be a confounding factor. Whether combination fixed-duration BTKi + VEN is preferable over sequential treatment with these agents remains an unanswered question; this is especially pertinent in pts with high-risk genomics. Therefore, studies dedicated to enrolling such patients are needed to formally clarify optimal treatment for these high-risk patients. 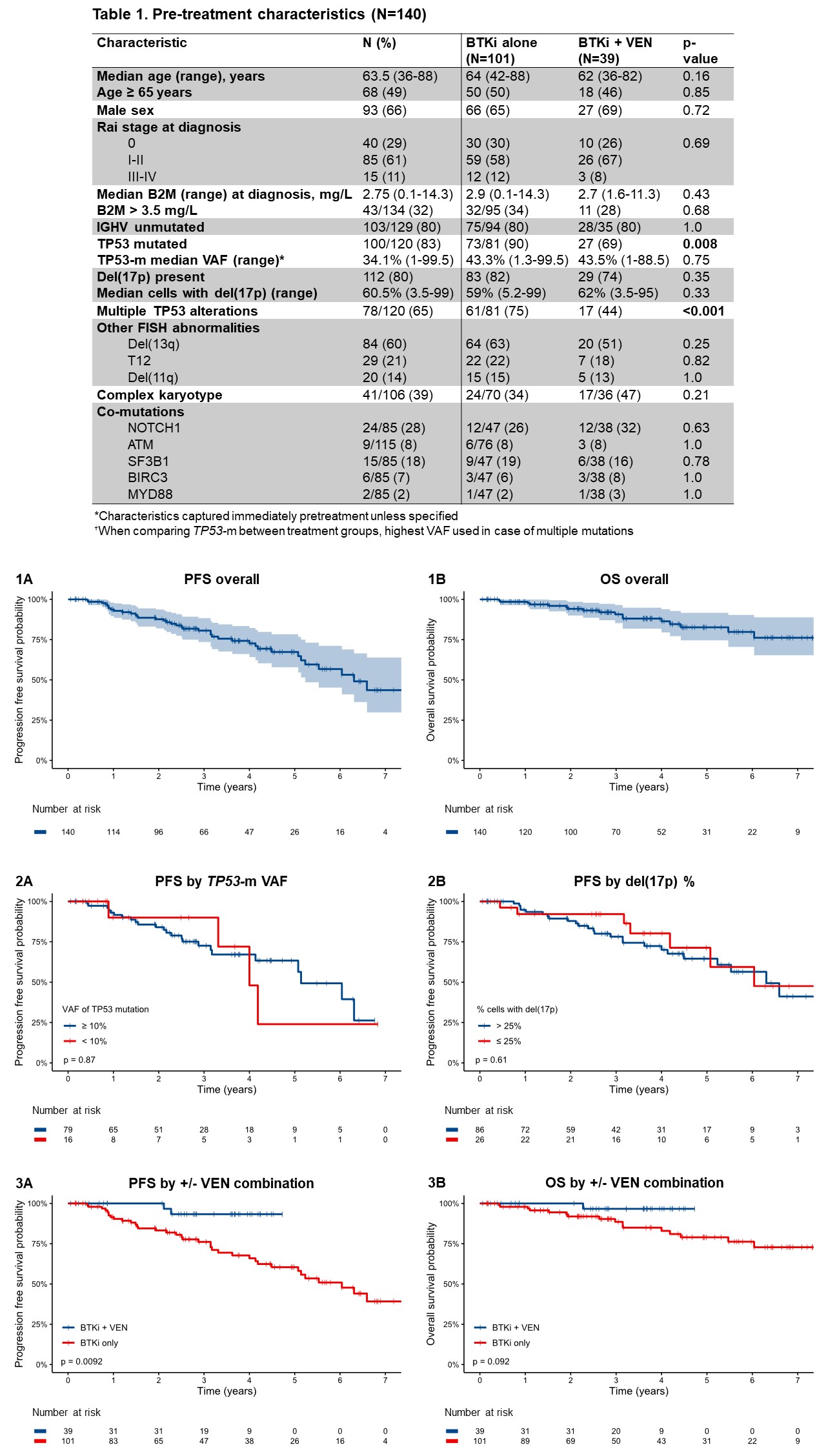