Cytokine release syndrome (CRS) and severe infection could both be fatal during the early stages of CAR T-cell therapy. The infection etiology spectra during the peri-CAR T-cell treatment period and the role of microbial metagenomic next-generation sequencing (mNGS) in distinguishing between infection and CRS, has not yet been thoroughly investigated. By means of high-throughput NGS technologies, mNGS detection is independent of clinical prospective preference, capable of multiple microbial detections and eliminates the influence of antibiotics on the results. However, the role of mNGS in CAR-T recipients with a febrile status has not yet been thoroughly investigated. CAR T-cell recipients that were included satisfied the following criteria during the peri-CAR T-cell treatment period: (i) they experienced recurrent fever higher than 38.5℃ (at least two recordings of an axillary temperature ≥38.5℃); and (ii) they received both mNGS and routine tests including microbial cultures, detection of pathogen-specific antibodies (serology) or antigens and molecular identification of microbial nucleic acids (DNA or RNA). We reviewed the patients from the 5 ongoing clinical trials in our center (ChiCTR-OPN-16008526, ChiCTR-OPN-16009847, ChiCTR-OPN-16009069, ChiCTR1800018137, NCT04888468 and NCT04888442,) and screened out those who satisfied the inclusion criteria. Finally, 102 patients (45 female and 57 male patients) who encountered recurrent fever during the peri- CAR T-cell therapy period were enrolled for analysis. They included 81 NHL patients, 16 B-ALL patients, 3 multiple myeloma (MM) and 2 CHL patients. The median age was 47.0 years (range, 13-69 years). 65.69% (67 in 102) of patients had received more than 3 lines of antitumor treatment prior to receiving lymphodepletion chemotherapy and CAR T-cell infusion. Inflammatory makers were analyzed for all patients. The inflammatory marker baseline (pre-lymphodepletion) was comparable between mild CRS group and severe CRS group.

This study, at first time, reveals that in most febrile CAR-T recipients, infection is a major etiology, with 77.45% (79/102) patients having at least one species of microbe in their peripheral blood. Of all the microbic species, viral infection was the most common, particularly in patients with mild CRS, in contrast to patients with severe CRS who had an increased risk of fungal infection. Due to its enhanced spectrum of microbiological diagnosis and efficiency, mNGS could represent an important complement to routine tests in standard clinical application. 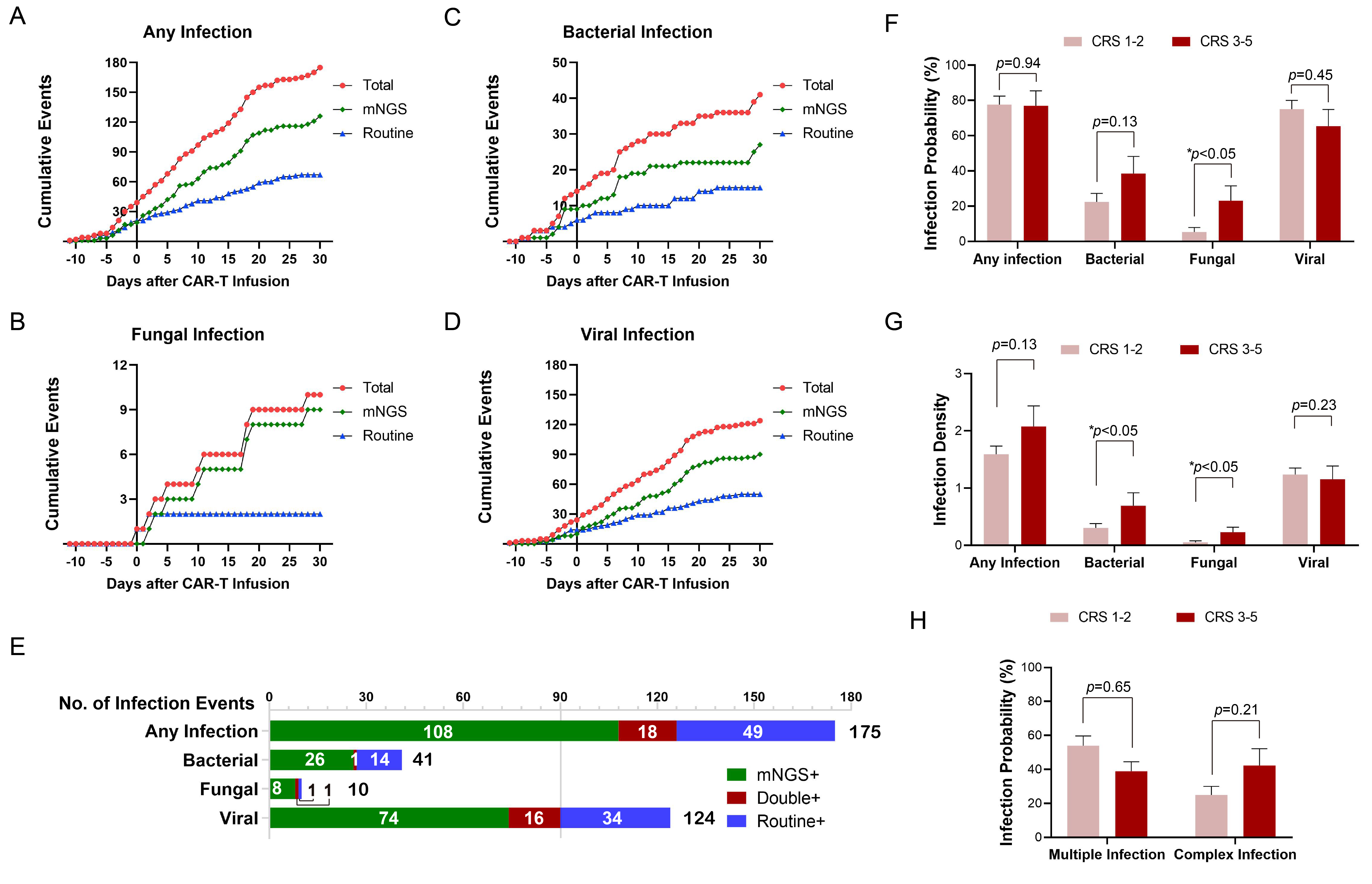