182 Survival of Mantle Cell Lymphoma in the Era of Bruton Tyrosine Kinase Inhibitors: A Population-Based Analysis

Background: Despite advances in chemoimmunotherapy and stem cell transplantation, mantle cell lymphoma (MCL) has historically been difficult to treat. Patients with advanced age and high-risk features (e.g. blastoid/pleomorphic features, high MIPI score, complex karyotype, TP53 mutation) face particularly poor outcomes with standard chemoimmunotherapy. Ibrutinib, a Bruton tyrosine kinase inhibitor (BTKi), was approved for second-line use in MCL in 2013. Other BTKis – acalabrutinib and zanubrutinib were approved in 2017 and 2019, respectively. BTKi provides a well-tolerated chemotherapy-free option for these hard-to-treat subgroups, especially the older patients. In this population-based study, we evaluated survival outcomes prior to and after the approval of ibrutinib, and hypothesized that survival benefit observed early after approval would be greatest in older patients not typically candidates for consolidative transplantation in the first-line setting.

Methods: Using the Surveillance, Epidemiology, and End Results database, we included all adult patients diagnosed with MCL in the years 2007-2018 and followed them to the end of 2018 or death, whichever came first. The pre-BTKi era was defined by year of diagnosis 2007-2011, and the BTKi era was between 2014 and 2018. The years 2012-2013 were considered as a “washout” period to allow practice change related to the approval of ibrutinib. As age plays an important role in treatment decisions, including whether to use consolidative transplantation, patients were divided based on age at diagnosis: <60, 60-69, 70-79, and ≥80 years. Outcomes of interest included all-cause mortality, and mortality from MCL (MFM). We applied multivariable Cox proportional hazards regression model for all-cause mortality, adjusting for age, sex, race, stage, and median household income at census level, and reported adjusted hazard ratio (HR) with 95% confidence interval (CI). We also conducted multivariable competing risk analyses for MFM, considering all other causes of death as the competing events, and reported subhazard ratio (sHR) with 95% CI. To eliminate potential confounding by duration of follow-up among patients diagnosed in different periods, we used only three-year follow-up data for primary analyses, and all available follow-up data for sensitivity analyses.

Conclusion: In this large population-based cohort analysis of individuals diagnosed with MCL, overall and lymphoma-specific survival improved in the BTKi era. At a median follow up of 2.4 years in our BTKi cohort, significant survival benefits were observed in those older than 60 but less than 80 years of age, and the observed benefits were greatest in the 70-79 age group. Future real-world studies should examine the impact of novel agents on treatment patterns and outcomes of MCL over a longer follow up period. 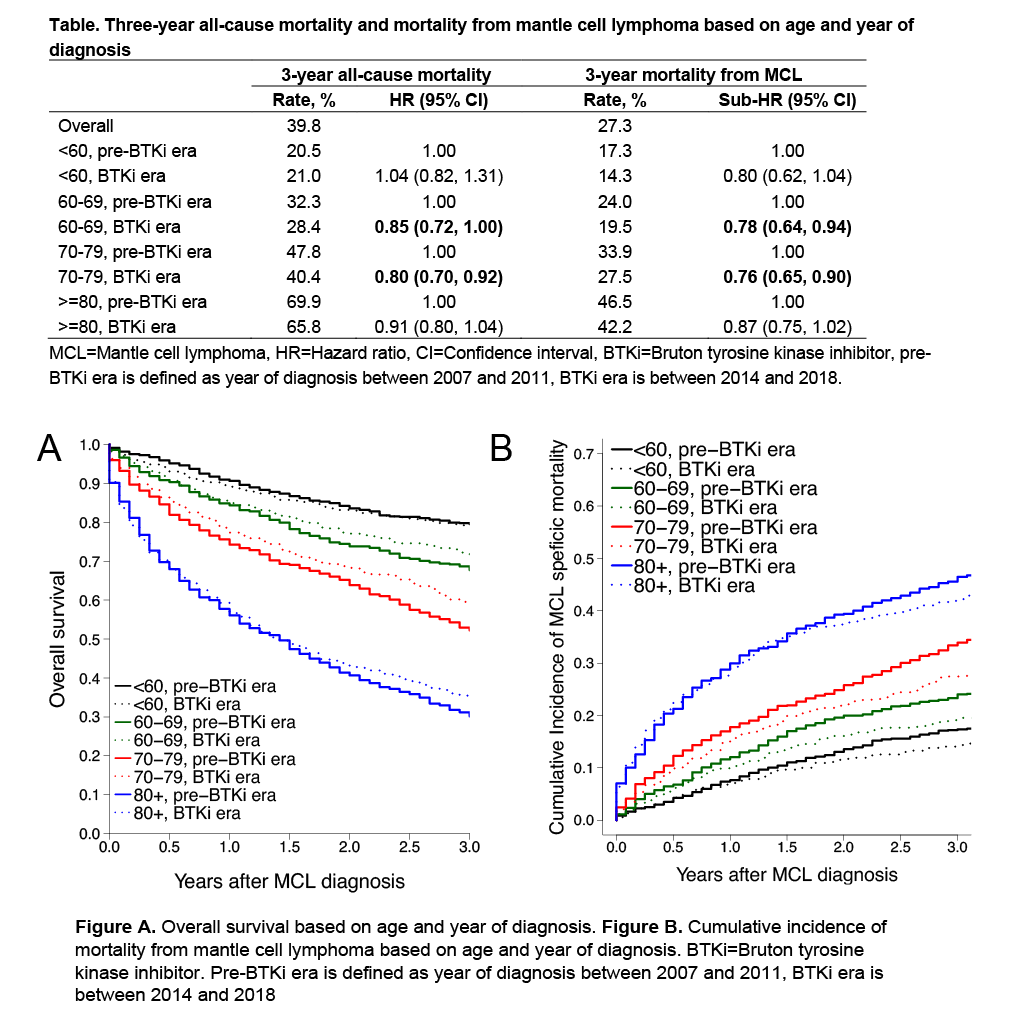