Background: A proportion of patient with monoclonal gammopathy of undetermined significance (MGUS) and smoldering multiple myeloma (SMM) will progress to active multiple myeloma (MM). Optimization of follow-up strategies and diagnostic testing is needed to detect those who are at risk of imminent progression since they may benefit from early treatment. There is a considerable need for biomarkers that can accurately reflect disease status and risk of progression to MM. In recent years, circulating tumor plasma cells (CTPC) have gained interest in disease monitoring for their promising prognostic significance and the minimally-invasive nature of blood sampling.

Aim: To evaluate the feasibility of using CTPC analysis by next-generation flow cytometry (NGF) for disease monitoring in precursor conditions of MM and early detection of progression to active MM.

Methods: Participants were enrolled from the Iceland Screens, Treats, or Prevents Multiple Myeloma study (iStopMM). The study is a population-based screening study for MM precursors and randomized trial of follow-up strategies that enrolled 80,579 Icelanders and screened 75,422 of participants by serum protein electrophoresis (SPEP) and free light chain (FLC) assay. A total of 2/3 of participants who had abnormal screening tests were invited to the study clinic to undergo assessment and testing to detect SMM and MM. All cases of SMM and MM and a random conveniency sample of participants with MGUS were eligible for a flow cytometry sub study. The Euroflow NGF MM-MRD method was used for quantitation of tumor PC in the bone marrow (BM) and CTPC in peripheral blood (PB). Paired BM and PB samples were collected at baseline or after SMM/MM diagnosis at the next scheduled BM sampling during follow-up. The Infinicyt software (Cytognos SL, Salamanca, Spain) was used for flow cytometry data analysis. The limit of detection (LOD) was set at ≥ 20 tumor PC in both BM and PB. The Mann-Whitney U test or the Kruskal-Wallis tests were used to assess statistical significance of differences observed between two or more than two groups, respectively.

Conclusion: This is the first study evaluating CTPC in a screened cohort of patients with precursor conditions of MM. We found the frequency of CTPC detection to be lower than has been previously reported in a study by Sanoja-Flores et al. in 2018 using the same NGF method, particularly for MGUS (18% vs 59% [n=150]) and SMM (74% vs 100% [n=26]). This difference can likely be attributed to a higher frequency of patients with less advanced disease in the screened cohort of the iStopMM study, suggested by markedly lower median M-component levels in this study (3.3 vs 6, 7.8 vs 21, and 16.2 vs 27 g/L for MGUS, SMM, and MM, respectively). We found that the number of CTPC progressively increased from MGUS to SMM and MM. Furthermore, a detectable CTPC population by NGF was associated with a higher percentage tumor PC in the BMPC compartment in both MGUS and SMM. A BMPC compartment that is highly dominated by tumor PC (>95%) has been reported to be associated with a higher risk of progression in both MGUS and SMM and in our study a CTPC population was detected in a vast majority of SMM patients with over 95% tumor PC. Taken together, these results confirm that the detection and number of CTPC by NGF is associated with a more advanced disease and that their detection by NGF may have a clinical utility in the follow-up of myeloma precursor disease. 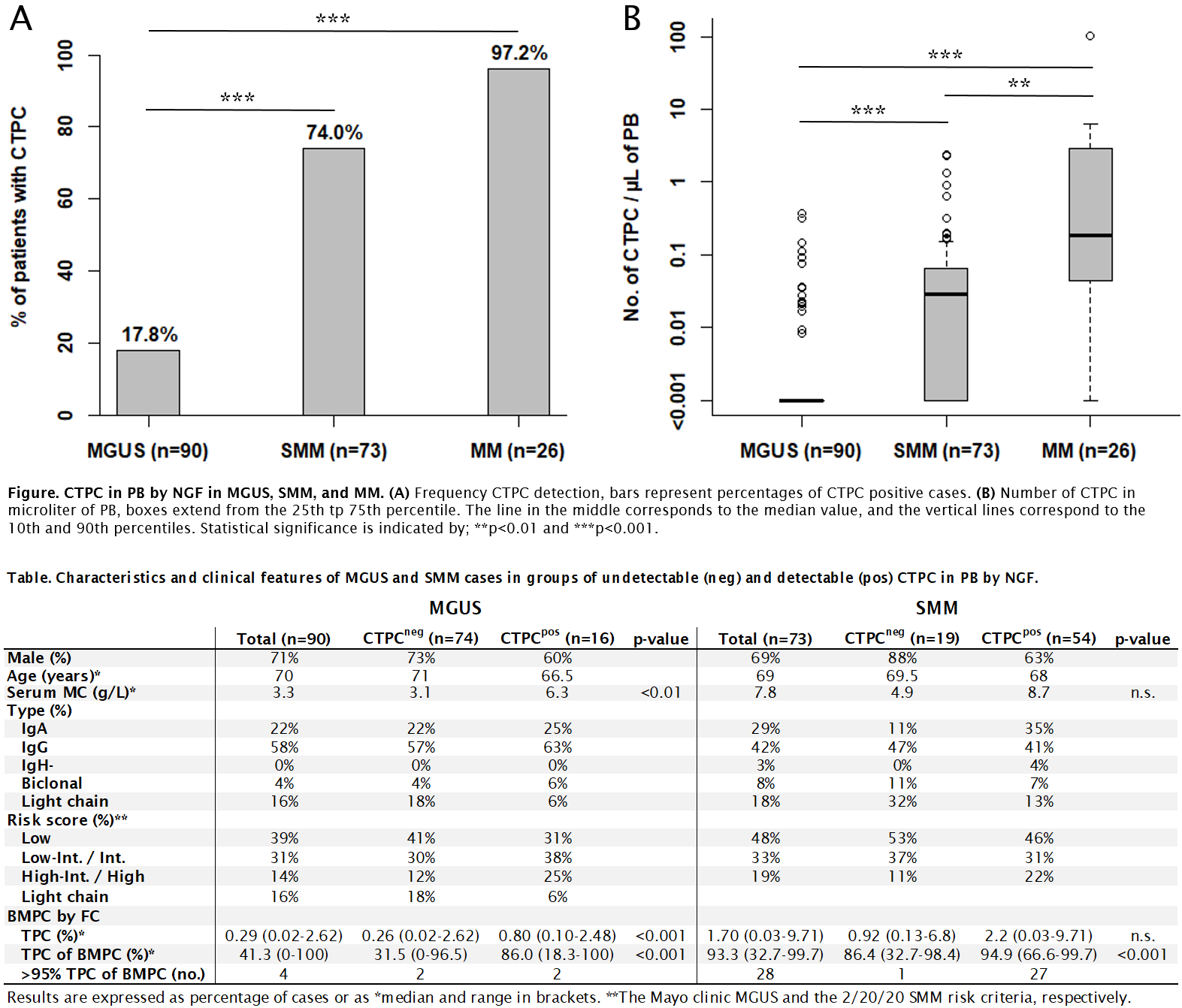