In the past decade outcome of adult ALL was improved significantly using pediatric-based chemotherapy in combination with risk-adapted stem cell transplantation (SCT) and targeted therapies. The GMALL Trial 08/2013 (NCT02881086) for patients (pts) aged 18-55 years (yrs) with newly diagnosed ALL/LBL has a BFM-based 2-phase induction, up to 8 cycles of PEG-asparaginase (ASP) with up to 7 cycles of HDMTX, HDAC, a reinduction phase and conventional maintenance up to 2.5 yrs. Two cycles Nelarabine are implemented for standard risk (SR) T-ALL. Pts with B-precursor-ALL (B-ALL) receive Rituximab independent of CD20 expression (Ph+ only if CD20+). Ph+ ALL pts receive Imatinib and a dose reduced induction (Vincristine, Dexamethasone, ASP). ASP is scheduled in induction 1 (IP1) (d 20) and 2 (d 34 for Ph+ and d 44 for Ph-) and dose is adapted to risk factors for hepatotoxicity. Pts with BMI>30 and/or liver steatosis receive 500 U/m2, whereas 2000 U/m2 is the standard dose. It is recommended to withhold the 2nd dose of ASP in case of clinically relevant ASP-associated toxicities. Pts with high-risk (HR) features (WBC > 30,000/µl in B-ALL, pro B-ALL-, KMT2A rearrangement, early/mature T-ALL) or Ph+ ALL are considered for SCT in CR1 after 1st consolidation (C1). Pts with MolFail (table 1) after C1 are candidates for targeted therapy (Blinatumomab, Nelarabin) followed by SCT. Randomization (R) I evaluates CNS irradiation versus i.th. prophylaxis in B- ALL/LBL. R II compares SCT versus SR therapy in HR pts with MolCR after induction. Both randomizations are blinded and not available for analysis. The trial is ongoing and scheduled to recruit 950 pts.

This large, ongoing prospective multicenter trial provides promising preliminary results. This applies also to those aged 45-55 yrs underlining that adult pts beyond the variable AYA definitions can benefit from pediatric-based therapy. Intensive and individualized ASP therapy was feasible. Whereas high HemCR rates were observed in nearly all subgroups, MolCR rates ranged from 41-74% and a relevant proportion remained MRD low positive underlining the need for detailed MRD classification. MRD-based targeted treatment was realized in a high proportion of pts. Responses to Blinatumomab in MolFail were lower compared to previous trials. Responses to Nelarabine in MolFail T-ALL pts were only 18%. OS of MolFail pts however was promising with the combination of targeted therapy and SCT. Thus, SCT is still a key component, contributing to improved outcomes although the overall proportion of SCT was lower than in previous GMALL trials. 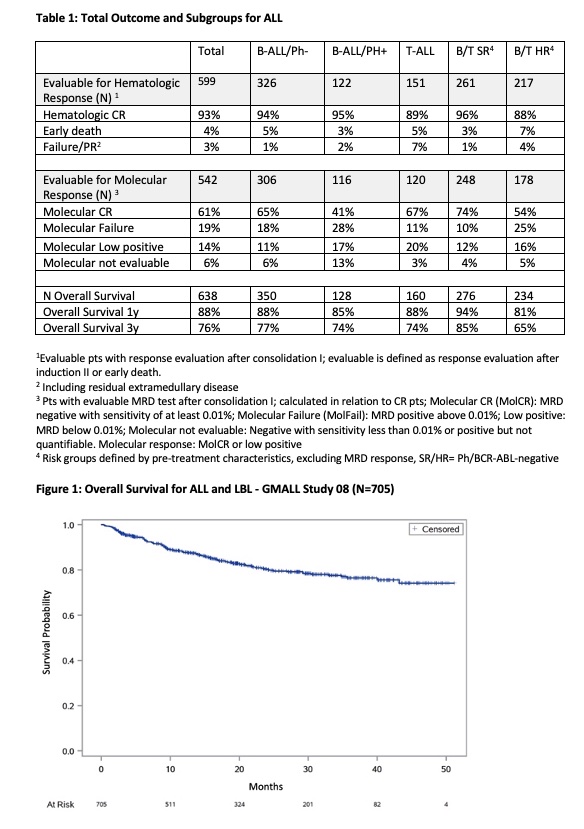