3603 Multicenter, Prospective and Retrospective Observational Cohort Study of Ponatinib in Patients with CML in Italy: Primary Analysis of the Oiti Trial

Background. Ponatinib is a third-generation tyrosine kinase inhibitor indicated for adults with resistant or intolerant chronic phase (CP), accelerated phase (AP), or blast phase (BP) chronic myeloid leukemia (CML) and Philadelphia chromosome-positive acute lymphoblastic leukemia, or those carrying the T315I mutation. Ponatinib has been commercially available since January 2015, yet there is a paucity of data on its use in the real-world setting. The goal of the Observational study of Iclusig® (ponatinib) Treatment in patients with CML in Italy (OITI) was to evaluate treatment patterns and outcomes, including safety and efficacy, in patients with CML treated in Italy since the approval of ponatinib.

Methods. This noninterventional study included patients aged ≥18 years with CP, AP, or BP CML who initiated ponatinib treatment in routine clinical practice across 26 Italian centers (academic and hospital settings). The study population comprised a prospective cohort, including patients who started treatment with ponatinib after site activation during the 12-month enrollment period; a retrospective cohort, including patients who started treatment with ponatinib but died or were lost to follow-up prior to site activation; and a retrospective/prospective cohort, including patients who started treatment with ponatinib prior to site activation and were still on treatment or in follow-up at the end of the study. Demographic, efficacy, and safety data were collected from patient medical charts at study entry and routine visits. The primary endpoint was the complete cytogenetic response (CCyR) rate in CP CML patients 6 months after starting ponatinib. In the absence of cytogenetic evaluation, molecular assessment was used, considering patients in MR2 or better to be in CCyR. Here, the primary analysis of all evaluable patients for the primary endpoint (median follow-up, 23.7 months [range, 1.3–70.8]) is presented.

Seventy-one (59.7%) patients had treatment-related adverse events (AEs), most commonly rash, hypertension (Grade 1–2), and thrombocytopenia (Grade 3). Treatment-related arterial occlusive events occurred in 2 (1.7%) patients. Dose modifications occurred in 77 patients: 37.1% were due to AEs, 13.5% were reductions after at least major cytogenetic response, 10.6% were increases due to lack of efficacy, 1.7% were medical decisions, and 37.1% were for other reasons. Thirty-three patients discontinued ponatinib due to AEs (33.3%), medical decisions (24.2%), and other reasons (42.4%), such as death, progression, and hematopoietic stem cell transplantation.

Conclusions. This observational study demonstrates that ponatinib has a favorable efficacy and safety profile in patients with CML treated in standard clinical practice. By 6 months, 74.8% of evaluable patients were in CCyR and 52.3% achieved at least MMR. Further, the probability of survival at 2 years was >88%. No new safety signals emerged with ponatinib treatment compared to prior studies. The early use of ponatinib and careful dose selection appear key to the safety and efficacy outcomes observed in this real-world study. 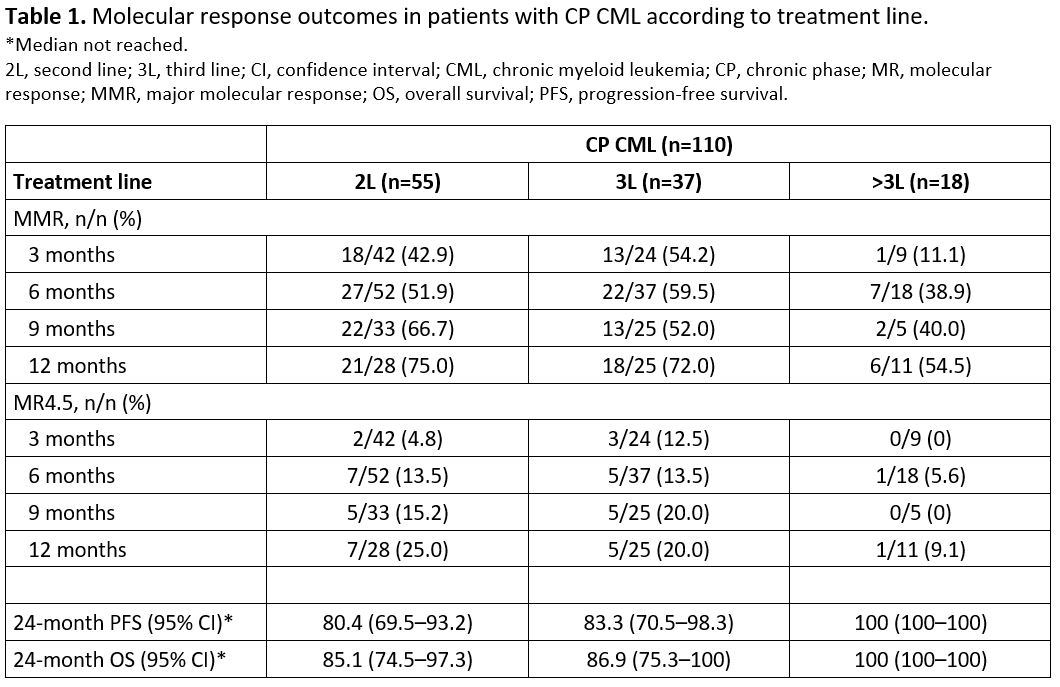