Background: Liposomal daunorubicin/cytarabine (CPX-351) and hypomethylating agent+venetoclax (HMA+V) have shown survival advantage as frontline therapies for older and biologically adverse AML. Although HMA+V is approved for chemotherapy ineligible pts, there is increased use of the combination in older fit pts. with biologically adverse AML. However, clinical outcomes between the two treatments have not been compared and will have a major clinical impact. Our aim was to compare CPX-351 vs HMA+V as upfront treatment for newly diagnosed AML using a multi-center retrospective study.

Methods: This is a multicenter retrospective study drawing from 4 large U.S. academic medical centers (Weill Cornell, Northwestern, Moffitt, Memorial Sloan Kettering). Eligibility included pts who received either CPX-351 or HMA+V as frontline therapy for AML. Response was determined using ELN 2017 guidelines. To evaluate the association between treatment type and categorical factors of interest, and the primary outcome variable of treatment response, the chi-square test or Fisher’s exact test was used. For the outcome variable of bone marrow response status, multivariable logistic regression analysis was performed. For the relapse free survival (RFS) and overall survival (OS) outcomes, Kaplan-Meier survival analysis was performed, and the log-rank test was employed to compare between categories of treatment-type and prognostic factors of interest. Multivariable cox proportional hazards regression analysis was performed to assess the independent effect of treatment and demographic/prognostic factors of interest on outcomes of RFS/OS.

Among pts aged 60-75 years, 47.7% and 19% of patients underwent HSCT in CPX-351 and HMA+V groups (p<0.001). Because HSCT was a significant predictor for RFS and OS (p<0.001), we conducted multivariable analysis in pts aged 60-75 years who did not receive a transplant and found no difference in OS (HR 0.99, p=0.96, 95% CI 0.68-1.43). There was no difference in RFS and OS post-transplant between CPX-351 and HMA+V groups (OS: 64 vs NA months, p=0.69). RFS could not be inferred statistically due to small number of patients transplanted in the HMA+V group. Our study will be further expanded to include additional centers and comorbidity analyses.

Conclusion: Our analysis demonstrated significant difference in OS favoring CPX-351 in the overall cohort and in several clinical subgroups, while no difference in CR+CRi and RFS was seen. The survival advantage in the CPX-351 group may be due to higher HSCT rates in CPX-351 treated pts. Among pts that did not proceed to HSCT, there was no difference in CR+CRi, RFS and OS between the treatment groups. We suspect that greater HSCT rates in the CPX-351 cohort were due to fewer comorbidities among CPX-351-treated pts or other biases, and comorbidity analyses are pending and will be reported. 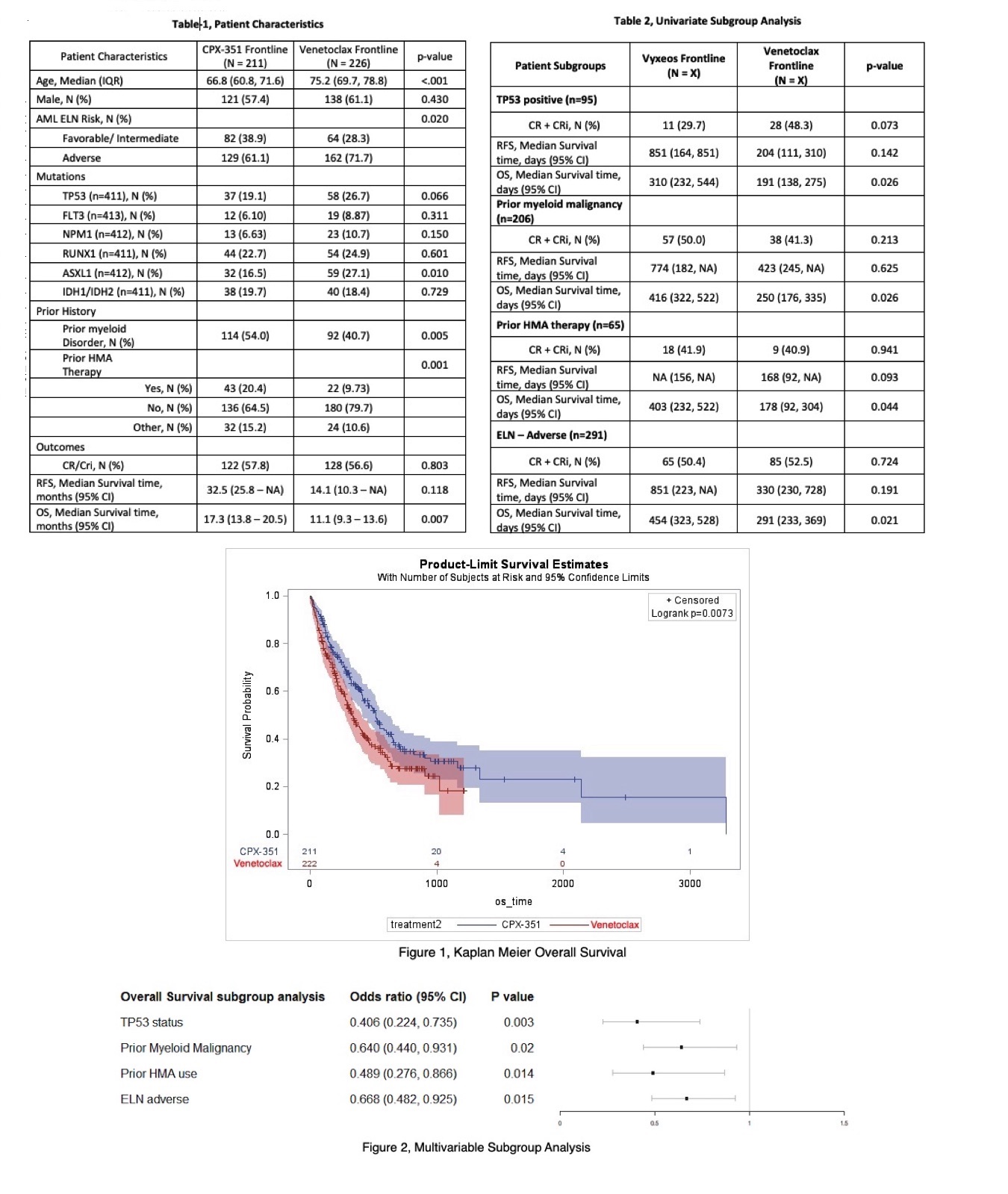