Background and Objective: Daratumumab, a CD38 monoclonal antibody, was approved for the treatment of multiple myeloma (MM) among previously treated patients in 2015, and among newly diagnosed patients in 2018. While the safety and efficacy of daratumumab has been well documented in clinical trials, there is limited real world information on the use and outcomes of daratumumab in patients of different races. This is of particular relevance for potential health care disparities, as evidence suggests that African American patients with MM receive new therapies later in their disease and may experience different outcomes than White patients (Blood Adv. 2019;3:2986-94, Cancer Med. 2017;6: 2876–85). Therefore, we sought to describe patient characteristics, treatment patterns and outcomes of patients with MM who received daratumumab. Results were stratified by race (i.e., Black vs. White).

Methods: We conducted a retrospective chart review of patients with MM initiating daratumumab between 1/2018 and 5/2020. De-identified data were retrieved from two U.S. clinical sites, Levine Cancer Institute (Atrium Health) and Weill Cornell Medicine. Patients were included if they had a confirmed diagnosis of MM and were at least 18 years old at the time of daratumumab initiation (index date). Patients who accessed daratumumab through interventional clinical trials were excluded.

Patients were followed from the index date until death, loss to follow-up, or date of chart abstraction, whichever occurred first. Patient characteristics included age, sex, body mass index, MM stage at diagnosis, cytogenetic profile as of the index date, and number of prior regimens. Treatment patterns included type and duration of daratumumab-based regimen. Treatment outcomes included treatment response (as per physician notes and guided by the International Myeloma Working Group consensus criteria) and time to next line of therapy (TTNT; the time between the index date and the initiation of the following line of therapy, censoring at the end of follow-up). All analyses were descriptive and stratified by race.

Results: A total of 252 patient charts were extracted: 89 Black (35.3%) and 163 White (64.7%). Black patients were, on average, younger at diagnosis (61.7 years old vs. 67.0) and at the index date (Table 1). The proportion of females was similar across both races (Black: 44.9%, White: 46.6%), and mean body mass index was slightly higher in Black patients (28.7 vs. 26.8). Black patients had longer time between initial MM diagnosis and initiation of daratumumab (43.2 vs. 34.1 months). MM stage at diagnosis, cytogenetic profile at index, and prior regimens were similar between White and Black patients (Table 1). While unknown cytogenetics were most common for both White (45.4%) and Black (59.6%) patients, White patients (20.2%) were twice as likely as Blacks (9.0%) to have high-risk cytogenetics. Black patients received more lines of treatment prior to the initiation of daratumumab (mean 2.9 vs. 2.3), with 55.1% of Black patients receiving 3 or more prior lines.

The most common regimen was daratumumab with pomalidomide and dexamethasone (DPd) for both races (Table 1), with use of DPd being particularly common (51.7%) in Black patients. Duration of treatment with daratumumab was similar across races (Table 1). Treatment response was similar across races: among patients initiating daratumumab in first, second and third line or after, respectively, overall response rate was 100.0%, 90.9% and 67.6% for Black patients and 100.0%, 82.9% and 65.4% for White patients. Among patients initiating daratumumab in third line or after, median TTNT was 12.3 months among Black patients and 10.4 months among White patients.

Conclusions: Black and White patients had similar overall response rate and comparable TTNT. However, Black patients initiated daratumumab later in their treatment, with more than half of Black patients initiating daratumumab in fourth or later line of therapy, and a lower percentage of Black patients had high-risk cytogenetics, suggesting a potential discrepancy in access to new therapies for MM. These findings were observed in a relatively modest sample size, and therefore interpretation warrants caution. Future studies should investigate whether such a discrepancy in treatment access exists, potential reasons for this discrepancy, and strategies to mitigate the effect of race on access to new therapies in MM. 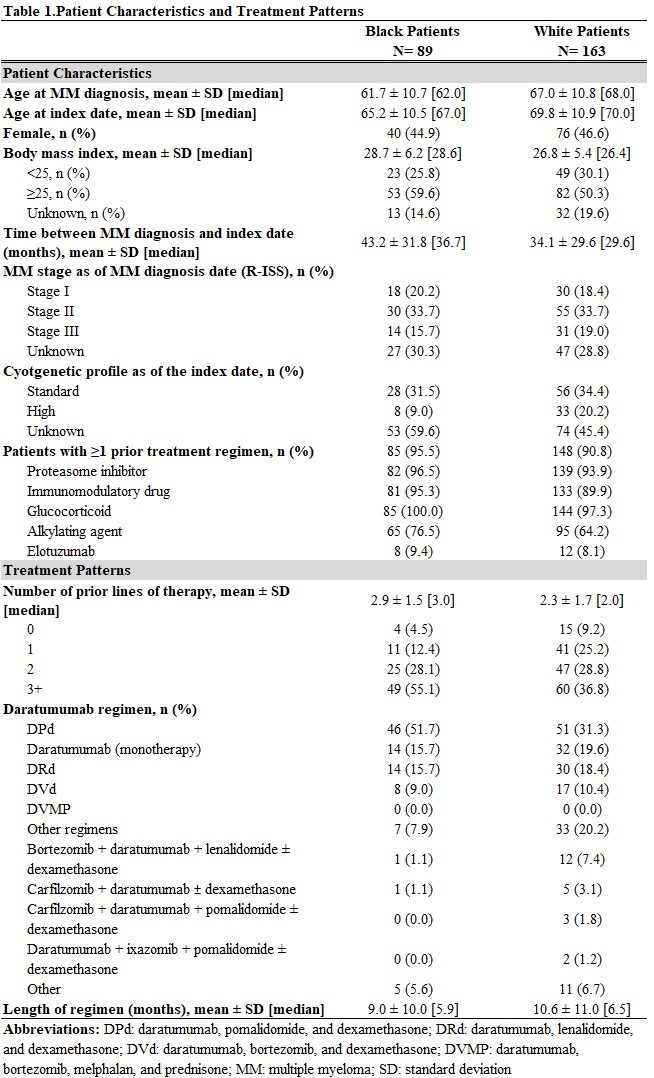