Introduction: TG-1701 is an irreversible, selective, novel Bruton's tyrosine kinase inhibitor (BTKi) administered once daily (QD). BTK inhibitors, as well as the U2 combination (anti-CD20 mAb ublituximab + the PI3Kδ-CK1ε inhibitor umbralisib), are highly efficacious in chronic lymphocytic leukemia (CLL), each of which have been previously demonstrated to be superior over standard chemoimmunotherapy. Treatment with a more selective BTK inhibitor could result in improved efficacy and safety outcomes compared with ibrutinib (ALPINE study, EHA 2021), and we hypothesized that dual blockade of the B-cell receptor (BCR) pathway through combination of TG-1701 with U2 may confer greater depth of response compared to either regimen alone.

Among the 36 patients treated with U2+1701, 19 were evaluable for efficacy and safety (17 too early to evaluate). The median age was 69 years (range 47-81), and 56% were male. TG-1701+U2 was well tolerated at 4 different dose levels without dose-limiting toxicities. The most common (>30%) all-causality, all grade treatment-emergent adverse events (TEAEs) were diarrhea (53%) contusion (42%), nausea (37%), hypertension, ALT/AST increase, and fatigue (all 32% each) with TG-1701+U2. Grade 3/4 AEs >15% were limited to ALT/AST increase (21%). Dose reduction occurred in 1 patient due to an AE, and 4 patients discontinued at least 1 study drug due to an AE: 2 discontinued umbralisib, 1 discontinued umbralisib and TG-1701, and 1 discontinued all 3 agents. At the data cut-off, overall response rate (ORR) was 84% (4 CR and 12 PR) among 19 evaluable patients, with remaining patients awaiting post-baseline assessment.

In the monotherapy CLL-specific cohorts (200 mg QD, n=20; and 300 mg QD, n=20), 40 pts were evaluable for safety, and 39 for efficacy (1 pt withdrew due to COVID prior to first response assessment). The median age was 71 (range 49-86), and 43% were male. The most common TEAEs were increased ALT/AST (all grades: 18%; grade ≥3: 3%), followed by diarrhea (all grades: 15%; grade ≥3: none), and neutropenia (all grades: 13%; grades ≥3: 13%). There were no cases of atrial fibrillation, major bleeding, or ventricular tachyarrhythmia in the CLL cohorts at a median follow-up of 12.8 months (range 2.5 - 20.8). TEAEs leading to TG-1701 dose reduction occurred in 1 (3%) patient. No patients in the 200 mg or 300 mg CLL cohorts have discontinued due to AEs. In patients with anemia and thrombocytopenia at baseline, sustained improvement in hematologic variables was observed. The ORR among 39 patients was 97% (all PR/PR-L). Lymphocytosis resolved to normal value or <50% of baseline in 69% (24 of 35 of patients with lymphocytosis). Consistent response rates were observed across all subgroups, including the following high-risk genomic features: del17p/TP53 mutations, unmutated immunoglobulin heavy-chain variable-region (IGHV), and complex karyotype (defined as 3 ≤cytogenetic abnormalities).

The median duration of response has not been reached in either cohort. Best change in tumor burden from baseline in patients with CLL is presented in Figure 1.

Conclusions: TG-1701 exhibits an encouraging safety and efficacy profile as monotherapy in patients with CLL and additionally shows promising activity and a manageable tolerability profile in combination with U2. Future registration trials are being planned in CLL with TG-1701. Recruitment to this study (NCT03671590) continues. 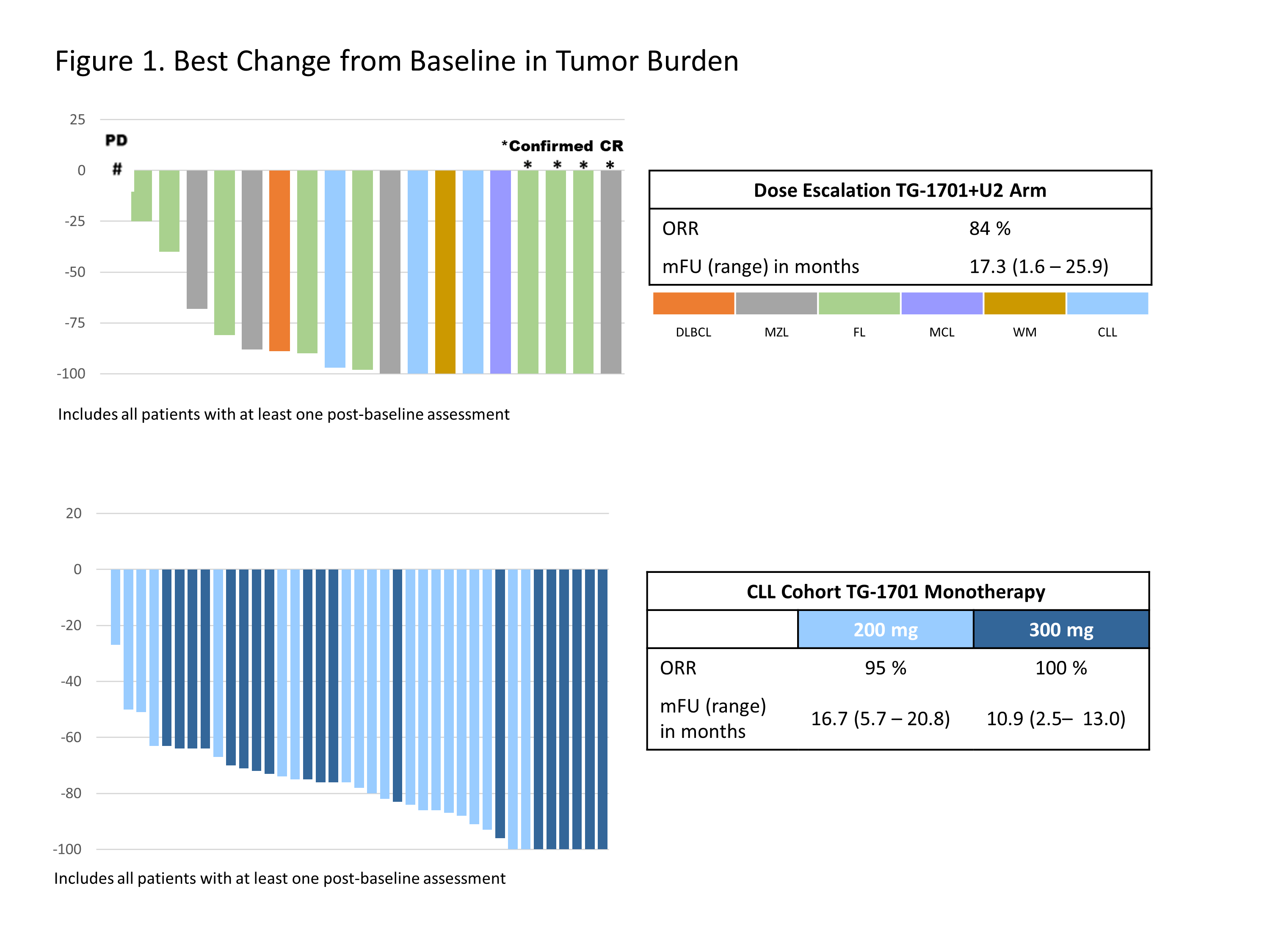